Brain may flush out toxins during sleep

A good night’s rest may literally clear the mind. Using mice, researchers showed for the first time that the space between brain cells may increase during sleep, allowing the brain to flush out toxins that build up during waking hours. These results suggest a new role for sleep in health and disease. The study was funded by the National Institute of Neurological Disorders and Stroke (NINDS), part of the NIH.

“Sleep changes the cellular structure of the brain. It appears to be a completely different state,” said Maiken Nedergaard, M.D., D.M.Sc., co-director of the Center for Translational Neuromedicine at the University of Rochester Medical Center in New York, and a leader of the study.

For centuries, scientists and philosophers have wondered why people sleep and how it affects the brain. Only recently have scientists shown that sleep is important for storing memories. In this study, Dr. Nedergaard and her colleagues unexpectedly found that sleep may be also be the period when the brain cleanses itself of toxic molecules.

“It’s as if Dr. Nedergaard and her colleagues have uncovered a network of hidden caves and these exciting results highlight the potential importance of the network in normal brain function,” said Roderick Corriveau, Ph.D., a program director at NINDS.

Initially the researchers studied the system by injecting dye into the CSF of mice and watching it flow through their brains while simultaneously monitoring electrical brain activity. The dye flowed rapidly when the mice were unconscious, either asleep or anesthetized. In contrast, the dye barely flowed when the same mice were awake.

“We were surprised by how little flow there was into the brain when the mice were awake,” said Dr. Nedergaard. “It suggested that the space between brain cells changed greatly between conscious and unconscious states.”

To test this idea, the researchers inserted electrodes into the brain to directly measure the space between brain cells. They found that the space inside the brains increased by 60 percent when the mice were asleep or anesthetized.

“These are some dramatic changes in extracellular space,” said Charles Nicholson, Ph.D., a professor at New York University’s Langone Medical Center and an expert in measuring the dynamics of brain fluid flow and how it influences nerve cell communication.

Certain brain cells, called glia, control flow through the glymphatic system by shrinking or swelling. Noradrenaline is an arousing hormone that is also known to control cell volume. Similar to using anesthesia, treating awake mice with drugs that block noradrenaline induced unconsciousness and increased brain fluid flow and the space between cells, further supporting the link between the glymphatic system and consciousness.

Previous studies suggest that toxic molecules involved in neurodegenerative disorders accumulate in the space between brain cells. In this study, the researchers tested whether the glymphatic system controls this by injecting mice with labeled beta-amyloid, a protein associated with Alzheimer’s disease, and measuring how long it lasted in their brains when they were asleep or awake. Beta-amyloid disappeared faster in mice brains when the mice were asleep, suggesting sleep normally clears toxic molecules from the brain.

“These results may have broad implications for multiple neurological disorders,” said Jim Koenig, Ph.D., a program director at NINDS. “This means the cells regulating the glymphatic system may be new targets for treating a range of disorders.”

The results may also highlight the importance of sleep.

“We need sleep. It cleans up the brain,” said Dr. Nedergaard.

For more information about neurological disorders and the latest neuroscience research: http://www.ninds.nih.gov 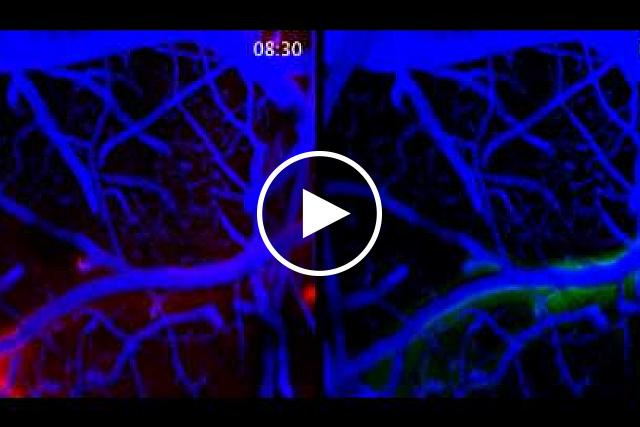 Brain Opens Up The Pipes During Sleep: Scientists watched dye flow through the glymphatic system, a brain "plumbing" system, of a mouse when it was asleep (left) and then, later, when it was awake (right). More dye flowed into the brain during sleep. Results from this study suggest the brain may flush out toxic molecules associated with neurodegenerative disorders during sleep.