Preliminary results suggest anti-COVID19 nanobodies may be effective at preventing and diagnosing infections.

National Institutes of Health researchers have isolated a set of promising, tiny antibodies, or “nanobodies,” against SARS-CoV-2 that were produced by a llama named Cormac. Preliminary results published in Scientific Reports suggest that at least one of these nanobodies, called NIH-CoVnb-112, could prevent infections and detect virus particles by grabbing hold of SARS-CoV-2 spike proteins. In addition, the nanobody appeared to work equally well in either liquid or aerosol form, suggesting it could remain effective after inhalation. SARS-CoV-2 is the virus that causes COVID-19.

The study was led by a pair of neuroscientists, Thomas J. “T.J.” Esparza, B.S., and David L. Brody, M.D., Ph.D., who work in a brain imaging lab at the NIH’s National Institute of Neurological Disorders and Stroke (NINDS).

“For years TJ and I had been testing out how to use nanobodies to improve brain imaging. When the pandemic broke, we thought this was a once in a lifetime, all-hands-on-deck situation and joined the fight,” said Dr. Brody, who is also a professor at Uniformed Services University for the Health Sciences and the senior author of the study. “We hope that these anti-COVID-19 nanobodies may be highly effective and versatile in combating the coronavirus pandemic.”

A nanobody is a special type of antibody naturally produced by the immune systems of camelids, a group of animals that includes camels, llamas, and alpacas. On average, these proteins are about a tenth the weight of most human antibodies. This is because nanobodies isolated in the lab are essentially free-floating versions of the tips of the arms of heavy chain proteins, which form the backbone of a typical Y-shaped human IgG antibody. These tips play a critical role in the immune system’s defenses by recognizing proteins on viruses, bacteria, and other invaders, also known as antigens.

Because nanobodies are more stable, less expensive to produce, and easier to engineer than typical antibodies, a growing body of researchers, including Mr. Esparza and Dr. Brody, have been using them for medical research. For instance, a few years ago scientists showed that humanized nanobodies may be more effective at treating an autoimmune form of thrombotic thrombocytopenic purpura, a rare blood disorder, than current therapies. 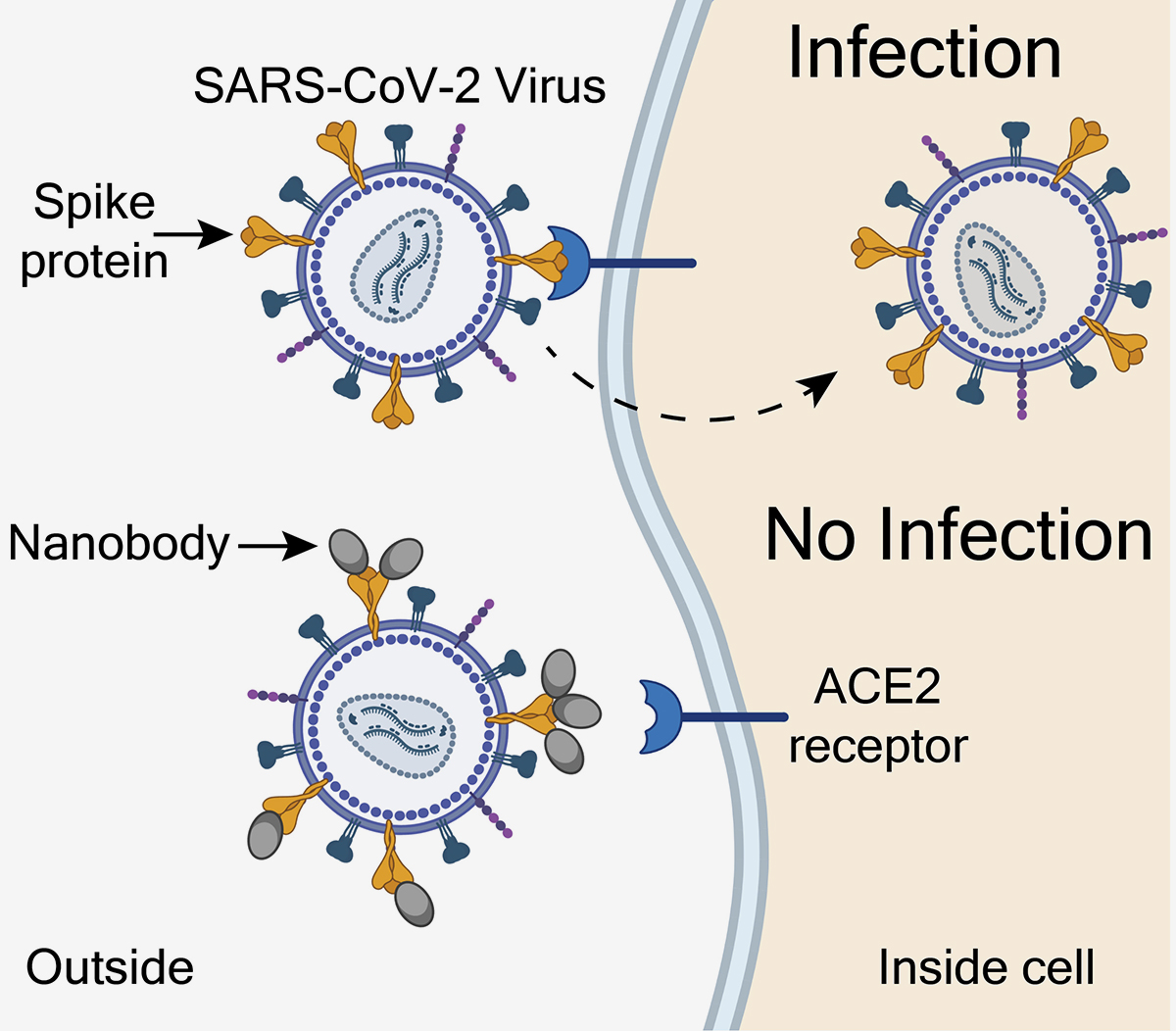 Infections happen when SARS-CoV-2 virus spike proteins (yellow) latch onto ACE2 receptors (blue) that line the outside of a cell. The NIH nanobodies (grey) may prevent infections by covering spike proteins, which blocks binding to the ACE2 receptor. Brody lab, NIH/NINDS

Since the pandemic broke, several researchers have produced llama nanobodies against the SARS-CoV-2 spike protein that may be effective at preventing infections. In the current study, the researchers used a slightly different strategy than others to find nanobodies that may work especially well.

“The SARS-CoV-2 spike protein acts like a key. It does this by opening the door to infections when it binds to a protein called the angiotensin converting enzyme 2 (ACE2) receptor, found on the surface of some cells,” said Mr. Esparza, who is also an employee of the Henry M. Jackson Foundation for the Advancement of Military Medicine and the lead author of the study. “We developed a method that would isolate nanobodies that block infections by covering the teeth of the spike protein that bind to and unlock the ACE2 receptor.”

To do this, the researchers immunized Cormac five times over 28 days with a purified version of the SARS-CoV-2 spike protein. After testing hundreds of nanobodies they found that Cormac produced 13 nanobodies that might be strong candidates.

Initial experiments suggested that one candidate, called NIH-CoVnb-112, could work very well. Test tube studies showed that this nanobody bound to the ACE2 receptor 2 to 10 times stronger than nanobodies produced by other labs. Other experiments suggested that the NIH nanobody stuck directly to the ACE2 receptor binding portion of the spike protein. 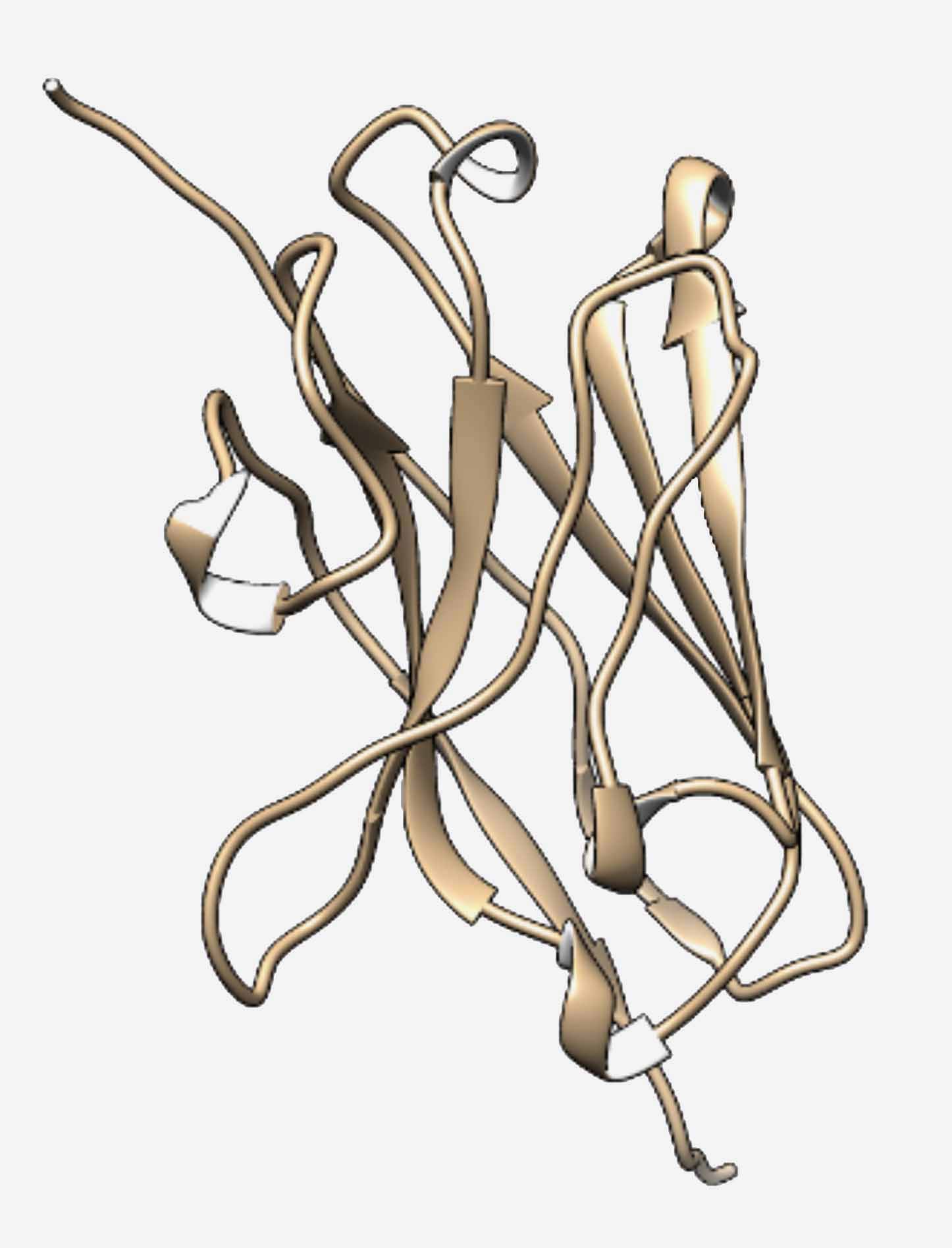 Anti-COVID-19 nanobodies from a llama may be an effective tool in the battle against the COVID-19 virusBrody lab NIH/NINDS.

Then the team showed that the NIH-CoVnB-112 nanobody could be effective at preventing coronavirus infections. To mimic the SARS-CoV-2 virus, the researchers genetically mutated a harmless “pseudovirus” so that it could use the spike protein to infect cells that have human ACE2 receptors. The researchers saw that relatively low levels of the NIH-CoVnb-112 nanobodies prevented the pseudovirus from infecting these cells in petri dishes.

Importantly, the researchers showed that the nanobody was equally effective in preventing the infections in petri dishes when it was sprayed through the kind of nebulizer, or inhaler, often used to help treat patients with asthma.

“One of the exciting things about nanobodies is that, unlike most regular antibodies, they can be aerosolized and inhaled to coat the lungs and airways,” said Dr. Brody.

The team has applied for a patent on the NIH-CoVnB-112 nanobody.

“Although we have a lot more work ahead of us, these results represent a promising first step,” said Mr. Esparza. “With support from the NIH we are quickly moving forward to test whether these nanobodies could be safe and effective preventative treatments for COVID-19. Collaborators are also working to find out whether they could be used for inexpensive and accurate testing.”