Home » About NIH » What We Do » The NIH Almanac 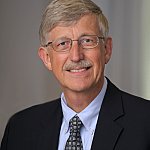 Francis S. Collins, M.D., Ph.D., a physician-geneticist noted for his landmark discoveries of disease genes and his leadership of the Human Genome Project, served as Director of the National Human Genome Research Institute (NHGRI) at the National Institutes of Health from 1993-2008. Read Dr. Collins' full biosketch.

Appointment of the NIH Director