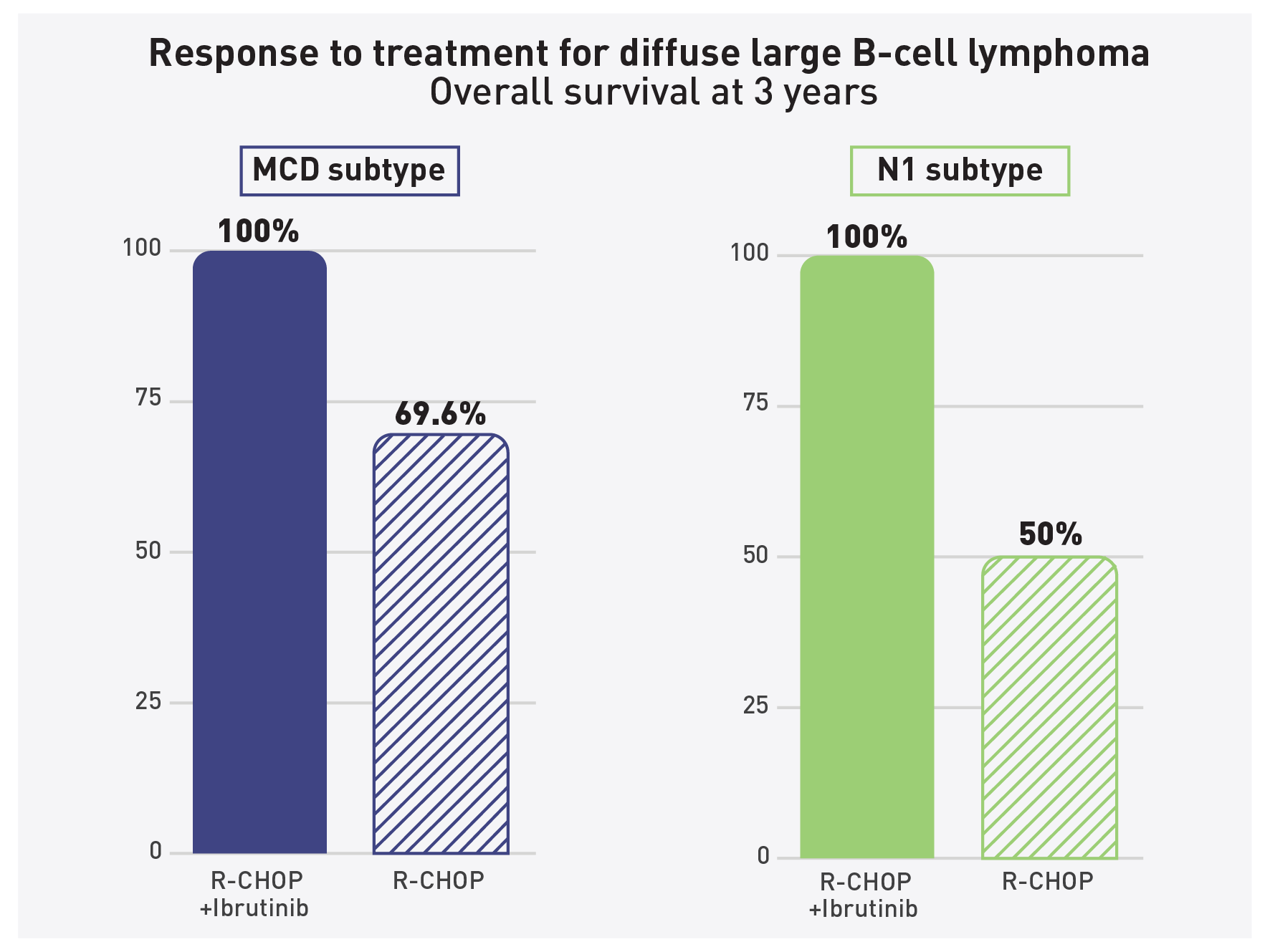 Younger patients with specific genetic subtypes of non-GCB DLBCL, called MCD and N1, had an exceptional response to the treatment combination.

New evidence suggests that adding the targeted therapy ibrutinib (Imbruvica) to a standard chemotherapy regimen can improve how long some younger people with a specific form of diffuse large B-cell lymphoma (DLBCL) live. The findings, published Nov. 4, 2021, in Cancer Cell, come from a new analysis by researchers at the National Cancer Institute (NCI), part of the National Institutes of Health, of a previously conducted phase 3 clinical trial.

Initial results from that study, known as the PHOENIX trial, showed that combining ibrutinib with the standard chemotherapy regimen did not help patients with a form of DLBCL called non-GCB DLBCL to live longer overall. However, by analyzing tumor biopsy samples from patients on the trial, NCI researchers and their collaborators have now shown that younger patients with specific genetic subtypes of non-GCB DLBCL, called MCD and N1, had an exceptional response to the treatment combination, with all such patients alive without disease three years after diagnosis.

“People thought the trial didn’t work,” said Louis M. Staudt, M.D., Ph.D., chief of the Lymphoid Malignancies Branch in the Cancer for Cancer Research at NCI. “But there was something interesting going on — if you just considered younger patients under the age of 60, they had a real benefit from ibrutinib, and we now understand why.”

“This new analysis provides a compelling rationale for doctors to consider adding ibrutinib to standard chemotherapy for the initial treatment of younger patients with non-GCB DLBCL,” said Wyndham H. Wilson, M.D., Ph.D., senior investigator in the Lymphoid Malignancies Branch and a co-author of the study.DLBCL is the most common type of lymphoma, accounting for 40% of lymphoma cases worldwide. This fast-growing cancer affects B cells, a type of white blood cell, and usually starts in the lymph nodes.  People with DLBCL are typically treated with a chemotherapy regimen known as R-CHOP that includes cyclophosphamide, doxorubicin, vincristine, prednisone, and the monoclonal antibody rituximab. But R-CHOP is not effective for all people with DLBCL.

In the 2000s, to better understand individual variation in treatment response, researchers analyzed the patterns of gene activity in DLBCL tumors. They discovered that there are three molecular subgroups of DLBCL: germinal center B cell–like (GCB), activated B cell–like (ABC), and unclassified. Researchers later found that these subgroups respond differently to chemotherapy. More recently, researchers showed that the ABC and GCB subgroups can be further divided into seven genetic subtypes that also respond differently to chemotherapy.

Ibrutinib was the first targeted therapy to be evaluated for the treatment of DLBCL. The drug works by blocking the activity of Bruton tyrosine kinase, a protein that is involved in the growth and survival of B cells. Cancer cells of ABC DLBCL require this protein to survive. In a previous phase 2 clinical trial involving patients with relapsed DLBCL, researchers found that treatment with ibrutinib alone resulted in tumor shrinkage in 37% of patients with the ABC type but only 5% of those with the GCB type.

What was unclear from the PHOENIX trial was whether all younger patients with non-GCB DLBCL benefited from ibrutinib, or if there was greater benefit for patients with certain genetic subtypes. To gain insights into this question, researchers performed genetic analyses on tumor samples from 773 of the 838 participants and determined their subtypes using an algorithm called LymphGen that Dr. Staudt developed with his NCI colleague George Wright, Ph.D.

Younger patients with the BN2 genetic subtype did not appear to benefit from the addition of ibrutinib. However, that subtype already had an 82% overall survival rate with R-CHOP alone.

In addition to the exceptional response rate in MCD and N1 DLBCL, ibrutinib did provide benefit for some other younger patients with non-GCB DLBCL. More research is needed to determine whether the A53 subtype — which the researchers could not identify in this study because of technical reasons — falls into this category.

Although no tests are commercially available to identify the MCD and N1 subtypes, Dr. Staudt pointed out that the identification of non-GCB DLBCL is done routinely.

“For years we have only had chemotherapy and rituximab to offer these patients,” he said. “Now, we hope that adding ibrutinib to current therapy may give younger patients a better chance of surviving this aggressive cancer.”

This study was supported by the Intramural Research Programs of NIH and NCI. Janssen Research and Development, LLC, sponsored the PHOENIX trial.

About the National Cancer Institute (NCI): NCI leads the National Cancer Program and NIH’s efforts to dramatically reduce the prevalence of cancer and improve the lives of cancer patients and their families, through research into prevention and cancer biology, the development of new interventions, and the training and mentoring of new researchers. For more information about cancer, please visit the NCI website at cancer.gov or call NCI’s contact center, the Cancer Information Service, at 1-800-4-CANCER (1-800-422-6237).