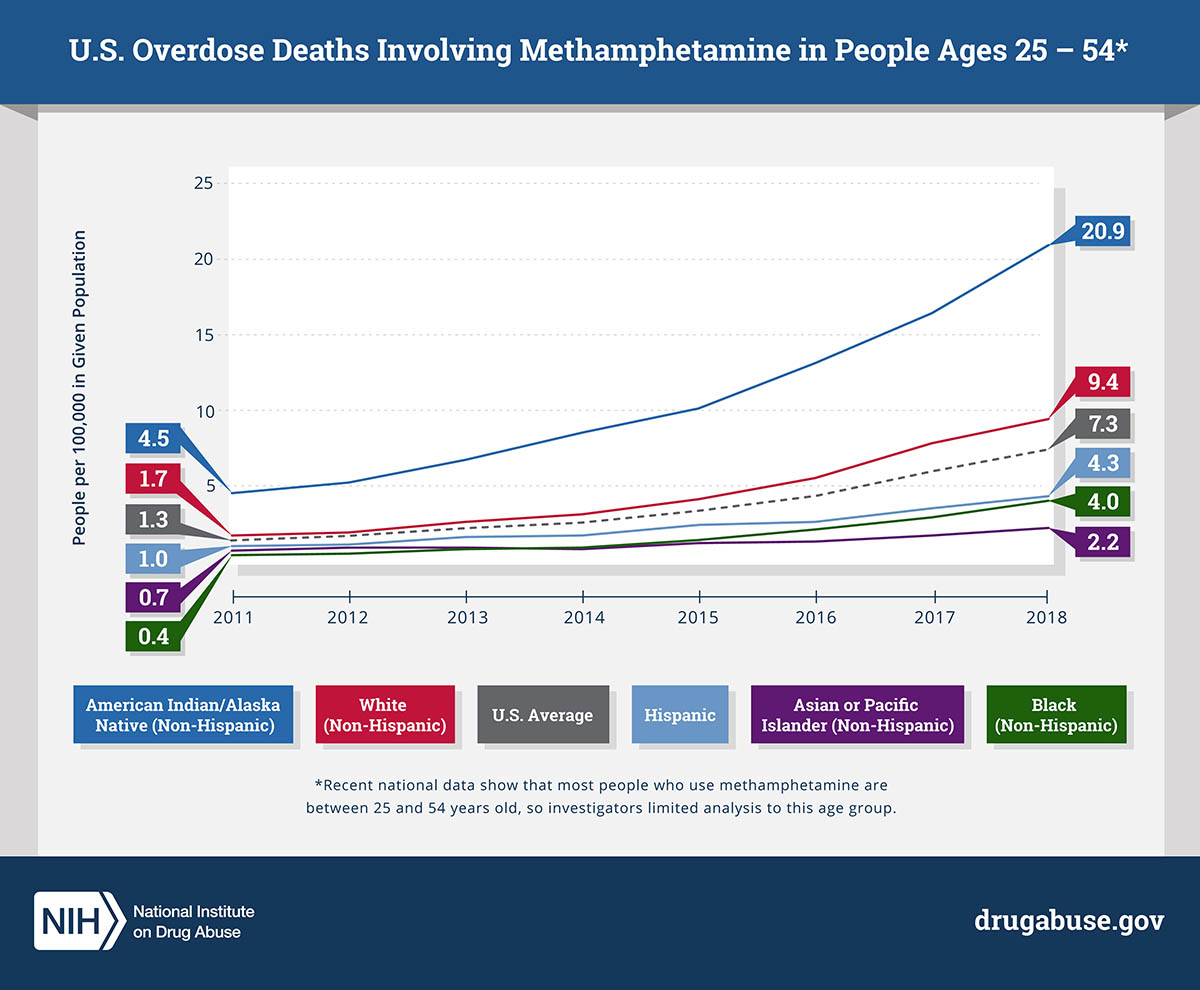 Methamphetamine overdose deaths surged in an eight-year period in the United States, according to a study that will published today in JAMA Psychiatry. The analysis revealed rapid rises across all racial and ethnic groups, but American Indians and Alaska Natives had the highest death rates overall. The research was conducted at the National Institute on Drug Abuse (NIDA), part of the National Institutes of Health.

Deaths involving methamphetamines more than quadrupled among non-Hispanic American Indians and Alaska Natives from 2011-2018 (from 4.5 to 20.9 per 100,000 people) overall, with sharp increases for both men (from 5.6 to 26.4 per 100,000 from 2011-2018) and women (from 3.6 to 15.6 per 100,000 from 2012-2018) in that group. The findings highlight the urgent need to develop culturally tailored, gender-specific prevention and treatment strategies for methamphetamine use disorder to meet the unique needs of those who are most vulnerable to the growing overdose crisis. Long-term decreased access to education, high rates of poverty and discrimination in the delivery of health services are among factors thought to contribute to health disparities for American Indians and Alaska Natives.

“While much attention is focused on the opioid crisis, a methamphetamine crisis has been quietly, but actively, gaining steam—particularly among American Indians and Alaska Natives, who are disproportionately affected by a number of health conditions,” said Nora D. Volkow, M.D., NIDA director and a senior author of the study. “American Indian and Alaska Native populations experience structural disadvantages but have cultural strengths that can be leveraged to prevent methamphetamine use and improve health outcomes for those living with addiction.”

Shared decision-making between patient and health care provider and a holistic approach to wellness are deeply rooted traditions among some American Indian and Alaska Native groups and exist in the Indian health care system. Traditional practices, such as talking circles, in which all members of a group can provide an uninterrupted perspective, and ceremonies, such as smudging, have been integrated into the health practices of many Tribal communities. Leveraging traditions may offer a unique and culturally resonant way to promote resilience to help prevent drug use among young people. Development and implementation of other culturally appropriate and community-based prevention; targeting youth and families with positive early intervention strategies; and provider and community education may also aid prevention efforts among this population.

NIDA investigators led by Beth Han, M.D., Ph.D., M.P.H., obtained data used in the analysis from the 2011-2018 Multiple Cause-of-Death records from the Centers for Disease Control and Prevention’s National Vital Statistics System, the nation’s most complete database of births and deaths.

Recent national data show that most people who use methamphetamine are between 25 and 54 years old, so the investigators limited their analysis to this age group. When they examined data from this population as a whole, they found a surge in overdose deaths. Deaths involving methamphetamines rose from 1.8 to 10.1 per 100,000 men, and from 0.8 to 4.5 per 100,000 women. This represents a more than five-fold increase from 2011 to 2018.

“Identifying populations that have a higher rate of methamphetamine overdose is a crucial step toward curbing the underlying methamphetamine crisis,” said Dr. Han. “By focusing on the unique needs of individuals and developing culturally tailored interventions, we can begin to move away from one-size-fits-all approaches and toward more effective, tailored interventions.”

About the National Institute on Drug Abuse (NIDA): The National Institute on Drug Abuse (NIDA) is a component of the National Institutes of Health, U.S. Department of Health and Human Services. NIDA supports most of the world’s research on the health aspects of drug use and addiction. The Institute carries out a large variety of programs to inform policy, improve practice, and advance addiction science. Fact sheets on the health effects of drugs and information on NIDA research and other activities can be found at www.drugabuse.gov, which is compatible with your smartphone, iPad or tablet. To order publications in English or Spanish, call NIDA’s DrugPubs research dissemination center at 1-877-NIDA-NIH or 240-645-0228 (TDD) or email requests to drugpubs@nida.nih.gov. Online ordering is available at drugpubs.drugabuse.gov. NIDA’s media guide can be found at www.drugabuse.gov/publications/media-guide/dear-journalist, and its easy-to-read website can be found at www.easyread.drugabuse.gov. You can follow NIDA on Twitter and Facebook.