More adults and children are using yoga and meditation

Nationwide survey reveals significant increases in use of mind and body approaches. 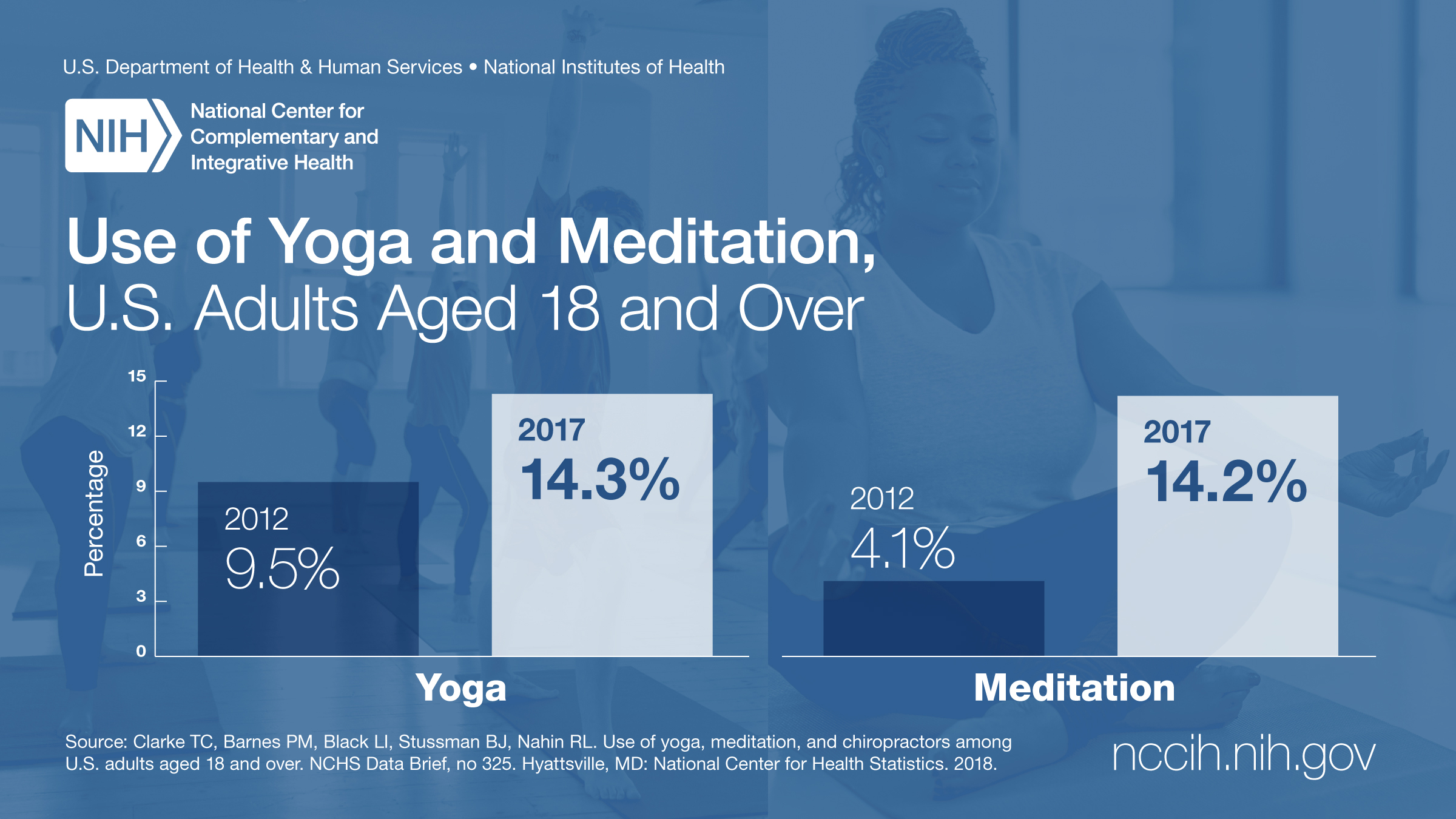 Over the past five years, more Americans of all ages are rolling out their yoga mats and meditating. A large nationally representative survey shows that the number of American adults and children using yoga and meditation has significantly increased over previous years and that use of chiropractic care has increased modestly for adults and held steady for children.

The complementary health questionnaire was developed by the National Center for Complementary and Integrative Health (NCCIH), part of the National Institutes of Health, and by the Centers for Disease Control and Prevention’s National Center for Health Statistics (NCHS). The complementary health questionnaire is administered every five years as part of the National Health Interview Survey (NHIS), an annual study in which thousands of Americans are interviewed about their health- and illness-related experiences. To identify trends in Americans’ use of specific practices, 2017 survey data were compared with a version of the survey fielded in 2012.

“The 2017 NHIS survey is the most current and reliable source of information on the use of specific complementary health approaches by U.S. adults and children. The survey data suggest that more people are turning to mind and body approaches than ever before, and the research we support at NCCIH is helping to determine the impact of those approaches on health,” said David Shurtleff, Ph.D., Acting Director of NCCIH.

Information on the use of complementary health approaches was collected from a sample of adults aged 18 and over who answered the 2012 (n=34,525) and 2017 (n=26,742) NHIS adult alternative medicine or complementary health questionnaires, respectively, and from respondents of sample children aged 4-17 as part of the Child Alternative Medicine (2012) or Child Complementary Health (2017) supplements of NHIS. The percentage of adults who saw a chiropractor in the past 12 months was obtained from the Adult Access to Health Care and Utilization (AAU) section of the sample adult core questionnaire for both years.

The 2017 survey is the fourth conducted by NCCIH and NCHS—previous surveys occurred as part of the 2012, 2007, and 2002 NHIS. Previous surveys were broader and included substantially more questions while the 2017 survey focused on the use complementary practices not included in other large national surveys, such as massage, yoga, and chiropractic.

Read more about the survey and access downloadable graphics: https://nccih.nih.gov/research/statistics/NHIS/2017.

About the National Center for Complementary and Integrative Health (NCCIH): NCCIH’s mission is to define, through rigorous scientific investigation, the usefulness and safety of complementary and integrative health approaches and their roles in improving health and health care. For additional information, call NCCIH’s Clearinghouse toll free at 1-888-644-6226. Follow us on Twitter, Facebook, and YouTube.