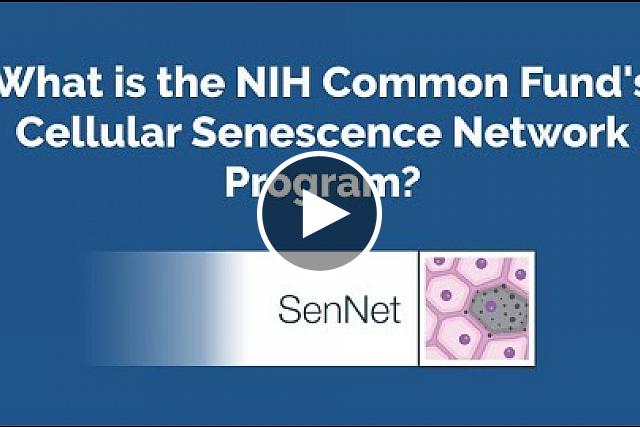 The National Institutes of Health has launched a program to study a rare type of cells, called “senescent” cells, that play both positive and negative roles in biological processes. The NIH Common Fund’s Cellular Senescence Network (SenNet) program will leverage recent advances in studying individual cells, or single-cell analysis, to comprehensively identify and characterize the differences in senescent cells across the body, across various states of human health, and across the lifespan. The rarity and diversity of these cells previously made them difficult to identify and study; therefore, a deeper understanding will help researchers develop therapies that encourage beneficial effects of senescent cells while suppressing their tissue-damaging effects.

“The number of senescent cells in a person’s body increases with age, which may reflect both an increase in the generation of these cells and a decreased ability of the aging immune system to regulate or eliminate these cells. This age-related accumulation of senescent cells leads to production of inflammatory molecules and corruption of healthy cells,” said Richard J. Hodes, M.D., director of the National Institute on Aging, part of NIH. “This can affect a person’s ability to withstand stress or illness, recuperate from injuries, and maintain normal brain function. The aim of NIH’s strengthened focus on this field of science is to one day conquer these and other challenges.”

A cell dividing into two cells is a hallmark of human development. Over time, our bodies accumulate a small number of cells that no longer divide. These “senescent” cells can play important roles in health, either directly or through the release of molecules that affect neighboring cells. Senescent cells can play positive roles, such as aiding wound repair or preventing tumor growth in some cancers. However, they can also contribute to chronic diseases of aging such as cardiovascular disease and neurodegeneration. For this reason, therapeutics called “senolytics” are being developed to target senescent cells and remove them from the body.

“The study of senescent cells holds great promise in helping to assess the role of these cells in the development of age-related disease, including cancer,” said Norman E. “Ned” Sharpless, M.D., director of NIH’s National Cancer Institute. “Cancer is certainly one of the most prevalent chronic age-related diseases. We look forward to the potential translational benefits of this research in answering some of the most challenging questions about aging and cancer. This initiative will advance our work in the cancer research field overall.”

NIH is funding $125 million to 16 grants over five years, pending available funds. NIH issued eight awards for the creation of SenNet Tissue Mapping Centers, seven awards for Technology Development and Application Projects, and one award for a Consortium Organization and Data Coordinating Center (CODCC). The Tissue Mapping Centers will identify biomarkers of senescent cells in humans and then construct high-resolution, detailed maps of cellular senescence across the lifespan and physiological states. The Technology Development and Application Projects will be critical in advancing promising tools, techniques, and methods for SenNet to study senescent cells. As the organizational hub, the CODCC will collect, store, and curate the Network’s data, tools, and models. These projects will work together to create a publicly accessible and searchable Atlas of Cellular Senescence. The SenNet program accelerates the ability of biomedical researchers to develop therapeutics that target cellular senescence and improve human health by providing data and resources that would be difficult to achieve through individual efforts.

While the central goal of the SenNet program is to map senescent cells in humans, studies in mice would enable researchers to ask questions about environmental factors, preventative strategies, and pre-clinical issues related to senescence. To identify differences and similarities in senescence between mice and humans, the SenNet program plans to incorporate cellular senescence mapping efforts in mice in the future. The program also plans to further expand its technology development initiative to aid the tissue mapping efforts.

“The trans-NIH approach of the SenNet program will provide tools and technologies capable of studying senescent cells in all their biological roles,” said James M. Anderson, M.D., Ph.D., director of the Division of Program Coordination, Planning, and Strategic Initiatives, which oversees the Common Fund. “SenNet researchers will capitalize on recent advances in single-cell analysis, including those from the Common Fund’s Human Biomolecular Atlas Program and Single Cell Analysis Program, to create this foundational resource for the broader biomedical research community.”

The SenNet program is a trans-NIH effort managed collaboratively by staff from the NIH Common Fund, the National Institute on Aging, and the National Cancer Institute.

To learn more about cellular senescence and the outstanding research questions around it, read this Featured Research article from the National Institute on Aging.

About the NIH Common Fund: The NIH Common Fund encourages collaboration and supports a series of exceptionally high-impact, trans-NIH programs. Common Fund programs are managed by the Office of Strategic Coordination in the Division of Program Coordination, Planning, and Strategic Initiatives in the NIH Office of the Director in partnership with the NIH Institutes, Centers, and Offices. More information is available at the Common Fund website: https://commonfund.nih.gov.