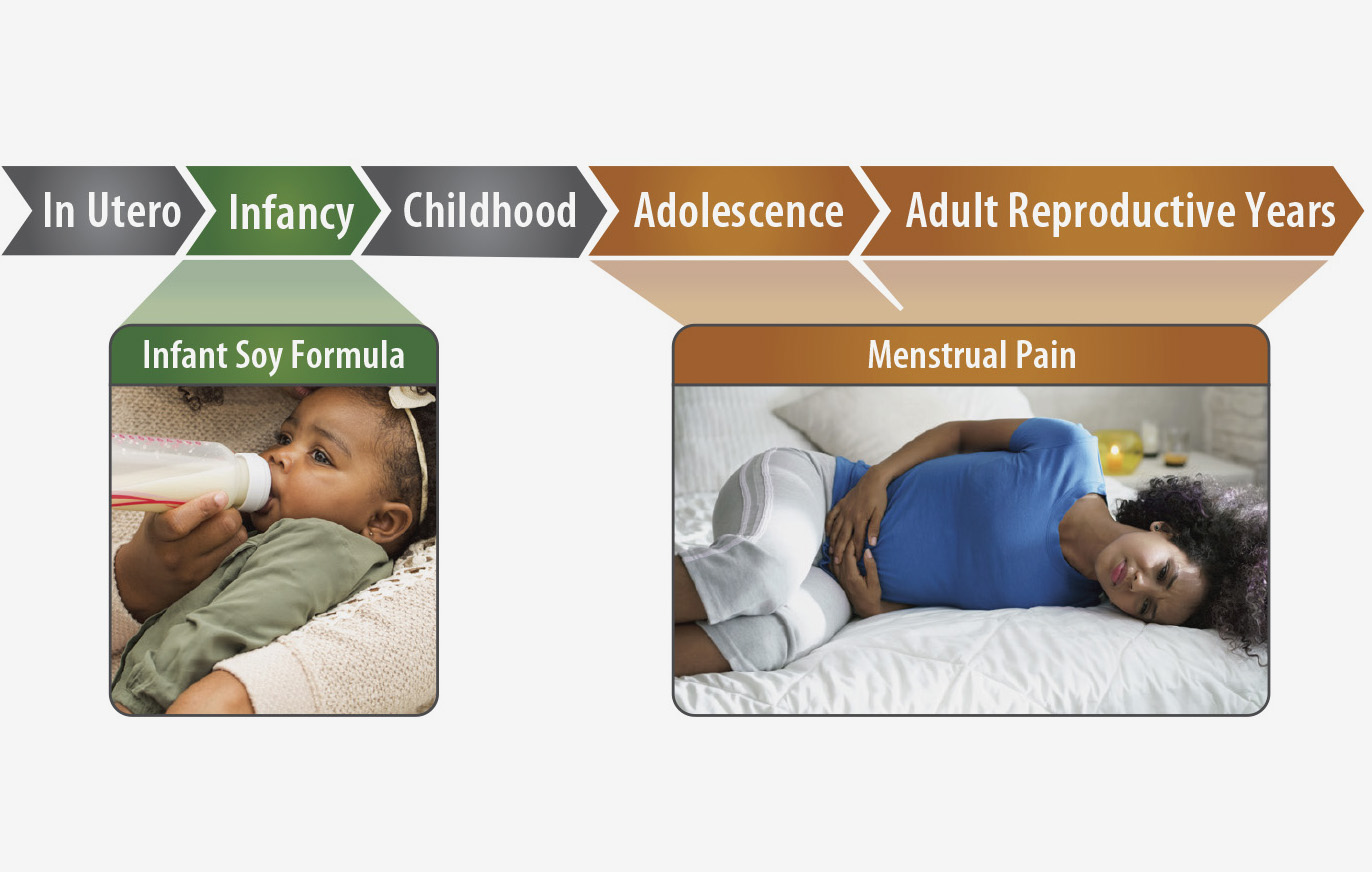 New research suggests that infant girls fed soy formula are more likely to develop severe menstrual pain as young adults. The finding adds to the growing body of literature that suggests exposure to soy formula during early life may have detrimental effects on the reproductive system. The study appears online in the journal Human Reproduction.

Scientists at the National Institute of Environmental Health Sciences (NIEHS), part of the National Institutes of Health, along with collaborators from Vanderbilt University Medical Center in Nashville, Tennessee, and the Henry Ford Health System in Detroit, examined data from 1,553 African-American women, aged 23-35, participating in the NIEHS Study of Environment, Lifestyle, and Fibroids (SELF).

NIEHS postdoctoral researcher and lead author Kristen Upson, Ph.D., offered a potential explanation for the association between soy formula and severe menstrual pain. She said that data from previous laboratory animal studies suggest that early-life exposure to genistein, a naturally occurring component in soy formula, interferes with the development of the reproductive system, including factors involved in menstrual pain. She said these studies have also shown that developmental changes can continue into adulthood.

However, severe menstrual pain is not the only adverse reproductive health condition that Upson has linked to infant soy formula. She and her collaborators at the Fred Hutchinson Cancer Research Center in Seattle previously linked soy formula feeding to endometriosis, a condition where tissue that normally lines the inside of the uterus grows outside. Using SELF data, Upson and NIEHS senior scientist Donna Baird, Ph.D., have also linked infant soy formula to larger fibroids among woman with fibroids and to heavy menstrual bleeding.

Other studies by NIEHS scientists found that girl infants fed soy formula had changes in the cells of the vagina, including differences in how specific genes are turned on and off.

The only other research that evaluated soy formula in relation to menstrual pain was published in 2001 by scientists at the University of Pennsylvania, Philadelphia, and the University of Iowa, Iowa City. The study, which primarily included white young adults who participated in feeding studies when they were infants, also found an association between soy formula feeding and severe menstrual pain in the women.

"The results of both studies indicate that the findings may apply to all women, but further research is warranted before any changes are made to soy formula feeding recommendations," said Baird.

The American Academy of Pediatrics (AAP) promotes human milk as the ideal source of nutrition for infants. It does not recommend soy formula for babies born prematurely. For full term infants, the AAP recommends soy formula in rare cases where the child’s body cannot break down the sugars in milk or if the family prefers a vegetarian diet.

Upson said some estimates put the prevalence of menstrual pain in women of reproductive age at 60 percent. She added that menstrual pain can have a substantial impact on the quality of life, affecting school performance, work productivity, and relationships.

"Given how common menstrual pain is and the impact it can have on women’s lives, the next steps in research should examine exposures, even those that occur earlier in life that may increase a women’s risk of experiencing menstrual pain," said Upson.