Launched in 2014, the Accelerating Medicines Partnership® (AMP®) program is a public-private partnership between the National Institutes of Health (NIH), the U.S. Food and Drug Administration (FDA), multiple biopharmaceutical and life science companies, non-profit and other organizations  to transform the current model for developing new diagnostics and treatments. Current AMP projects include:

AMP partners share a common goal of increasing the number of new diagnostics and therapies for patients and reduce the time and cost of developing them. The AMP program aims to improve understanding of therapeutically relevant biological pathways and validate information that could be relevant for the development of multiple therapeutics.

Through this cross-sector partnership, managed through the Foundation for the NIH (FNIH), NIH and AMP partners are sharing expertise and resources — over $650 million to date, which includes in kind contributions — in an integrated governance structure that enables the best-informed contributions to science from all participants. 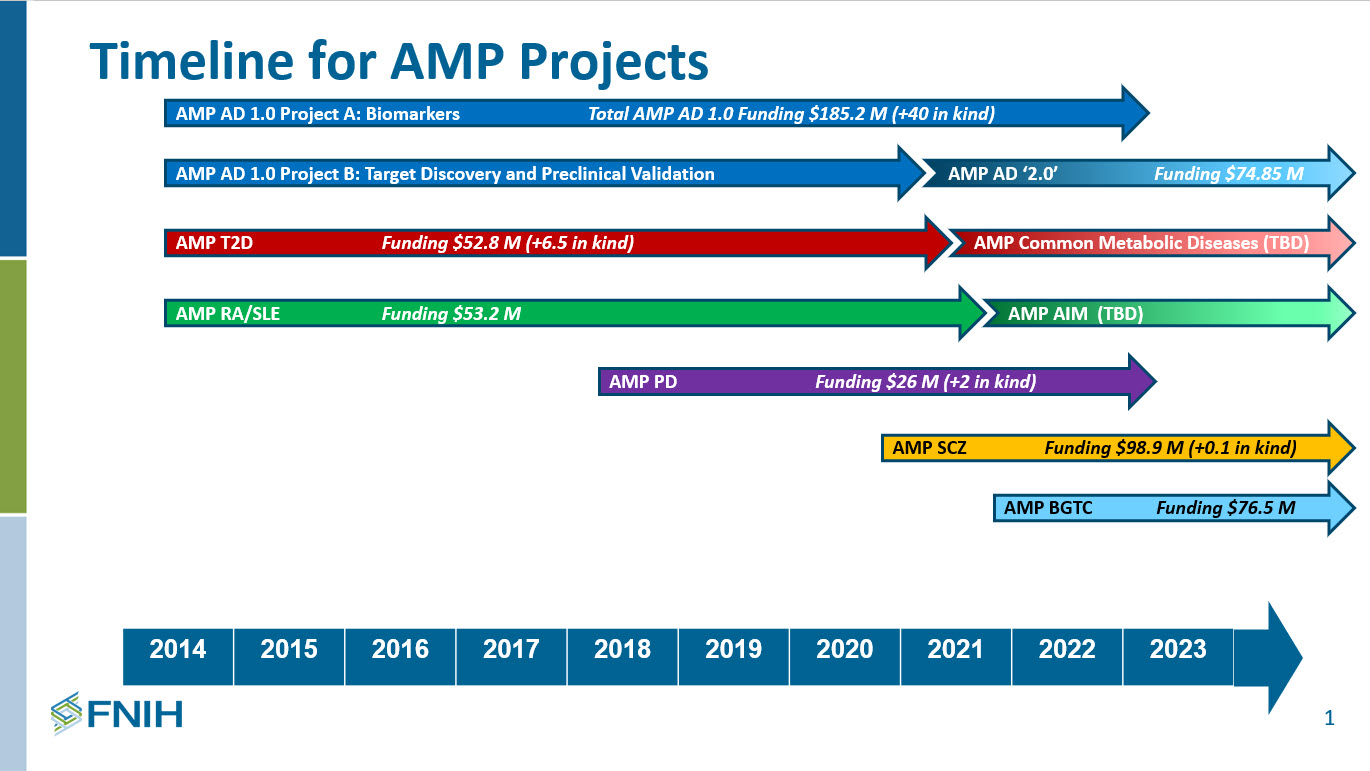 As a result of technological revolutions in genomics, proteomics, imaging, and more, researchers have been able to identify changes in genes, proteins, and other molecules that cause disease and influence disease progression. Clinicians use this information to determine the presence of disease through biomarkers with the use of diagnostic tests. Biopharmaceutical companies use it to develop therapies that target these specific genes and molecules to interfere with their processes and modify the course of disease.

While technological advances have produced a wealth of data on the biological cause of disease, moving these discoveries into treatments has been far more difficult. For some diseases, the challenge is identifying which biological insights will lead to effective drug targets, when choosing the wrong target can result in failures late in the drug development process, costing time, money, and ultimately, lives. For other diseases — such as very rare diseases — designing a treatment like a gene therapy that is capable of modifying the course of a disease is straightforward, but moving that potential treatment from laboratory testing to human trials is prohibitively difficult. Developing a new drug — from early discovery through Food and Drug Administration (FDA) approval — takes well over a decade and has a failure rate of more than 95 percent. Consequently, each success costs more than $1 billion. The most expensive failures happen in late phase clinical trials, with a lack of drug efficacy currently estimated as responsible for 59 percent of Phase II failures and 52 percent of Phase III failures.1 Therefore, it’s essential to do a better job of pinpointing the right biological targets early in the process.

The entire biomedical research community and the public have a shared interest in compressing the timelines, reducing the costs, and increasing the success rates of new targeted therapies. Given the amount and complexity of the data, this goal will require a systematic approach in which government, academia, industry, and patient groups work collaboratively.

By optimizing the process for identifying and validating clinically relevant disease targets for drug design, AMP aims to:

Increase the number and effectiveness of new targeted therapies:

Steering committees for each of the projects, with representation from the partners participating in those projects, meet regularly to review ongoing progress and milestones. The steering committees are managed by FNIH under the direction of an AMP Executive Committee comprised of representatives from NIH, participating industry leaders, FDA, European Medicines Agency, and non-profit and other organizations.

February 2014 Statement by the President

Foundation for the National Institutes of Health AMP Website