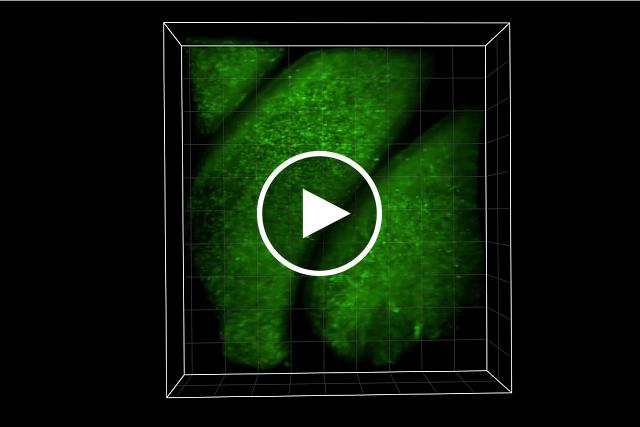 When you smell an odor, you’re actually breathing in tiny molecules. These molecules stimulate specialized nerve cells, called olfactory sensory neurons, high inside the nose. There are a few million of these cells inside your nose. Each makes one of about 500 different types of odor receptor, enabling it to selectively capture a specific set of odor molecules.

But how more complex odors made of several different odor molecules create the perception of a unique smell isn’t known. Some odors can even mask the scent of others. Whether these interactions happen in the nose or involve how the brain interprets the combination of smells hasn’t been clear.

To study how information about complex odors is encoded, a team led by Drs. Elizabeth Hillman and Stuart Firestein at Columbia University imaged olfactory sensory neurons in mouse nose tissue as it was exposed to different odor blends. The work was funded in part by NIH’s National Institute on Deafness and Other Communication Disorders (NIDCD) and Brain Research through Advancing Innovative Technologies (BRAIN) Initiative. Results were published on April 10, 2020, in Science.

The researchers measured thousands of cell responses simultaneously using a cutting-edge, ultra-fast 3D imaging technique called SCAPE microscopy. A fluorescent compound in the neurons allowed them to visualize which cells were activated by different odors. They exposed the tissues to combinations of different odors, including “almond,” “floral/jasmine,” and “citrus.”

When used alone, the odors showed simple cell coding patterns similar to those found in previous studies. But when two or three odors were mixed together, a more complex system of nerve cell responses appeared.

The scientists found that one odor could alter a cell’s response to another odor, even if the first odor didn’t trigger a response in that cell when delivered alone. Such interactions affected the strength of the neuron’s response, either enhancing or suppressing the effect of the neuron’s preferred odor. As a result, the code sent to the brain for a mixture of odors was different than what would be predicted from the sum of each odor’s normal nerve cell signal response.

“Our results showed that scent molecules can mask other scents, not by overpowering them, but by changing the way cells respond to them,” Hillman says.

“From garbage to cologne, the scents we encounter every day are comprised of hundreds or even thousands of individual odors,” Firestein explains. “Your morning cup of coffee can contain more than 800 different types of odor molecules. Although much work has been done to understand how the nose and brain work together to identify individual odors, scientists have long struggled to explain how this system works when multiple odors are mixed together.”

The findings provide new insight into how the brain decodes information to produce sensations and perceptions. They may also lead to a better understanding of why certain neurological disorders and disease—such as Alzheimer’s disease, Parkinson’s disease, and viruses like flu and COVID-19—can cause a loss of smell.