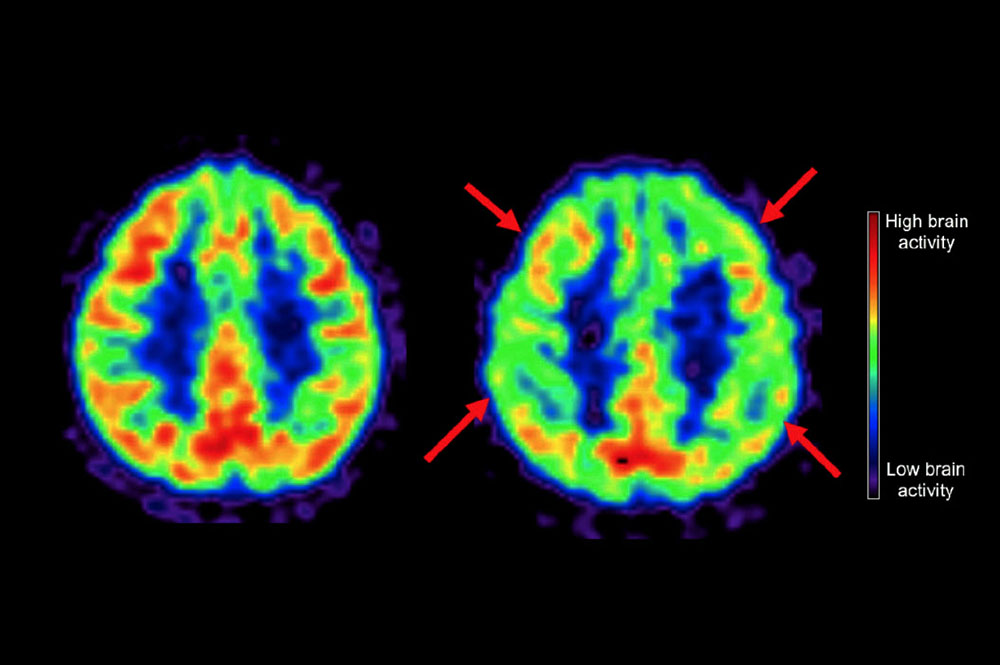 PET scans show the higher brain activity of a 50-year-old woman on a Mediterranean-style diet (left, image shows more red, which indicates higher activity) and a 50-year-old on a Western diet most of her life (right, image shows much less red). Arrows point to areas that are typically affected by Alzheimer’s disease, with lower activity for Western diet. Weill Cornell Medicine

Alzheimer’s disease is the most common type of dementia that occurs with aging. Experts estimate that more than 5 million Americans are currently living with the disease. But scientists know little about what lifestyle factors might protect people against developing Alzheimer’s disease. They do know that brain changes associated with the disease can occur decades before symptoms are seen.

In previous work, a research team led by Dr. Lisa Mosconi from Weill Cornell Medicine found differences in brain imaging scans between people who reported eating a Mediterranean diet and those who ate a standard Western diet. A Mediterranean diet is high in foods such as fruits, vegetables, and lean protein. In contrast, a standard Western diet contains an excess of red meat, saturated fats, and refined sugar. The differences that the research team found may signal early Alzheimer’s disease.

In a new study, Mosconi and her colleagues measured changes in brains over time. They performed baseline brain imaging in 34 people who ate a Mediterranean diet and 36 people who ate a Western diet. The volunteers ranged in age from 30 to 60 and showed no symptoms of dementia when the study began. The researchers then repeated the scans at least two years later. The study was supported by NIH’s National Institute on Aging (NIA). Results were published online in Neurology on April 13, 2018.

In the follow-up scans, people in the Western diet group showed even greater beta-amyloid deposits and reductions in energy use than the Mediterranean diet group. Factors such as age, sex, and a gene linked to Alzheimer’s risk didn’t account for the differences.

“We’re seeing these changes only in parts of the brain specifically affected by Alzheimer’s, and in relatively young adults,” Mosconi says. “It all points to the way we eat putting us at risk for Alzheimer’s down the line. If your diet isn’t balanced, you really need to make an effort to fix it, if not for your body, then for your brain.”

The researchers estimate that there may be as much as a three-and-a-half-year delay in progression of Alzheimer’s disease in people who have eaten a Mediterranean diet for many years, rather than a standard Western diet. Research that involves larger and more diverse groups of people over longer periods of time is needed to confirm these findings. More work is also needed to understand exactly how a Mediterranean diet may protect people from harmful brain changes.