Earlier detection could potentially reduce deaths from many types of cancer. Martynasfoto/iStock/Thinkstock

For many types of cancer, the earlier the cancer is detected, the more successful treatment is likely to be. That’s why doctors suggest cancer screening tests such as mammograms to detect breast cancer and colonoscopy to find colorectal cancer. Screening tests can detect cancer before any symptoms develop.

Researchers have been working to develop tests that can detect bits of tumor material in bodily fluids such as blood or urine. These tests, sometimes referred to as liquid biopsies, could potentially be used to catch cancers much earlier, long before symptoms appear.

A research team based at Johns Hopkins University set out to develop a blood test that could detect several types of cancer and pinpoint their source. They focused on eight cancer types: breast, colorectal, esophagus, liver, lung, ovary, pancreas, and stomach. These cancers are common in Western populations, and there are no blood-based tests for their early detection in common clinical use. The study was funded in part by NIH’s National Cancer Institute (NCI) and National Institute of General Medical Sciences (NIGMS). Results appeared online on January 18, 2018, in Science.

The team evaluated known biomarkers for their ability to help detect signs of solid tumors in the blood before they spread to other parts of the body. They searched for the most effective combination of known mutations to identify cancers using circulating tumor DNA (ctDNA)—pieces of DNA in the bloodstream that have been released from cancer cells. They also assessed protein biomarkers, since many early-stage tumors don’t release detectable amounts of ctDNA.

The test, called CancerSEEK, evaluates the presence of 2,001 genetic mutations and levels of eight proteins. The researchers tested CancerSEEK in 1,005 patients who had been diagnosed with cancer but whose cancers hadn’t yet spread at the time of enrollment. They tested 812 healthy controls for comparison. 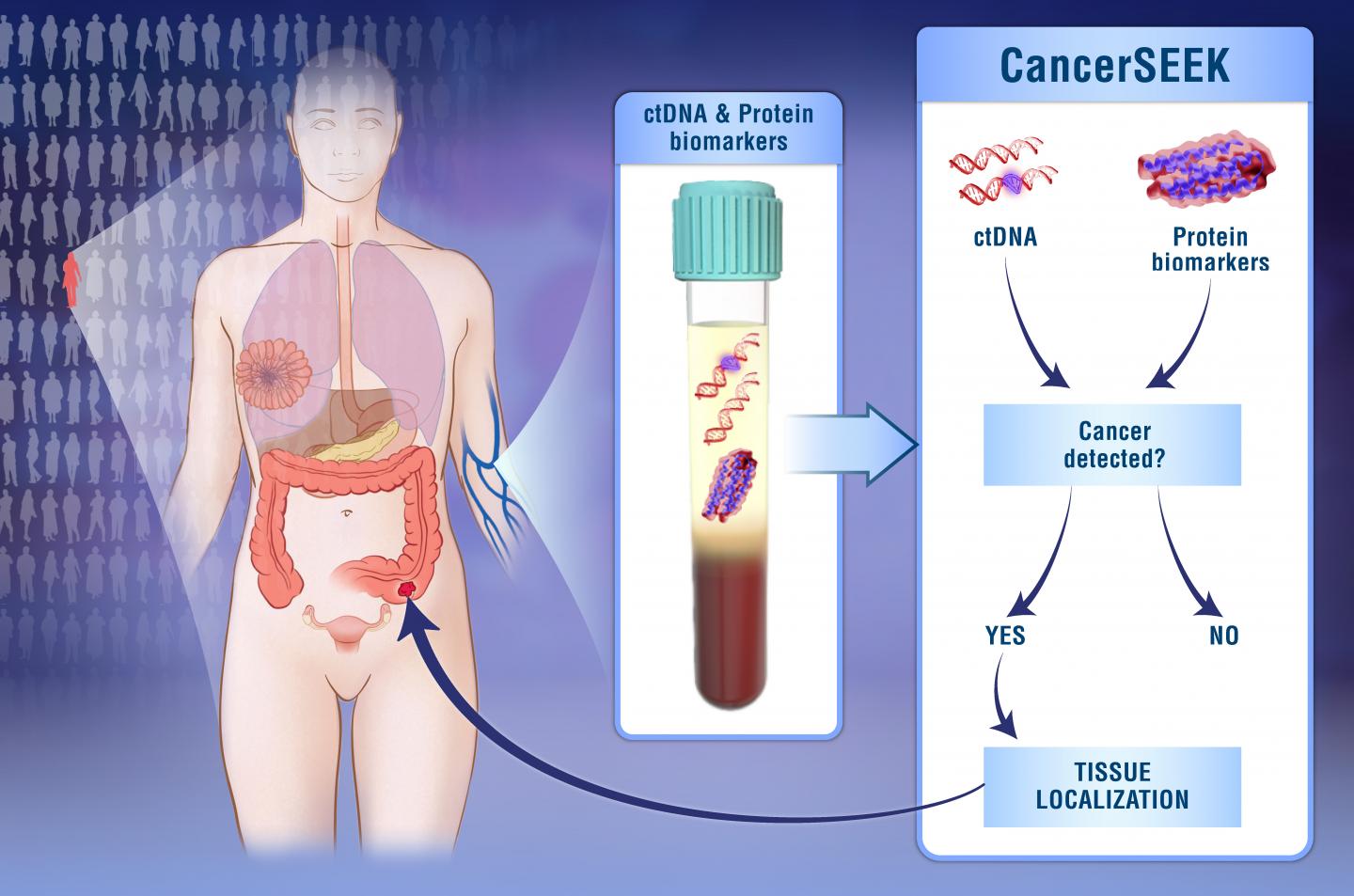 The scientists used machine learning to predict the underlying cancer type in the 626 cancer patients who had positive CancerSEEK tests. They were able to narrow the source of the cancer to two organs in 83% of the patients and to a single organ in 63%.

“This test represents the next step in changing the focus of cancer research from late-stage disease to early disease, which I believe will be critical to reducing cancer deaths in the long term,” says co-lead researcher Dr. Bert Vogelstein.

“The use of a combination of selected biomarkers for early detection has the potential to change the way we screen for cancer, and it is based on the same rationale for using combinations of drugs to treat cancers,” says senior author Dr. Nickolas Papadopoulos.

The scientists estimate that the test will cost less than $500. The eight cancer types studied account for more than half of cancer deaths nationwide, and current screening tests with proven benefit are limited to only a few types of cancer. Earlier detection could potentially reduce deaths from these diseases. However, there were several limitations to this study. Further testing will be needed to measure the accuracy and predictive value of CancerSEEK in a clinical setting.