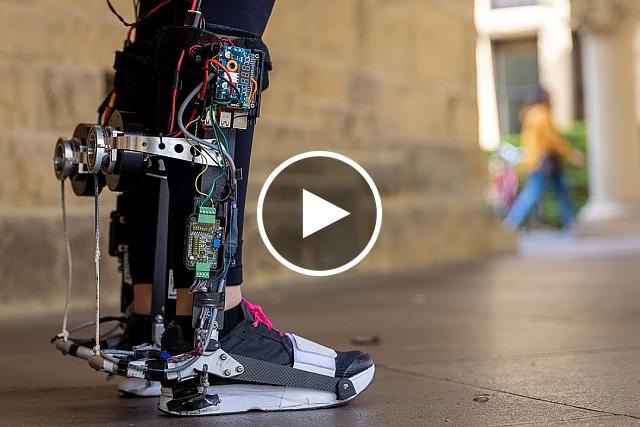 Researchers developed an exoskeleton that can assist with walking. Kurt Hickman

Millions of people have conditions that make walking difficult. Millions more regularly perform strenuous movement as part of their jobs. Wearable robotic devices called exoskeletons that help the legs move could benefit both of these groups. In laboratory settings, such devices have helped people to walk faster while using less energy. But various obstacles have kept these devices from being practical for everyday use.

To get the best improvement in walking performance, an exoskeleton has to adapt to an individual user’s needs. Doing so usually requires extensive data about the user’s movement and metabolic rate. Collecting this data takes expensive lab equipment and hours of walking on a treadmill. This would be costly and impractical to do for a consumer medical device.

An NIH-funded research team at Stanford University led by Dr. Steven Collins has developed an exoskeleton that can rapidly adapt to the user during normal walking. The work was described in Nature on October 12, 2022.

First, the researchers developed a model for estimating relative metabolic rates from movement data. This allowed the exoskeleton to get all the data it needed during walking from wearable sensors, avoiding the need to collect data in a lab. The researchers based their model on extensive movement and metabolic data collected in a previous experiment while people walked in various conditions.

The team tested how well an exoskeleton based on their model could adapt to a user. They then compared it to one based on lab measurements. Both methods wound up applying similar forces at different speeds and reduced effort similarly across a range of conditions. But the model-based adaptation took only one-quarter as long as the measurement-based adaptation.

Next, the researchers created a portable, ankle-worn exoskeleton that could be used in the real world. The exoskeleton was powered by a battery pack worn at the waist. With each step, a motor provided torque at the ankle, helping the user to push off.

The team conducted tests of the device outdoors on public sidewalks. For one hour, the participants walked a prescribed course while wearing the exoskeleton. They walked the course in short bouts with different speeds to mimic typical real-world walking patterns.

“This exoskeleton personalizes assistance as people walk normally through the real world,” Collins says. “And it resulted in exceptional improvements in walking speed and energy economy.”

“This opens the door to a much broader use of exoskeletons to assist individuals with physical impairments and people like fire fighters, who need to carry heavy loads,” adds co-author Dr. Scott Delp.