The Tree of Hippocrates

History of the Tree of Hippocrates on the NIH Campus

The original Tree of Hippocrates sapling, planted on the NIH campus in 1962.

Hippocrates, regarded as the father of modern medicine, was born on the Greek island of Cos around 460 B.C. E. According to legend, he taught medical students in the shade of an Oriental plane tree, or Platanus orientalis. The species Platanus is commonly known as Sycamore.

Thousands of years later, the “Tree of Hippocrates” became rooted in the history of the National Institutes of Health. In 1961, Greek Ambassador Alexis Liatis presented the National Library of Medicine with a cutting from the celebrated tree to mark the dedication of the library’s new building on the NIH campus.

The progeny was planted near the library in the spring of 1962, as a living representation of Hippocrates teachings on the art of medicine--and the science, knowledge and ethics it entails. The tree grew and thrived. But in the 1980s, its health declined because of a fungal disease common to sycamores.  The tree that symbolized scientific inquiry became the subject of it. NIH landscape architect Lynn Mueller spent decades trying to restore the tree’s health while simultaneously exploring a clone. Eventually, he connected with the non-profit Champion Tree Project, now known as the Archangel Ancient Tree Archive, which successfully cloned the historic tree. A clone will be planted at the library, to replace the ailing tree that was felled in 2013. A second clone will be planted near the NIH Clinical Research Center.

1959 postage stamp with the Tree of Hippocrates in Cos, Greece.

Wherever the art of medicine is loved, there is also a love of humanity. 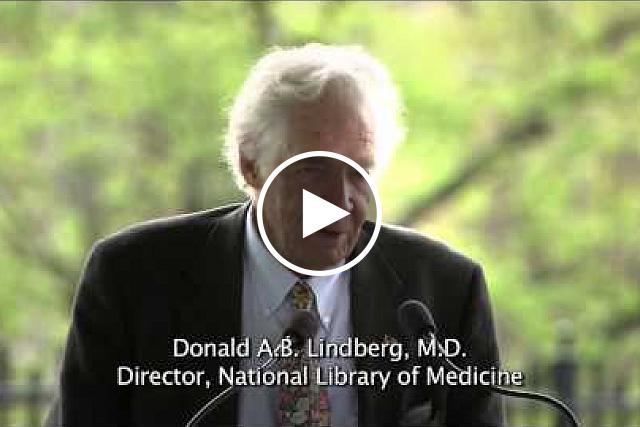 Joined by His Excellency Christos P. Panagopoulos, Ambassador of Greece to the United States.