Home » About NIH » Who We Are » The NIH Director 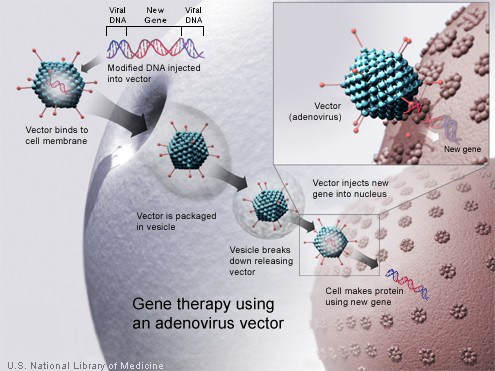 In this expandable image, a new gene is injected into an adenovirus vector, which is used to introduce the modified DNA into a human cell. If the treatment is successful, the new gene will make a functional protein.NIH U.S. National Library of Medicine.

In August 2018, the National Institutes of Health and the Food and Drug Administration (FDA) announced a joint proposal to streamline duplicative and burdensome oversight over gene therapy. As part of this effort and following public input, NIH today released the amended NIH Guidelines for Research Involving Recombinant or Synthetic Nucleic Acid Molecules. The amendments remove the requirement to register and report on human gene therapy protocols under the NIH Guidelines to the NIH.  Robust oversight continues under the FDA, which has regulatory oversight of all human gene therapy clinical trials. In addition, NIH-funded human gene therapy research remains subject to the usual NIH oversight that applies to all NIH-funded research, and oversight by local authorities such as Institutional Review Boards and Institutional Biosafety Committees.

Because of the changing landscape, NIH is refocusing the NIH Recombinant DNA Advisory Committee (RAC) into a role closer to its original mandate, which was to follow and provide advice on safety and ethical issues associated with emerging biotechnologies. Today, these emerging areas of research include, but are not restricted to, technologies surrounding advances in recombinant or synthetic nucleic acid research. Accordingly, the Committee has been renamed the Novel and Exceptional Technology and Research Advisory Committee (NExTRAC) to reflect this broader outlook.  I look forward to working with the NExTRAC to evaluate new biotechnologies and emerging applications that represent both great scientific opportunities and significant ethical and safety challenges. The advice NIH receives from the NExTRAC will be essential to the agency in appropriate stewardship of its investment in cutting-edge science and the revised Committee will hold its first meeting in late 2019.

I would also like to take a moment to express my deep appreciation for the role the RAC played in the advancement of recombinant DNA technology and gene therapy, and the multitude of members who have served on this Committee throughout the decades.  The steady and guiding hand of the RAC helped the field through some of its most challenging years.  Without their expertise provided over the years, the field of gene therapy would not have advanced to where it is now.