Home » About NIH » Who We Are » The NIH Director

Statement on the Passing of Congressman Louis Stokes

Congressman Stokes at a March 2013 ceremony to unveil his portrait in the Louis Stokes Laboratories, with (from left to right) Dr. John Ruffin, former director of the National Institute on Minority Health and Health Disparities, NIH Director Dr. Francis Collins, and Dr. Maria Freire, President and Executive Director, Foundation for the National Institutes of Health. NIH 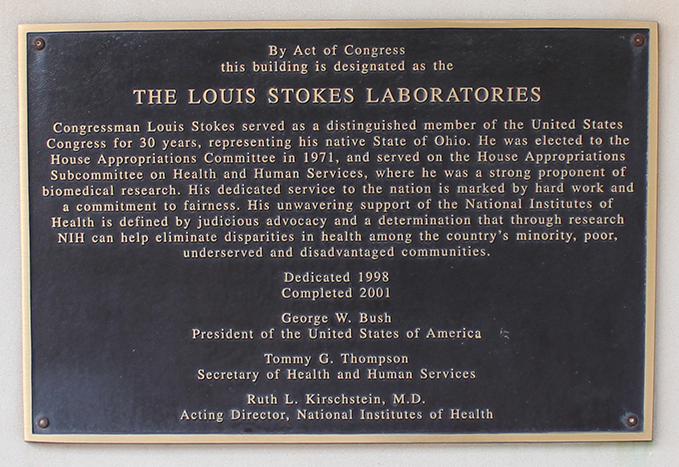 Building 50 on the NIH campus in Bethesda, Md., was dedicated in June 2001 as the Louis Stokes Laboratories.NIH

I am deeply saddened by the news of the death of former Congressman Louis Stokes. He leaves a legacy of compassionate and effective leadership that few can match. Throughout his 30-year career as a representative from Ohio, he was a persistent and emphatic champion of extending the benefits of biomedical research to all people, especially in the area of health disparities.

In June 2001, NIH dedicated Building 50 as the Louis Stokes Laboratories. In March 2013, we were honored to have Congressman Stokes attend a ceremony to unveil his portrait, which hangs in the lobby. My own laboratory is on the fifth floor of this building, and I am reminded of his legacy every time I go over to the lab.

I extend my sincere condolences to Congressman Stokes’ entire family.