For the first time in 27 years, clinical diagnostic criteria for Alzheimer's disease dementia have been revised, and research guidelines for earlier stages of the disease have been characterized to reflect a deeper understanding of the disorder. The National Institute on Aging/Alzheimer's Association Diagnostic Guidelines for Alzheimer's Disease outline some new approaches for clinicians and provides scientists with more advanced guidelines for moving forward with research on diagnosis and treatments. They mark a major change in how experts think about and study Alzheimer's disease. Development of the new guidelines was led by the National Institutes of Health and the Alzheimer’s Association.

The original criteria were the first to address the disease and described only later stages, when symptoms of dementia are already evident. The updated guidelines announced today cover the full spectrum of the disease as it gradually changes over many years. They describe the earliest preclinical stages of the disease, mild cognitive impairment, and dementia due to Alzheimer's pathology. Importantly, the guidelines now address the use of imaging and biomarkers in blood and spinal fluid that may help determine whether changes in the brain and those in body fluids are due to Alzheimer's disease. Biomarkers are increasingly employed in the research setting to detect onset of the disease and to track progression, but cannot yet be used routinely in clinical diagnosis without further testing and validation.

"Alzheimer's research has greatly evolved over the past quarter of a century. Bringing the diagnostic guidelines up to speed with those advances is both a necessary and rewarding effort that will benefit patients and accelerate the pace of research," said National Institute on Aging Director Richard J. Hodes, M.D.

"We believe that the publication of these articles is a major milestone for the field," said William Thies, Ph.D., chief medical and scientific officer at the Alzheimer's Association. "Our vision is that this process will result in improved diagnosis and treatment of Alzheimer’s, and will drive research that ultimately will enable us to detect and treat the disease earlier and more effectively. This would allow more people to live full, rich lives without — or with a minimum of — Alzheimer’s symptoms."

The original 1984 clinical criteria for Alzheimer's disease, reflecting the limited knowledge of the day, defined Alzheimer’s as having a single stage, dementia, and based diagnosis solely on clinical symptoms. It assumed that people free of dementia symptoms were disease-free. Diagnosis was confirmed only at autopsy, when the hallmarks of the disease, abnormal amounts of amyloid proteins forming plaques and tau proteins forming tangles, were found in the brain.

Since then, research has determined that Alzheimer's may cause changes in the brain a decade or more before symptoms appear and that symptoms do not always directly relate to abnormal changes in the brain caused by Alzheimer's. For example, some older people are found to have abnormal levels of amyloid plaques in the brain at autopsy yet never showed signs of dementia during life. It also appears that amyloid deposits begin early in the disease process but that tangle formation and loss of neurons occur later and may accelerate just before clinical symptoms appear.

To reflect what has been learned, the National Institute on Aging/Alzheimer's Association Diagnostic Guidelines for Alzheimer’s Disease cover three distinct stages of Alzheimer's disease:

The panels purposefully left the guidelines flexible to allow for changes that could come from emerging technologies and advances in understanding of biomarkers and the disease process itself.

"The guidelines discuss biomarkers currently known, and mention others that may have future applications," said Creighton H. Phelps, Ph.D., of the NIA Alzheimer's Disease Centers Program. "With researchers worldwide striving to develop, validate and standardize the application of biomarkers at every stage of Alzheimer’s disease, we devised a framework flexible enough to incorporate new findings."

The Alzheimer's Association is the world's leading voluntary health organization in Alzheimer's care, support and research. Their mission is to eliminate Alzheimer’s disease through the advancement of research; to provide and enhance care and support for all affected; and to reduce the risk of dementia through the promotion of brain health. For more information, visit www.alz.org. Media contact is Niles Frantz at 312-335-5777 or niles.frantz@alz.org.

The National Institute on Aging leads the federal government effort conducting and supporting research on aging and the health and well being of older people. The NIA provides information on age-related cognitive change and neurodegenerative disease specifically at its Alzheimer’s Disease Education and Referral (ADEAR) Center at www.nia.nih.gov/Alzheimers For more on health and on aging generally, go to www.nia.nih.gov. To sign up for e-mail alerts about new findings or publications, please visit either website. 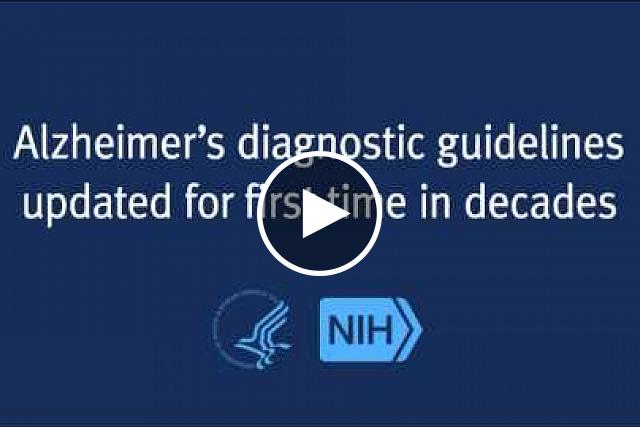 New approaches for clinicians and more advanced guidelines for scientists provide direction for research on diagnosis and treatments of Alzheimer’s disease. Experts say effort will benefit patients and accelerate the pace of research.