Children younger than 3 years old receive the same protective antibody response from the recommended two doses of licensed seasonal influenza vaccines regardless of whether the two doses are injected by needle, inhaled through a nasal spray or provided through one dose of each in any order, according to researchers funded by the National Institutes of Health. Doctors usually give young children two matching vaccines, and one goal of the study was to determine whether giving two different types of vaccines works just as well.

In addition, the researchers found that young children who received at least one dose of the nasal spray vaccine—a live, attenuated influenza virus vaccine (LAIV)—made a wide array of immune T cells. Stimulating broad T-cell responses may be important for protection against many diverse flu strains.

The study was conducted at vaccine and treatment evaluation units (VTEUs) funded by the NIH’s National Institute of Allergy and Infectious Diseases (NIAID). Daniel F. Hoft, M.D., Ph.D., and his colleagues at the Saint Louis University VTEU, along with other VTEU investigators at Vanderbilt University in Nashville, and the Cincinnati Children’s Hospital, co-authored the report, online in The Journal of Infectious Diseases.

Influenza vaccinations for young children are provided in a two-dose, prime-boost combination. The first vaccine dose is designed to prime the immune system to produce a favorable antibody response, and the second vaccine dose is the “boost” designed to spur an immune response.

“Severe complications from seasonal influenza can be devastating to young children,” said Anthony S. Fauci, M.D., NIAID director. “This study provides initial evidence that the prime and booster doses for these young children can be different types of flu vaccines and still provide adequate protection against matching seasonal flu strains.”

The trial took place during the 2005-2006 and the 2006-2007 flu seasons and involved 53 children aged 6 to 35 months. Study participants were divided into four groups of roughly equal size. None of the children had received an influenza vaccine before. During the study, all children received an initial dose of licensed seasonal flu vaccine and a booster dose one month later. In two groups, the vaccines matched, with children receiving two injections of a trivalent, inactivated vaccine (TIV) injection or two LAIV nasal spray vaccines. Children in the other two groups received a combination of vaccines, with a dose of LAIV given either before or after TIV. “Kids who have never been immunized against flu are generally advised to receive two doses of inactivated or live, attenuated vaccine to ensure adequate antibody responses,” noted Dr. Hoft, director of the division of infectious diseases, allergy and immunology at Saint Louis University. “Vaccination schedules combining one dose of TIV with one dose of LAIV have not been recommended because clinical studies of these combinations have not been done previously. However, due to vaccine availability or other factors, children may sometimes be given a mix of vaccines,” he added.

The researchers found that all four dosing patterns were safe and induced similar levels of protective antibodies. However, when the investigators looked at responses from the T-cell arm of the immune system, a striking difference emerged. They could not detect influenza-specific T cells in children who received only TIV, according to Dr. Hoft. But, he added, “The kids who received at least one dose of LAIV nasal spray vaccine produced significant amounts of three important T-cell subtypes that are likely to confer additional protection beyond that afforded by antibodies alone.”

Previous studies have demonstrated that children are better protected against influenza infection and disease by LAIV than by TIV, Dr. Hoft noted. However, few studies have examined the T-cell responses elicited by LAIV when given to very young children who have little prior natural exposure to seasonal influenza viruses. Distinguishing T-cell responses due to vaccination from those arising after natural exposure to influenza virus becomes more difficult as a child ages, he explained. Because the children in the trial were all younger than 3 years old, the researchers could be confident that spikes in levels of the three T-cell subtypes they detected were likely due to the vaccinations.

Children who received only one dose of LAIV had T-cell responses similar to those who received two, and the order of vaccine types did not make a significant difference in the size of the T-cell response. However, because LAIV has sometimes been associated with increased incidence of wheezing in the youngest recipients, the results of this trial suggest that the best regimen for kids younger than 24 months may be TIV followed by LAIV, Dr. Hoft said. Larger clinical trials are required to confirm the safety and efficacy of such an approach, he added.

In a separate series of experiments using influenza virus-infected cells grown in the laboratory, the scientists showed that LAIV, but not TIV, induces T cells that recognize genetic sequences shared by a diverse set of influenza viruses. In contrast to currently used flu vaccines—which must be given annually because circulating influenza viruses change from season to season—a vaccine capable of eliciting broad T-cell responses aimed at a portion of virus shared by multiple strains could provide decades-long protection against many or all flu strains, Dr. Hoft said.

NIAID conducts and supports research—at NIH, throughout the United States, and worldwide—to study the causes of infectious and immune-mediated diseases, and to develop better means of preventing, diagnosing and treating these illnesses. News releases, fact sheets and other NIAID-related materials are available on the NIAID Web site at http://www.niaid.nih.gov. 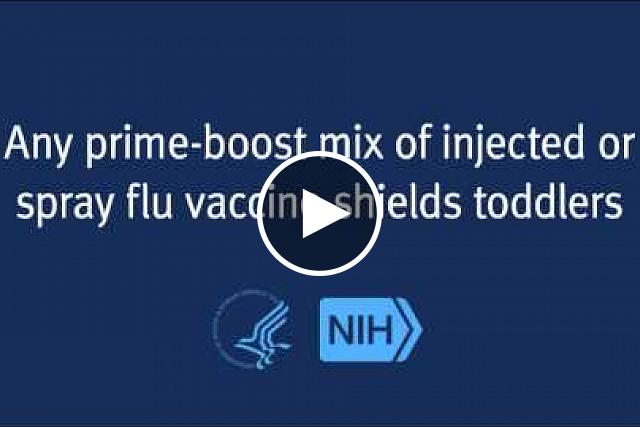 Research funded by NIH shows protection for children younger than 3 years is the same regardless of whether two doses of flu vaccine are injected by needle, inhaled through a nasal spray or provided through one dose of each in any order.