Injections of a new drug may partially relieve paralyzing spinal cord injuries, based on indications from a study in rats, which was partly funded by the National Institutes of Health.

The results demonstrate how fundamental laboratory research may lead to new therapies.

“We’re very excited at the possibility that millions of people could, one day, regain movements lost during spinal cord injuries,” said Jerry Silver, Ph.D., professor of neurosciences, Case Western Reserve University School of Medicine, Cleveland, and a senior investigator of the study published in Nature.

Every year, tens of thousands of people are paralyzed by spinal cord injuries. The injuries crush and sever the long axons of spinal cord nerve cells, blocking communication between the brain and the body and resulting in paralysis below the injury.

On a hunch, Bradley Lang, Ph.D., the lead author of the study and a graduate student in Dr. Silver’s lab, came up with the idea of designing a drug that would help axons regenerate without having to touch the healing spinal cord, as current treatments may require.

“Originally this was just a side project we brainstormed in the lab,” said Dr. Lang.

After spinal cord injury, axons try to cross the injury site and reconnect with other cells but are stymied by scarring that forms after the injury. Previous studies suggested their movements are blocked when the protein tyrosine phosphatase sigma (PTP sigma), an enzyme found in axons, interacts with chondroitin sulfate proteoglycans, a class of sugary proteins that fill the scars.

Dr. Lang and his colleagues designed a drug called ISP to block the enzyme and facilitate the drug’s entry into the brain and spinal cord. Injections of the drug under the skin of paralyzed rats near the injury site partially restored axon growth and improved movements and bladder functions.

“There are currently no drug therapies available that improve the very limited natural recovery from spinal cord injuries that patients experience,” said Lyn Jakeman, Ph.D., a program director at the NIH’s National Institute of Neurological Disorders and Stroke, Bethesda, MD. “This is a great step towards identifying a novel agent for helping people recover.”

Initially, the goal of the study was to understand how interactions between PTP sigma and chondroitin sulfate proteoglycans prevent axon growth. Drugs were designed to mimic the shape of a critical part of PTP sigma, called the wedge. Different designs were tested on neurons grown in petri dishes alongside impenetrable barriers of proteoglycans. Treatment with ISP freed axon growth.

“It was amazing. The axons kept growing and growing,” said Dr. Silver.

Next the researchers tested the potential of the drug on a rat model of spinal cord injury. For seven weeks they injected rats with the drug or a placebo near the site of injury. A few weeks later the rats that received the drug showed improvements in walking and urinating while the placebo treatments had no effect. The results suggested the drug passed into the brain and spinal cord.

When the researchers looked at the spinal cords under a microscope they found that the drug induced sprouting of axons that use the neurochemical serotonin to communicate. The sprouting axons were seen below the injury site. Treating some rats with a blocker of serotonin communication partially reversed the beneficial effects of ISP injections, suggesting the newly sprouting axons helped the rats recover.

The ISP drug did not cause spinal cord axons known to control movements to cross the scar and reconnect with brain neurons above the injury site. Dr. Silver and his colleagues think this means the ISP-induced sprouting helped the rats recover by increasing the signal sent by the few remaining intact axons.

“This is very promising. We now have an agent that may work alone or in combination with other treatments to improve the lives of many,” said Dr. Silver. He and his colleagues are seeking to test the ISP drug in preclinical trials. 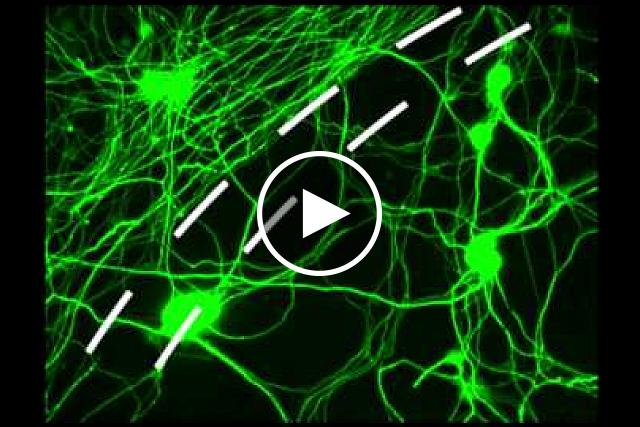