Some human brains are nearly twice the size of others – but how might that matter? Researchers at the National Institute of Mental Health (NIMH) and their NIH grant-funded colleagues have discovered that these differences in size are related to the brain’s shape and the way it is organized. The bigger the brain, the more its additional area is accounted for by growth in thinking areas of the cortex, or outer mantle – at the expense of relatively slower growth in lower order emotional, sensory, and motor areas.

“Just as different parts are required to scale-up a garden shed to the size of a mansion, it seems that big primate brains have to be built to different proportions,” explained Armin Raznahan, M.D., Ph.D., of the NIMH Intramural Research Program (IRP). “An extra investment has to be made in the part that integrates information – but that’s not to say that it’s better to have a bigger brain. Our findings speak more to the different organizational needs of larger vs. smaller brains.”

Raznahan, P.K. Reardon, Jakob Seidlitz, and colleagues at more than six collaborating research centers report on their study incorporating brain scan data from more than 3,000 people in Science. Reardon and Seidlitz are students in the NIH Oxford-Cambridge Scholars Program.

To pinpoint how the human brain’s organization varies in relation to how big it is, the researchers – including teams from the University of Pennsylvania, Philadelphia, and Yale University, New Haven, Connecticut, as well as the Douglas Mental Health University Institute, Verdun, Quebec – analyzed magnetic resonance imaging brain scans of youth from the Philadelphia Neurodevelopmental Cohort, a NIMH IRP sample, and the Human Connectome Project.

Cortex areas showing relatively more expansion in larger brains sit at the top of a network hierarchy and are specialized functionally, microstructurally and molecularly at integrating information from lower order systems. Since this theme holds up across evolution, development and inter-individual variation, it appears to be a deeply ingrained biological signature, Raznahan suggested. 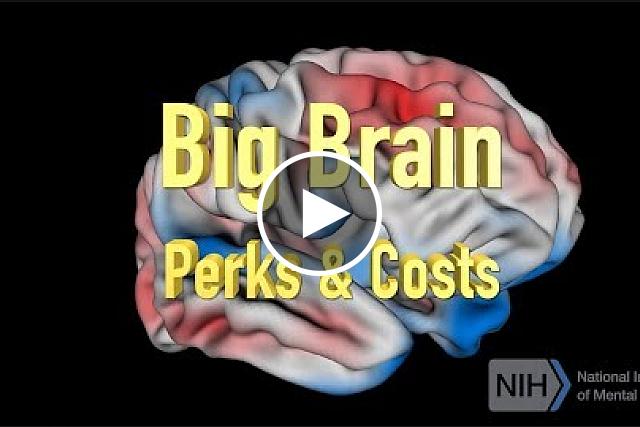 NIMH's Dr. Armin Raznahan explains results of a study of human brain size. His research team has discovered how the size of our brain relates to its shape and the way its organized. Some of us have brains that are almost twice as large as those of others. It turns out that the bigger our brain is, the more its additional real estate is accounted for by growth in the higher thinking areas of the cortex, or outer mantle – at the expense of relatively slower growth in lower emotional, sensory and motor areas. This mirrors the pattern of brain changes seen in primate evolution and individual maturation – with higher-order areas showing greatest expansion. In the neuroimaging study of more than 3000 people, the investigators also found evidence linking these high-expanding regions to higher connectivity between neurons and higher energy consumption.

“Not all cortex regions are created equal. The high-expanding regions seem to exact a higher biological cost,” explained Raznahan. “There’s biological ‘money’ being spent to grow that extra tissue. These regions seem to be greedier in consuming energy; they use relatively more oxygenated blood than low-expanding regions. Gene expression related to energy metabolism is also higher in these regions. It’s expensive, and nature is unlikely to spend unless it’s getting a return on its investment.”

Since people with certain mental disorders show alterations in brain size related to genetic influences, the new cortex maps may improve understanding of altered brain organization in disorders. The higher expanding regions are also implicated across diverse neurodevelopmental disorders, so the new insights may hold clues to understanding how genetic and environmental changes can impact higher mental functions.

“Our study shows there are consistent organizational changes between large brains and small brains,” said Raznahan. “Observing that the brain needs to consistently configure itself differently as a function of its size is important for understanding how the brain functions in health and disease states.”