The finding raises the possibility that, one day, imaging or other measures of brain activity could be used to predict which individuals with dyslexia would most readily benefit from various specific interventions.

"This finding provides insight into how certain individuals with dyslexia may compensate for reading difficulties," said Alan E. Guttmacher, M.D., director of the NIH's Eunice Kennedy Shriver National Institute of Child Health and Human Development, which provided funding for the study. "Understanding the brain activity associated with compensation may lead to ways to help individuals with this capacity draw upon their strengths. Similarly, learning why other individuals have difficulty compensating may lead to new treatments to help them overcome reading disability."

The study findings were published online in Proceedings of the National Academy of Sciences. The study’s first author was Fumiko Hoeft, M.D., Ph.D., of the Stanford University School of Medicine.

The adolescents were shown pairs of printed words, and asked to identify pairs that rhymed. The adolescents who would later compensate for their dyslexia showed a pattern of increased activity in the brain region known as the inferior frontal gyrus, an area on the right side of the head, slightly below and behind the temple. This brain area governs the ability to halt an ongoing activity, like stopping at a traffic light. Similarly, DTI scans of the brain also revealed stronger connections in the superior longitudinal fasiculus(also on the right side), a network of neural fibers linking the front and rear of brain. The fibers are involved in the processing of visual aspects of text. The researchers do not know how the inferior frontal gyrus and superior longitudinal fasiculus are involved in compensating for dyslexia.

The 45 adolescents who took part in the study ranged from 11 to 14 years old. Each child underwent a battery of tests to determine reading abilities. Among the series of tests were measures of phonemic awareness (the ability to distinguish between the sounds that make up spoken words), how well they could comprehend what they read, how fluently and accurately they could read, how fast they could read, spelling ability, the ability to rapidly name objects, letters, numbers and colors, and the size of their vocabularies.

The researchers classified 25 adolescents as having dyslexia based on their scores in these tests.

The researchers used the term dyslexia to describe the reading difficulties experienced by the adolescents in the study. These individuals have a learning disability that makes learning to read much more challenging and often requires more intensive interventions to help them succeed.

Dr. Hoeft said that, in the study, the adolescents who were classified as dyslexic had difficulty learning to read despite adequate teaching and exposure to written language.

The researchers adapted computer algorithms used in artificial intelligence research to refine the data collected by the scanner, to gauge subtle brain functioning and structure with a high degree of accuracy.

When the researchers administered the reading test battery to the adolescents two and one half years later, they found that the 13 adolescents who showed the strong activation pattern in the inferior frontal gyrus were much more likely to have compensated for their reading difficulty than were the remaining 12 dyslexic adolescents.

Dr. Hoeft, explained, that the largest improvement was seen in reading comprehension, which she said is the ultimate goal of reading. The adolescents showed less improvement in other reading-related skills such as phonemic awareness (distinguishing the sounds that make up spoken words). Good readers tend to develop phonemic awareness skills before developing fluency and comprehension skills. Dr. Hoeft said that the findings suggest that the brains of the dyslexic adolescents relied on the right side of the brain to compensate for their reading difficulties, rather than on developing regions in the left side of their brains (involved with phonemic awareness), as typical readers do.

In fact, through their analysis of brain activation patterns and brain structure, the researchers could predict with more than 90 percent accuracy which adolescents would compensate for their dyslexia.

“Our findings add to a body of studies looking at a wide range of conditions that suggest brain imaging may help determine when a treatment is likely to be effective or which patients are most susceptible to risks,” said Dr. Hoeft.

In contrast, the testing battery the researchers used did not indicate which of the dyslexic adolescents would improve their reading ability.

Additional information is available at the dyslexia information page, at http://www.ninds.nih.gov/disorders/dyslexia/dyslexia.htm. Information on reading disability and other learning disorders can be found at https://www.nichd.nih.gov/health/topics/learning/Pages/default.aspx.

The NICHD sponsors research on development, before and after birth; maternal, child, and family health; reproductive biology and population issues; and medical rehabilitation. For more information, visit the Institute's Web site at http://www.nichd.nih.gov/. 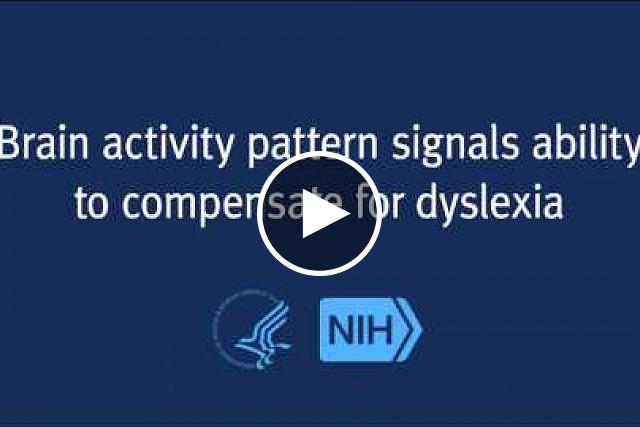