In youth with attention deficit hyperactivity disorder (ADHD), the brain matures in a normal pattern but is delayed three years in some regions, on average, compared to youth without the disorder, an imaging study by researchers at the National Institutes of Health’s (NIH) National Institute of Mental Health (NIMH) has revealed. The delay in ADHD was most prominent in regions at the front of the brain’s outer mantle (cortex), important for the ability to control thinking, attention and planning. Otherwise, both groups showed a similar back-to-front wave of brain maturation with different areas peaking in thickness at different times.

"Finding a normal pattern of cortex maturation, albeit delayed, in children with ADHD should be reassuring to families and could help to explain why many youth eventually seem to grow out of the disorder," explained Philip Shaw, M.D., NIMH Child Psychiatry Branch, who led research team.

Previous brain imaging studies failed to detect the developmental lag because they focused on the size of the relatively large lobes of the brain. The sharp differences emerged only after a new image analysis technique allowed the researchers to pinpoint the thickening and thinning of thousands of cortex sites in hundreds of children and teens, with and without the disorder.

"If you’re just looking at the lobes, you have only four measures instead of 40,000," explained Shaw. "You don’t pick up the focal, regional changes where this delay is most marked."

Among 223 youth with ADHD, half of 40,000 cortex sites attained peak thickness at an average age of 10.5, compared to age 7.5 in a matched group of youth without the disorder.

Shaw, Judith Rapoport, M.D., of the NIMH Child Psychiatry Branch, Alan Evans, M.D., of McGill University, and colleagues report on their magnetic resonance imaging (MRI) study during the week of November 12, 2007, in the online edition of the Proceedings of the National Academy of Sciences.

The researchers scanned most of the 446 participants — ranging from preschoolers to young adults — at least twice at about three-year intervals. They focused on the age when cortex thickening during childhood gives way to thinning following puberty, as unused neural connections are pruned for optimal efficiency during the teen years.

In both ADHD and control groups, sensory processing and motor control areas at the back and top of the brain peaked in thickness earlier in childhood, while the frontal cortex areas responsible for higher-order executive control functions peaked later, during the teen years. These frontal areas support the ability to suppress inappropriate actions and thoughts, focus attention, remember things from moment to moment, work for reward, and control movement — functions often disturbed in people with ADHD.

Circuitry in the frontal and temporal (at the side of the brain) areas that integrate information from the sensory areas with the higher-order functions showed the greatest maturational delay in youth with ADHD. For example, one of the last areas to mature, the middle of the prefrontal cortex, lagged five years in those with the disorder.

The motor cortex emerged as the only area that matured faster than normal in the youth with ADHD, in contrast to the late-maturing frontal cortex areas that direct it. This mismatch might account for the restlessness and fidgety symptoms common among those with the disorder, the researchers suggested.

They also noted that the delayed pattern of maturation observed in ADHD is the opposite of that seen in other developmental brain disorders like autism, in which the volume of brain structures peak at a much earlier-than-normal age.

The findings support the theory that ADHD results from a delay in cortex maturation. In future studies, the researchers hope to find genetic underpinnings of the delay and ways of boosting processes of recovery from the disorder.

"Brain imaging is still not ready for use as a diagnostic tool in ADHD," noted Shaw. "Although the delay in cortex development was marked, it could only be detected when a very large number of children with the disorder were included. It is not yet possible to detect such delay from the brain scans of just one individual. The diagnosis of ADHD remains clinical, based on taking a history from the child, the family and teachers."

The National Institute of Mental Health (NIMH) mission is to reduce the burden of mental and behavioral disorders through research on mind, brain, and behavior. More information is available at the NIMH website, http://www.nimh.nih.gov. 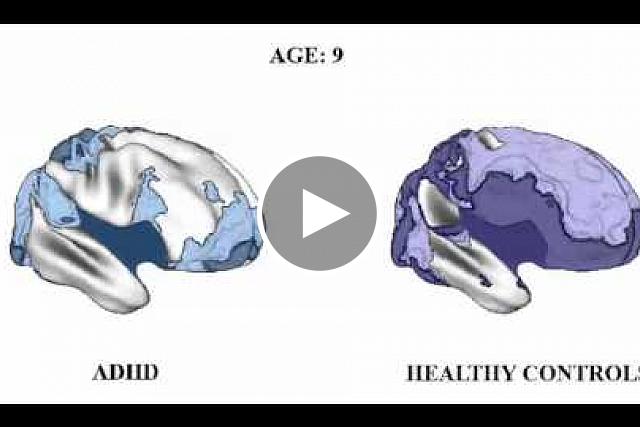 Maturation of the brain, as reflected in the age at which a cortex area attains peak thickness, in ADHD (above) and normal development (below). Lighter areas are thinner, darker areas thicker. Light blue in the ADHD sequence corresponds to the same thickness as light purple in the normal development sequence. The darkest areas in the lower part of the brain, which are not associated with ADHD, had either already peaked in thickness by the start of the study, or, for statistical reasons, were not amenable to defining an age of peak cortex thickness. Movie of same data below. Source: NIMH Child Psychiatry Branch.