Cigarette and alcohol use at historic low among teens

Cigarette and alcohol use by eighth, 10th and 12th-graders are at their lowest point since the Monitoring the Future (MTF) survey began polling teenagers in 1975, according to this year’s survey results. However, this positive news is tempered by a slowing rate of decline in teen smoking as well as continued high rates of abuse of other tobacco products (e.g., hookahs, small cigars, smokeless tobacco), marijuana and prescription drugs. The survey results, announced today during a news conference at the National Press Club, appear to show that more teens continue to abuse marijuana than cigarettes; and alcohol is still the drug of choice among all three age groups queried.

"That cigarette use has declined to historically low rates is welcome news, given our concerns that declines may have slowed or stalled in recent years," said NIDA director Dr. Nora D. Volkow. "That said, the teen smoking rate is declining much more slowly than in years past, and we are seeing teens consume other tobacco products at high levels. This highlights the urgency of maintaining strong prevention efforts against teen smoking and of targeting other tobacco products."

"While it is good news that cigarette use has declined to historically low rates, we can and must do more to accelerate that decline," said Howard K. Koh, MD, MPH, assistant secretary for health. "The actual decline is relatively small compared to the sharp declines we witnessed in the late nineties."

"K2 and spice are dangerous drugs that can cause serious harm," said Gil Kerlikowske, director of National Drug Control Policy. "We will continue to work with the public health and safety community to respond to this emerging threat but in the meantime, parents must take action. Parents are the most powerful force in the lives of young people and we ask that all of them talk to their teens today about the serious consequences of using marijuana, K2, or spice."

There was mixed news seen in the non-medical use of prescription drugs. Abuse of the opioid painkiller Vicodin was reported by 8.1 percent of 12th graders — similar to 2010 and down from 9.7 percent in 2009. There was also a decline reported by 10th graders — to 5.9 percent from 7.7 percent in 2010. However, no such declines were seen for the opioid painkiller OxyContin.

In 2011, the non-medical use of the ADHD medicines Adderall and Ritalin remained about the same as last year among 12th-graders, at 6.5 and 2.6 percent, respectively. There was, however, a significant decline in the abuse of over-the-counter cough medicine among eighth-graders, down to 2.7 percent in 2011 from 4.2 percent in 2006, when the survey first asked about its abuse. A similar decline in cough medicine abuse was seen among 12th-graders, to 5.3 percent from 6.9 percent five years ago.

"To help educate teens about the dangers of prescription drug abuse, NIDA is launching an updated prescription drug section on our teen website," said Dr. Volkow. "Teens can go to our PEERx pages to find interactive videos and other tools that help them make healthy decisions and understand the risks of abusing prescription drugs. We are also encouraging teens to provide feedback on these resources through NIDA's teen blog, Sara Bellum, Twitter, Facebook, YouTube, or email." PEERx can be seen at http://teens.drugabuse.gov/peerx.

Overall, 46,773 students from 400 public and private schools participated in this year's MTF survey. Since 1975, the survey has measured drug, alcohol, and cigarette use and related attitudes in 12th-graders nationwide. Eighth and 10th graders were added to the survey in 1991. Survey participants generally report their drug use behaviors across three time periods: lifetime, past year, and past month. Questions are also asked about daily cigarette and marijuana use. NIDA has providing funding for the survey since its inception by a team of investigators at the University of Michigan, led by Dr. Lloyd Johnston. Additional information on the MTF Survey, as well as comments from Dr. Volkow, can be found at www.drugabuse.gov/drugpages/MTF.html. To hear the audiocast of the event, visit: www.visualwebcaster.com/MonitoringTheFuture.

MTF is one of three major surveys sponsored by the U.S Department of Health and Human Services that provide data on substance use among youth. The others are the National Survey on Drug Use and Health and the Youth Risk Behavior Survey. The MTF website is: http://monitoringthefuture.org . Follow Monitoring the Future 2011 news on Twitter at @NIDANews, or join the conversation by using: #MTF2011. Additional information on MTF can be found at www.hhs.gov/news ; or www.whitehousedrugpolicy.gov .

The National Survey on Drug Use and Health, sponsored by the Substance Abuse and Mental Health Services Administration, is the primary source of statistical information on substance use in the U.S. population 12 years of age and older. More information is available at: http://www.samhsa.gov/data/NSDUH/2k10NSDUH/2k10Results.htm .

The Youth Risk Behavior Survey, part of HHS' Centers for Disease Control and Prevention's Youth Risk Behavior Surveillance System, is a school-based survey that collects data from students in grades 9-12. The survey includes questions on a wide variety of health-related risk behaviors, including substance abuse. More information is available at www.cdc.gov/nccdphp/dash/yrbs/index.htm .

The National Institute on Drug Abuse is a component of the National Institutes of Health, U.S. Department of Health and Human Services. NIDA supports most of the world’s research on the health aspects of drug abuse and addiction. The Institute carries out a large variety of programs to inform policy and improve practice. Fact sheets on the health effects of drugs of abuse and information on NIDA research and other activities can be found on the NIDA home page at www.drugabuse.gov. To order publications in English or Spanish, call NIDA's DrugPubs research dissemination center at 1-877-NIDA-NIH or 240-645-0228 (TDD) or fax or email requests to 240-645-0227 or drugpubs@nida.nih.gov. Online ordering is available at http://drugpubs.drugabuse.gov. NIDA's media guide can be found at http://drugabuse.gov/mediaguide. 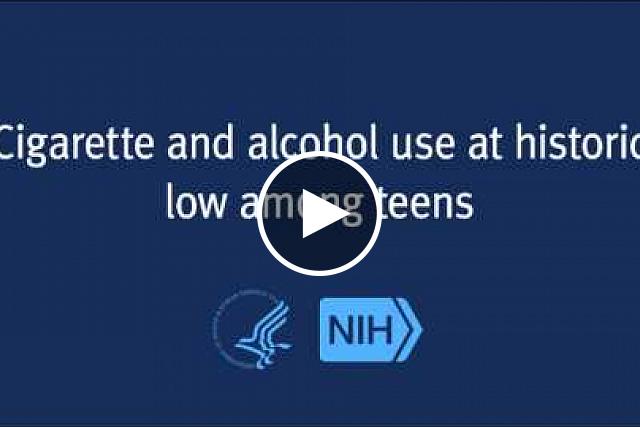 A survey shows low use of cigarettes and alcohol by teens, but high levels of marijuana and prescription drug abuse.