Adding a common antibiotic to the usual daily treatment regimen for chronic obstructive pulmonary disease (COPD) can reduce the occurrence of acute exacerbations and improve quality of life, reports new results from a clinical trial funded by the National Heart, Lung, and Blood Institute (NHLBI), part of the National Institutes of Health.

The study will appear in the Aug. 25 issue of the New England Journal of Medicine.

“Acute exacerbations account for a significant part of COPD’s health burden,” said Susan B. Shurin, M.D., acting director of the NHLBI. “These promising results with azithromycin may help us reduce that burden and improve the lives of patients at risk.”

COPD exacerbations are sudden onsets of worsened cough, wheeze, and labored breathing which are typically induced by bacterial and/or viral infection. Azithromycin is already prescribed for a wide variety of bacterial infections including pneumonia and strep throat. Previous research suggested that this antibiotic might work for COPD exacerbations, but this study was the first to enroll a large number of COPD patients and treat exacerbations with this drug over a long time. Participants had a history of exacerbations in the previous year or needed oxygen therapy.

Eighty percent of the study participants were already taking other medications normally used to manage COPD, including inhaled steroids and long-acting bronchodilators.

“This study suggests that azithromycin’s benefits extend beyond those of other therapies,” noted James Kiley, Ph.D., director of the NHLBI’s Division of Lung Diseases. Kiley added that more research is needed to determine the long-term effects of azithromycin treatment and to identify which group of patients would benefit the most.

Side effects of azithromycin during the study were minimal. The presence of microbes resistant to azithromycin increased in some patients, although no one developed a clinically evident infection. A small fraction of participants receiving azithromycin were found to have slight hearing loss, which is a known side effect of the drug. Azithromycin can also cause heart arrhythmias in susceptible people. No heart rhythm abnormalities were seen in study patients, though people with heightened risks for arrhythmias were not enrolled in the study.

COPD is a progressive disease of the lungs that affects over 12 million people in the United States and is now the third leading cause of death in this country. There is currently no cure, though a combination of drugs and lifestyle changes can help manage the symptoms.

The study was carried out by the COPD Clinical Research Network (CCRN), an NHLBI-funded consortium of research centers located throughout the U.S. that was established to study new treatments for COPD.

To schedule an interview with an NHLBI spokesperson, contact the NHLBI Office of Communications at 301-496-4236 or NHLBI_news@nhlbi.nih.gov.

Learn more about the study: Macrolide Azithromycin to Prevent Rapid Worsening of Symptoms Associated with COPD (NCT00325897) at http://clinicaltrials.gov/ct2/show/NCT00325897.

The National Heart, Lung, and Blood Institute (NHLBI) is a component of the National Institutes of Health. NHLBI plans, conducts, and supports research related to the causes, prevention, diagnosis, and treatment of heart, blood vessel, lung, and blood diseases; and sleep disorders. The Institute also administers national health education campaigns on women and heart disease, healthy weight for children, and other topics. NHLBI press releases and other materials are available online at: www.nhlbi.nih.gov. 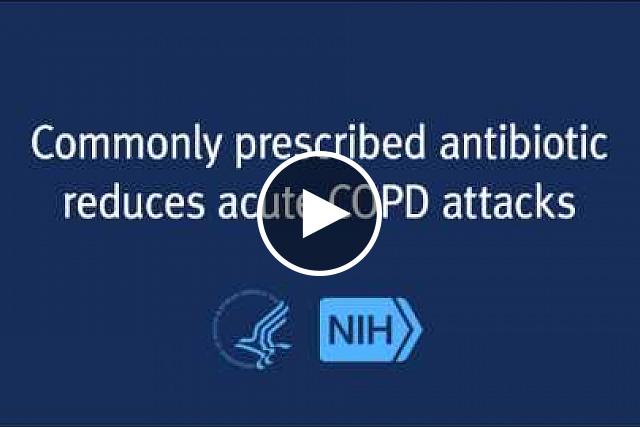 An NIH-funded study has found that a commonly prescribed antibiotic lowers the frequency and severity of chronic obstructive pulmonary disease (COPD) flare-ups. The study results, which appear in the New England Journal of Medicine, show azithromycin may reduce the burden of COPD and improve the quality of life for patients.