Unprecedented details of enamel structure may point to new ways to prevent or halt cavities. 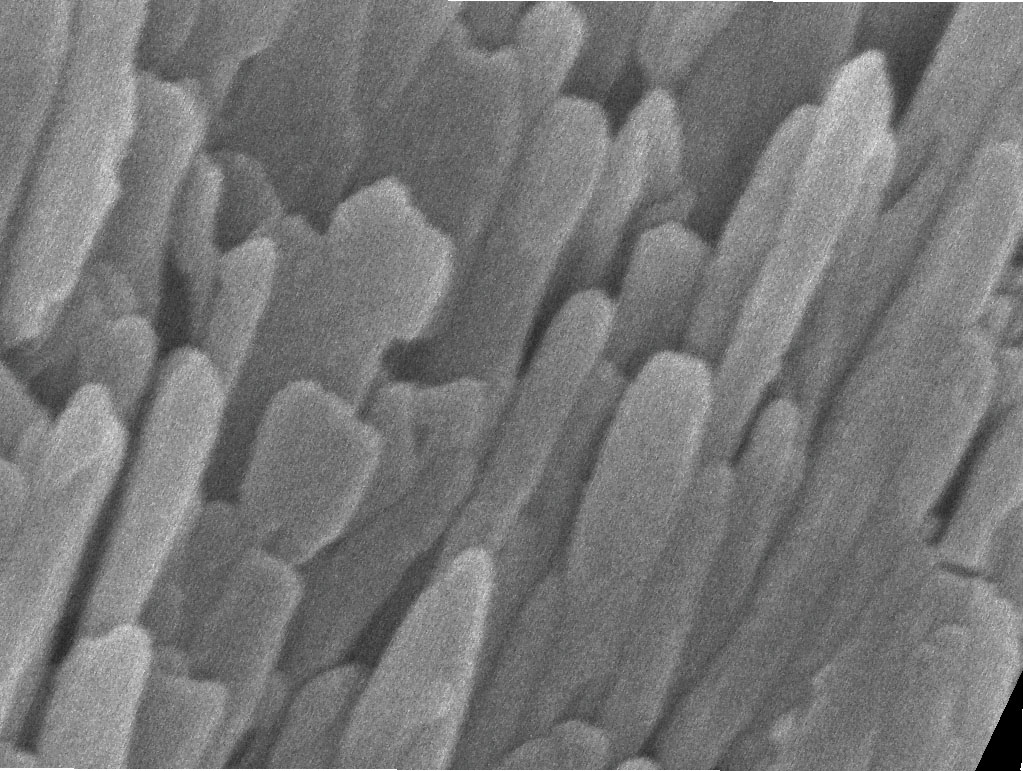 Enamel is made up of tightly bunched, oblong crystals that are about 1,000 times smaller in width than a human hair.Karen DeRocher, Northwestern University

Scientists used a combination of advanced microscopy and chemical detection techniques to uncover the structural makeup of human tooth enamel at unprecedented atomic resolution, revealing lattice patterns and unexpected irregularities. The findings could lead to a better understanding of how tooth decay develops and might be prevented. The research was supported in part by the National Institute of Dental and Craniofacial Research (NIDCR) at the National Institutes of Health. The findings appear in Nature.

“This work provides much more detailed information about the atomic makeup of enamel than we previously knew,” said Jason Wan, Ph.D., a program officer at NIDCR. “These findings can broaden our thinking and approach to strengthening teeth against mechanical forces, as well as repairing damage due to erosion and decay.”

Your teeth are remarkably resilient, despite enduring the stress and strain of biting, chewing, and eating for a lifetime. Enamel — the hardest substance in the human body — is largely responsible for this endurance. Its high mineral content gives it strength. Enamel forms the outer covering of teeth and helps prevent tooth decay, or caries.

Tooth decay is one of the most common chronic diseases, affecting up to 90% of children and the vast majority of adults worldwide, according to the World Health Organization. Left untreated, tooth decay can lead to painful abscesses, bone infection, and bone loss.

Tooth decay starts when excess acid in the mouth erodes the enamel covering. Scientists have long sought a more complete picture of enamel’s chemical and mechanical properties at the atomic level to better understand—and potentially prevent or reverse—enamel loss.

To survey enamel at the tiniest scales, researchers use microscopy methods such as scanning transmission electron microscopy (STEM), which directs a beam of electrons through a material to map its atomic makeup. 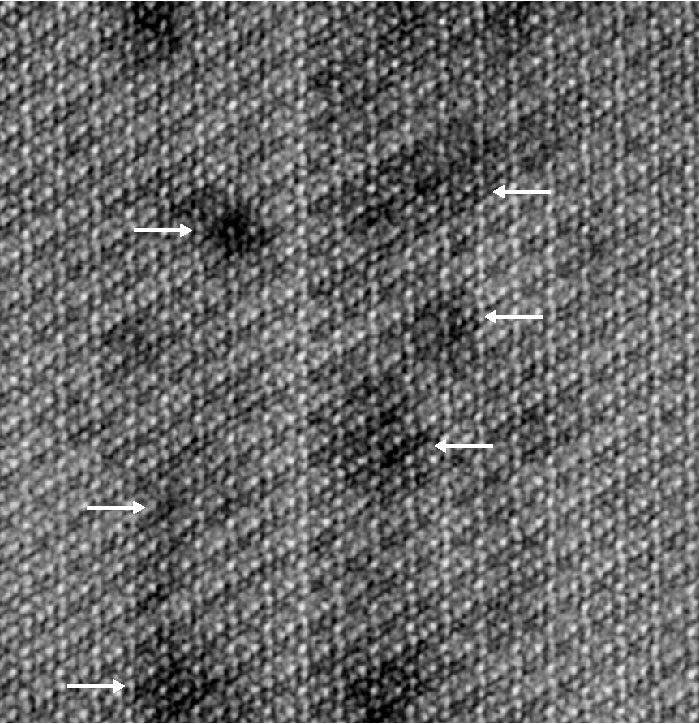 STEM studies have shown that at the nanoscale, enamel comprises tightly bunched oblong crystals that are about 1,000 times smaller in width than a human hair. These tiny crystallites are made mostly of a calcium- and phosphate-based mineral called hydroxylapatite. STEM studies coupled with chemical detection techniques had hinted at the presence of much smaller amounts of other chemical elements, but enamel’s vulnerability to damage from high-energy electron beams prevented a more thorough analysis at the necessary level of resolution.

To define these minor elements, a team of scientists at Northwestern University, Evanston, Illinois, used an imaging tool called atom probe tomography. By successively removing layers of atoms from a sample, the technique provides a more refined, atom-by-atom view of a substance. The Northwestern group was among the first to use atom probe tomography to probe biological materials, including components of teeth.

“Earlier studies revealed the bulk composition of enamel, which is like knowing the overall makeup of a city in terms of its population,” said senior author Derk Joester, Ph.D., a professor of materials science and engineering at Northwestern. “But it doesn’t tell you how things operate at the local scale in a city block or a single house. Atom probe tomography gave us that more detailed view.”

The scientists used atom probe tomography and advanced STEM techniques in a complementary fashion to overcome prior technical limitations. The Northwestern researchers worked with imaging experts led by Lena Kourkoutis, Ph.D., an associate professor of applied and engineering physics and director of electron microscopy at Cornell University’s national materials science user facility, PARADIM, in Ithaca, New York. At Cornell, the scientists coupled an ultra-fast chemical detector with STEM at very low temperatures to minimize enamel damage and gather more detailed chemical data. The complementary approaches enabled the team to piece together information at multiple levels of resolution to get a more complete view of the chemical and structural features of enamel crystallites.

The results showed that the crystallites were made of a continuous uniform lattice of hydroxylapatite atoms. However, the lattice structure appeared to be sprinkled with dark distortions, especially at the innermost core of the crystallites.

A closer look at the core revealed that these defects were caused by the presence of minor elements that previous studies had hinted at. One such element was magnesium, which was highly concentrated in two distinct layers in the core. The central region was also rich in sodium, fluorine, and carbonate. Flanking the core was a “shell” with much lower concentrations of these elements.

“We assumed that human crystallites would be similar in composition to rodent enamel, which is widely used by researchers to understand human enamel,” said co-first author Paul Smeets, Ph.D., a research associate in the Northwestern Atomic and Nanoscale Characterization Experimental Center. “But that was not the case — human enamel is much more chemically complex than we thought.”

three views of the same sample of enamel crystallites, atom probe tomography reveals the distributions of three minor elements, with each colored dot representing a single atom. These maps show that magnesium is present in two distinct layers in the core, and fluorine and sodium are heavily concentrated in the areas between crystallites, known as the intergranular phase. Karen DeRocher, Northwestern University

The scientists suspected that the irregularities introduced by magnesium layers give rise to areas of strain in the crystallite. Computer modeling supported their hunch, predicting higher stresses in the core than in the shell.

“Stress may sound bad, but in material science it can be useful, and we think it may make enamel stronger overall,” said co-first author Karen DeRocher, a graduate student in Joester’s lab. “On the other hand, those stresses are predicted to make the core more soluble, which might lead to erosion of enamel.”

Indeed, when the researchers exposed crystallites to acid—similar to what happens in the mouth—the core showed more erosion than the shell. Further modeling and experiments will be necessary to confirm these results, as well as to explore the idea that stress introduced by chemical impurities may fortify enamel and make it more resistant to fracture. The group also plans to continue using these approaches to learn more about how acid affects enamel.

“This new information will enable model-based simulation of enamel degradation that wasn’t possible before, helping us better understand how caries develops,” said DeRocher.

The findings could lead to new approaches to toughen enamel and prevent or reverse cavity formation.

This research was supported by NIDCR grants DE025303 and DE025702. Support also came from the National Science Foundation, the University of Virginia, 3M, the Natural Sciences and Engineering Research Council of Canada, Northwestern University, the Deutsche Forschungsgemeinschaft, Office of Naval Research, the International Institute for Nanotechnology, the Keck Foundation, the State of Illinois, the NASA Ames Research Center, Cornell University, the Weill Institute, the Kavli Institute, the National Research Council of Canada, the Canadian Institutes of Health Research, the Province of Saskatchewan, Western Economic Diversification Canada, and the University of Saskatchewan.