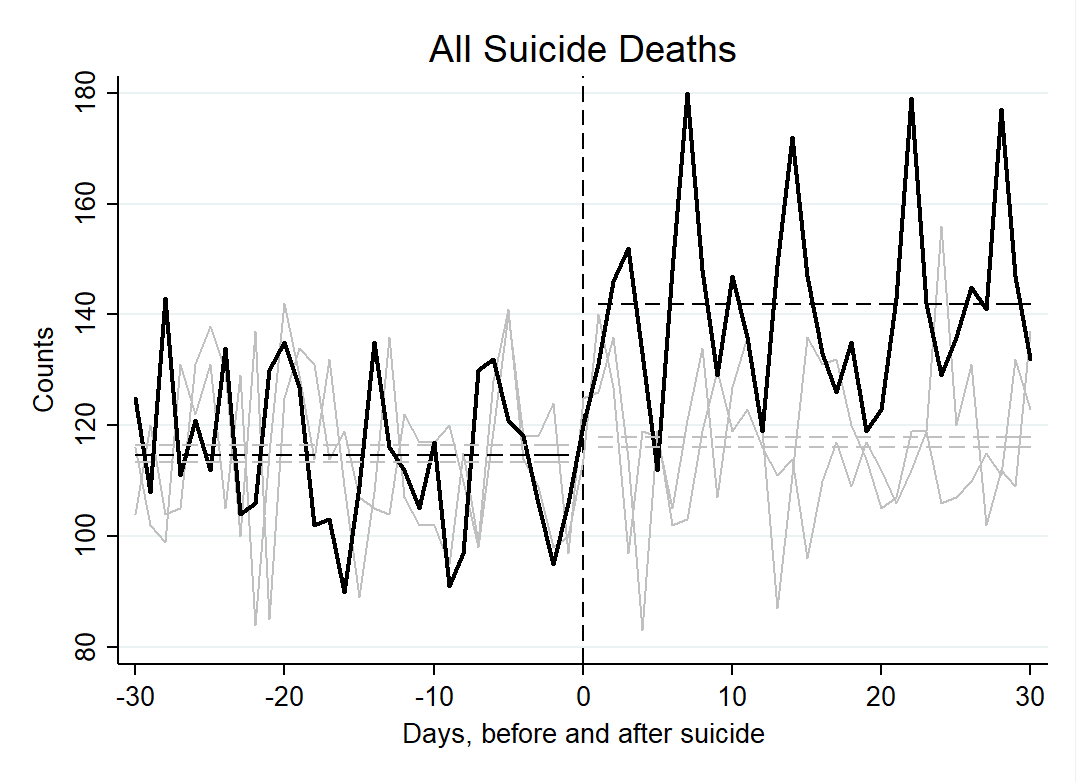 The United States may lack the resources needed to meet increases in demand for suicide prevention services that occur after celebrity suicides, according to a recent study of crisis mental health services. The study, conducted by a team of researchers, which included scientists from the National Institute of Mental Health (NIMH), part of the National Institutes of Health, highlights the need for suicide prevention hotlines to procure additional funds, allocate existing funds more efficiently, and develop contingency plans to accommodate increases in call volumes, particularly for the first two days after a celebrity suicide. The findings appear in the journal Psychiatric Services.

“Suicide prevention is a significant public health concern and a top priority for NIMH,” said Joshua A. Gordon, M.D., Ph.D., director of NIMH. “This study highlights the importance of the National Suicide Prevention Lifeline and other crisis mental health services, and the need to build surge capacity of these services that could help save lives.”

Suicide is the second leading cause of death for people in the U.S. between the ages of 10 and 34, and the suicide rate continues to rise. Suicide rates generally follow predictable patterns, with increases in the spring and a second, smaller increase in early summer. But certain events, like highly-publicized celebrity suicides, can serve as “shocks” that cause a sudden spike in suicide deaths.

To test the ability of crisis mental health services to meet a sudden increase in demand for help, this study looked at increases in suicide rates within 30 days of Robin Williams’ suicide on Aug. 11, 2014. It also looked at changes in help - and information-seeking related to suicide, and changes in the percent of calls the National Suicide Prevention Lifeline (NSPL) was able to answer after Williams’ death. 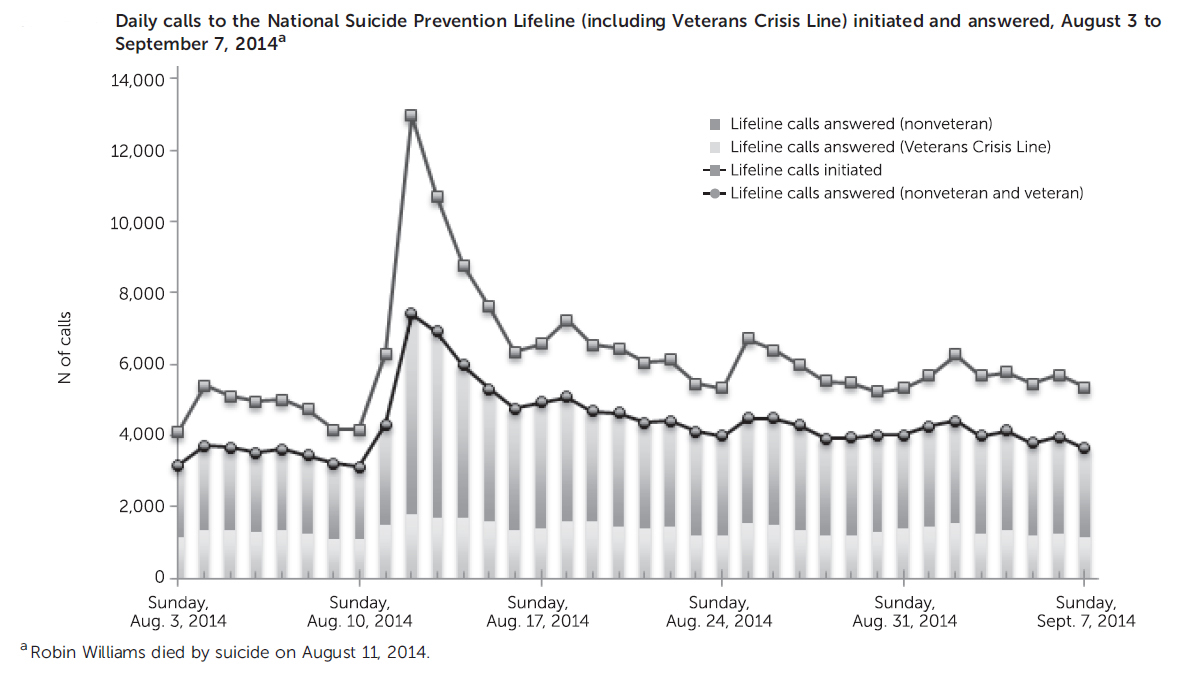 The researchers used data from the Centers for Disease Control and Prevention National Center for Health Statistics’ Compressed Mortality File to compare the number of suicide deaths and the method of suicide in the 30 days before and after Aug. 11, 2014, and for the same time period in 2012 and 2013.  In 2012-2014, there was an average of 113-117 suicide deaths per day; after Williams’ suicide, the average rate increased to 142 suicide deaths per day, something not observed in 2012 or 2013. Approximately two-thirds of the people who died by suicide immediately after the actor’s death used the same method of suicide as Williams.

The study also examined the number of calls placed to NSPL immediately before and after Williams ended his life to measure whether media coverage of his death prompted more people to reach out for help. The day after he died, the number of calls increased by up to 300 percent - from between 4,000 to 6,000 calls per day to 12,972. However, without capacity to respond to this increased demand for crisis services, the fraction of answered calls decreased from an average of 73 percent to 57 percent, which highlights a gap in the ability of the NSPL to respond to surges in calls for help.

To measure information-seeking behavior, the study looked at visits to the Suicide Prevention Resource Center (SRPC) and Suicide Awareness Voices of Education (SAVE) websites. In the week before Williams died, the SPRC website averaged 2,315 visits per day. The day after his death, there were 5,981 visits to the site. The SAVE website averaged 4,239 visits per day in the week before he died, and 24,819 visits on August 12. Average daily visits to both sites remained consistently higher for the rest of the month of August.

The study suggests that both efficient allocation of existing funds and procuring new funding will be critical to continue meeting the demand for crisis mental health services, including surge capacity.>

“Crisis mental health services, such as suicide prevention hotlines and websites, provide effective counseling and vital resources for people in suicide distress. We need to ensure these services have sufficient resources to serve the public 24/7, especially in times of increased demand,” said Jane Pearson, Ph.D., chair of the Suicide Research Consortium in NIMH’s Division of Services and Intervention Research.

“Shocking events, like Mr. Williams’ suicide, disrupt normal patterns in suicide rates, and cause an increase in both calls for help and imitative suicides,” said lead researcher Rajeev Ramchand, Ph.D., of the Cohen Veterans Network. “This highlights the need for additional and consistent support for crisis mental health services, including hospital emergency departments, law enforcement, poison control centers, and health departments, as well as the mental health resources that serve as referral sources.”