The researchers found that youth who were frequently involved with bullying behaviors, regardless of the type of bullying involved, reported higher depression scores than did youth only occasionally involved with such behaviors

Unlike traditional forms of bullying, youth who are the targets of cyber bullying at school are at greater risk for depression than are the youth who bully them, according to a survey conducted by researchers at the National Institutes of Health.

The new finding is in contrast to earlier studies of traditional bullying, which found that the highest depression scores were reported by another category of youth involved in bullying-bully victims. Past studies on traditional bullying show that bully-victims — those who both bully others and are bullied themselves — are more likely to report feelings of depression than are other groups.

"Notably, cyber victims reported higher depression than cyber bullies or bully-victims, which was not found in any other form of bullying," the study authors wrote in the Journal of Adolescent Health. "…unlike traditional bullying which usually involves a face-to-face confrontation, cyber victims may not see or identify their harasser; as such, cyber victims may be more likely to feel isolated, dehumanized or helpless at the time of the attack."

The analysis, of 6th through 10th grade students, was conducted by Jing Wang, Ph.D., Tonja R. Nansel, Ph.D., and Ronald J. Iannotti, Ph.D., all of the Division of Epidemiology, Statistics and Prevention Research at NIH's Eunice Kennedy Shriver National Institute of Child Health and Human Development.

Being bullied interferes with scholastic achievement, development of social skills, and general feelings of well being, explained Dr. Iannotti, the study's senior author. In a study published last year, he and study coauthors reported that the prevalence of bullying is high, with 20.8 percent of U.S. adolescents in school having been bullied physically at least once in the last two months, 53.6 percent having been bullied verbally, and 51.4 percent bullied socially (excluded or ostracized), and 13.6 percent having been bullied electronically (http://www.ncbi.nlm.nih.gov/pubmed/19766941).

The U.S. Health Resources and Services Administration advises parents to encourage children to tell them immediately if they are victims of cyberbullying or other troublesome online behaviors. The agency also lists a number of steps that parents can take to help prevent cyber bullying and how to respond to it, at http://www.stopbullyingnow.hrsa.gov/adults/default.aspx. The site also includes extensive information on preventing and dealing with traditional forms of bullying. The Center for Disease Control also provides information on electronic aggression for parents, educators, and researchers at http://www.cdc.gov/ViolencePrevention/youthviolence/electronicaggression/index.html

In the current study, the research team sought to examine the association between depression and cyber bullying, which has not been studied extensively.

Victims of cyber bullying scored higher for feelings of depression than did bully-victims, a finding not seen with any other category of bullying.

To conduct the study, the researchers analyzed data on American students collected in the 2005/2006 Health Behavior in School-aged Children Study, an international study of adolescents in 43 countries (http://www.hbsc.org/overview.html). The researchers measured depression by gauging responses to six survey items. Students were asked to indicate, if, within the past 30 days, they felt very sad; grouchy or irritable, or in a bad mood; hopeless about the future; felt like not eating or eating more than usual; slept a lot more or a lot less than usual; and had difficulty concentrating on their school work. Students ranked their response according to a five item scale ranging from "never" to "always."

They were also asked to indicate whether they were involved with bullying behaviors, whether as perpetrators or victims. Survey questions were designed to measure the following forms of bullying: physical (hitting), verbal (such as name calling), relational (social isolation and spreading false rumors), and cyber (using computers or cell phones). The researchers classified bullying others or being bullied "two or three times a month" as frequent, and "only once or twice" as occasional. Respondents were further classified as either not involved with bullying (either as bullies or victims), bullies, victims, or bully-victims (who had bullied others and also been bullied themselves).

For physical violence, no differences were found in depression scores among bullies, victims, or bully-victims. For verbal and relational bullying, victims and bully-victims reported higher levels of depression than bullies.

Because of the association between bullying and depression, bullies, bully-victims, and victims are candidates for evaluation by a mental health professional, Dr. Wang said.

Information about depression and its treatment is available from the National Institute of Mental Health, at http://www.nimh.nih.gov/health/topics/depression/index.shtml

Dr. Wang noted that in their earlier study, she and her coworkers had found that students were less likely to bully or to be victimized if they felt they had strong parental support—feeling that their parents helped them as much as they needed, were loving, understood their problems and worries, and helped them to feel better when they were upset. 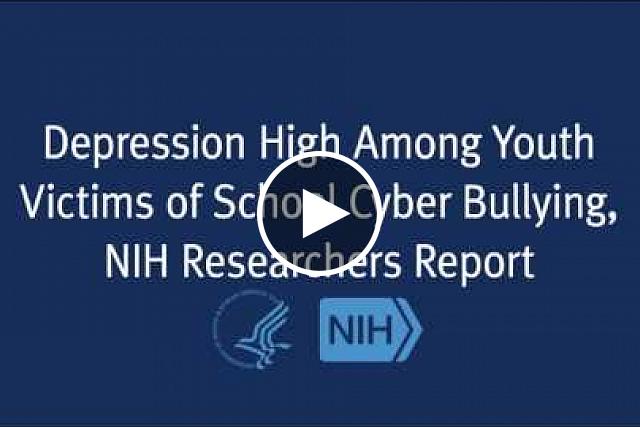 Unlike traditional forms of bullying, youth who are the targets of cyber bullying at school are at greater risk for depression than are the youth who bully them, according to a survey conducted by researchers at the National Institutes of Health.