People who drink more are also likely to eat less fruit and consume more calories from a combination of alcoholic beverages and foods high in unhealthy fats and added sugars, according to a new study by researchers at the National Institute on Alcohol Abuse and Alcoholism (NIAAA), National Cancer Institute (NCI), and the the U.S. Department of Agriculture (USDA).

The study of more than 15,000 adults in the United States found that increased alcoholic beverage consumption was associated with decreased diet quality. The article is in the April 2010 issue of the Journal of the American Dietetic Association.

The researchers analyzed data collected from participants in the National Health and Nutrition Examination Survey (NHANES), an ongoing survey of cross-sectional samples of the U.S. population conducted by the U.S. Department of Health and Human Services’ Centers for Disease Control and Prevention. Data included alcohol consumption information as well as Healthy Eating Index (HEI)-2005 scores. Created by the USDA, the HEI-2005 measures how closely diets conform to the 2005 U.S. Dietary Guidelines for Americans.

"We found that as alcoholic beverage consumption increased, Healthy Eating Index scores decreased, an indication of poorer food choices," said first author Rosalind A. Breslow, Ph.D., an epidemiologist in NIAAA's Division of Epidemiology and Prevention Research. "It's important to note that our study did not determine the cause of these associations."

A previous study by Dr. Breslow and her colleagues showed that people who drink the largest quantities of alcohol have the poorest quality diets. In the present study, they were able to identify specific dietary components that worsened with increased alcohol intake. In addition to decreased fruit consumption and increased caloric intake among both men and women, the researchers found that increased alcoholic beverage consumption was associated with a decreased intake of whole grains and milk among men.

"Our findings underscore the importance of moderation for individuals who choose to consume alcoholic beverages, and a greater awareness of healthy food choices among such individuals," noted Dr. Breslow.

The 2005 U.S. Dietary Guidelines define moderate drinking as no more than one drink on any day for women and no more than two drinks on any day for men. It is important for people to consume nutrient-dense foods, like whole fruits and whole grains, that provide substantial amounts of vitamins, minerals, and fiber, and relatively few calories, while limiting the consumption of alcohol, unhealthy fats, and added sugars, which provide calories but few essential nutrients.

The National Institute on Alcohol Abuse and Alcoholism, part of the National Institutes of Health, is America's authority on alcohol research and health. The primary U.S. agency for conducting and supporting research on the causes, consequences, prevention, and treatment of alcohol abuse, alcoholism, and alcohol problems, NIAAA also disseminates research findings to general, professional, and academic audiences. Additional alcohol research information and publications are available at www.niaaa.nih.gov. 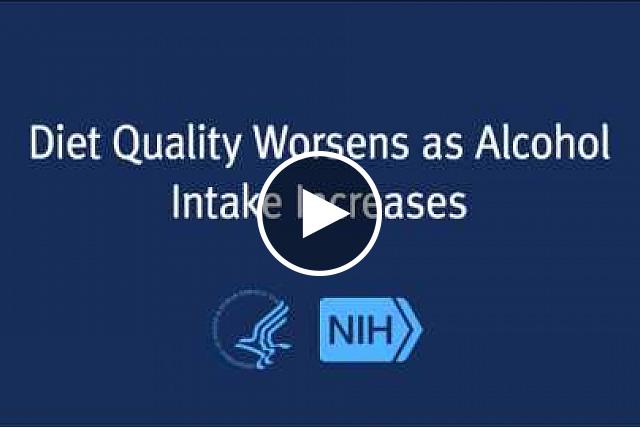 Alcohol misuse and dietary factors independently are associated with chronic health problems. The current study of more than 15,000 U.S. adults found that increased alcoholic beverage consumption was associated with decreased diet quality. It extends previous related findings by identifying specific dietary components that worsened with increased alcohol intake. The findings underscore the importance of moderate alcohol consumption and greater awareness of healthy eating among those who drink.