To measure children's ability to estimate and compare quantities, the researchers administered two series of tests. In the first, the children viewed groups of dots and were asked to say whether there were more blue or yellow dots. In the second, nine to 15 dots of one color appeared, and the children were asked to say how many dots they saw. Each screen was visible for only one fifth of a second.

Researchers funded by the National Institutes of Health have discovered that the innate ability to estimate quantities is impaired in children who have a math learning disability.

The link between difficulty estimating quantities and math difficulties was seen only in children who had a math learning disability, and not in those who did poorly in math but were not considered to be learning disabled.

"The findings suggest that students may struggle with math for very different reasons," said Kathy Mann Koepke, Ph.D., director of the Mathematics and Science Cognition and Learning program at the NIH’s Eunice Kennedy Shriver National Institute of Child Health and Human Development (NICHD), which funded the study. "Research to identify these reasons may lead to new ways of identifying those at risk, and developing the means to help them."

Math learning disability is also referred to as dyscalculia.

The study was published in Child Development and was conducted by Michèle Mazzocco, Ph.D., at the Kennedy Krieger Institute and the Johns Hopkins University in Baltimore, and her colleagues, Lisa Feigenson, Ph.D., and Justin Halberda, Ph.D., also at Johns Hopkins.

In earlier research, Drs. Feigenson and Halberda have shown that the innate ability to estimate and compare quantities is present in infancy and improves with age.

"People rely on this ability in daily life," Dr. Mazzocco said. "A familiar example is when people size up which line will move more quickly at the grocery store, based on their perception of the number of persons and items per line."

The researchers compared children’s ability to estimate quantity with their level of mathematics achievement.

To conduct the study, the researchers gave 71 ninth graders two series of tests designed to measure their ability to estimate quantities, a capability governed by what the researchers referred to as the approximate number system (ANS). The students were a subset of a larger sample of 161 students from Dr. Mazzocco's ongoing long-term research study. The children's math abilities had been tested at regular intervals since kindergarten.

The ninth graders were classified into four groups, based on math achievement scores they had received since kindergarten.

For the first series of ANS tests, the students viewed a computer screen showing a group of blue and yellow dots, and were asked to say whether more blue or yellow dots appeared.

In the second series, nine to 15 dots of one color appeared, and the students were asked to say how many dots they saw.

Each screen flashed before their eyes for one fifth of a second, so the students did not have time to count the dots before answering. Each series of tests consisted of dozens of screens; the researchers considered the most accurate answers across the two series to indicate a more highly developed approximate number system.

The researchers found that students with math learning disability (math scores at or below the 10th percentile) had the poorest ANS scores. Dr. Mazzocco said that this finding suggests that problems with the ANS underlie math difficulties for children in this group.

However, children in the 11th to 25th percentile, on average, were no more likely to have poor ANS scores than were children in higher percentiles, who had no mathematical difficulties. It seems likely, Dr. Mazzocco said, that math difficulties in this group stem from a cause or causes distinct from the ANS.

"Children with mathematical learning difficulties are often viewed as a uniform group of students, for whom a single type of special instruction or math curriculum is appropriate," Dr. Mazzocco said. "Our findings suggest, however, that children have difficulty with math for different reasons."

Approximately 10 percent of school-age children have persistent and significant difficulties with math, and many more fail to achieve basic levels of mathematics achievement, Dr. Mazzocco said.

"If you have a health problem, a physician will examine you to determine the details of your condition and then will recommend a treatment plan specific to your needs," said Dr. Mazzocco. "In the same way, educators need to be able to determine the factors underlying math difficulties so that they can tailor instructional methods to individual students’ needs. A poor number sense seems to underlie math learning disability for many individuals, but it may not underlie poor math achievement for all students who struggle with math."

About the Eunice Kennedy Shriver National Institute of Child Health and Human Development (NICHD): The NICHD sponsors research on development, before and after birth; maternal, child, and family health; reproductive biology and population issues; and medical rehabilitation. For more information, visit the Institute’s Web site at http://www.nichd.nih.gov/. 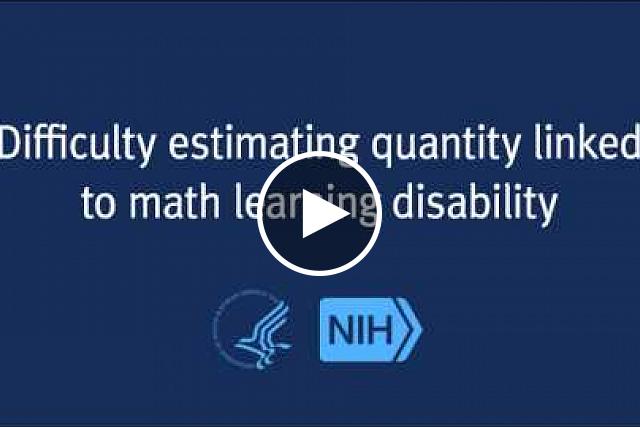 Researchers have discovered that in children who have a math learning disability the ability to estimate quantities that usually exists from birth is impaired.