The architecture of the autistic brain is speckled with patches of abnormal neurons, according to research partially funded by the National Institute of Mental Health (NIMH), part of the National Institutes of Health. Published in the New England Journal of Medicine on March 27, 2014, this study suggests that brain irregularities in children with autism can be traced back to prenatal development.

“While autism is generally considered a developmental brain disorder, research has not identified a consistent or causative lesion,” said Thomas R. Insel, M.D., director of NIMH. “If this new report of disorganized architecture in the brains of some children with autism is replicated, we can presume this reflects a process occurring long before birth. This reinforces the importance of early identification and intervention.”

Eric Courchesne, Ph.D. and Rich Stoner, Ph.D., of the Autism Center of Excellence at the University of California, San Diego joined colleagues from the Allen Institute for Brain Science to investigate the cellular architecture of the brain’s outermost structure, the cortex, in children with autism. Courchesne recently reported an overabundance of neurons in the prefrontal cortex of children with autism.

For the current study, the researchers analyzed gene expression in postmortem brain tissue from children with and without autism, all between 2 and 15 years of age.

As the prenatal brain develops, neurons in the cortex differentiate into six layers. Each is composed of particular types of brain cells with specific patterns of connections. The research team focused on genes that serve as cellular markers for each of the cortical layers as well as genes that are associated with autism.

The study found that the markers for several layers of the cortex were absent in 91 percent of the autistic case samples, as compared to 9 percent of control samples. Further, these signs of disorganization were not found all over the brain’s surface, but instead were localized in focal patches that were 5-7 millimeters (0.20-0.28 inches) in length and encompassed multiple cortical layers.

These patches were found in the frontal and temporal lobes of the cortex—regions that mediate social, emotional, communication, and language functions. Considering that disturbances in these types of behaviors are hallmarks of autism, the researchers conclude that the specific locations of the patches may underlie the expression and severity of various symptoms in a child with the disorder.

The patchy nature of the defects may explain why early treatments can help young infants and toddlers with autism improve. According to the researchers, since the faulty cell layering does not occur over the entire cortex, the developing brain may have a chance to rewire its connections by sidestepping the pathological patches and recruiting cells from neighboring brain regions to assume critical roles in social and communication functions. 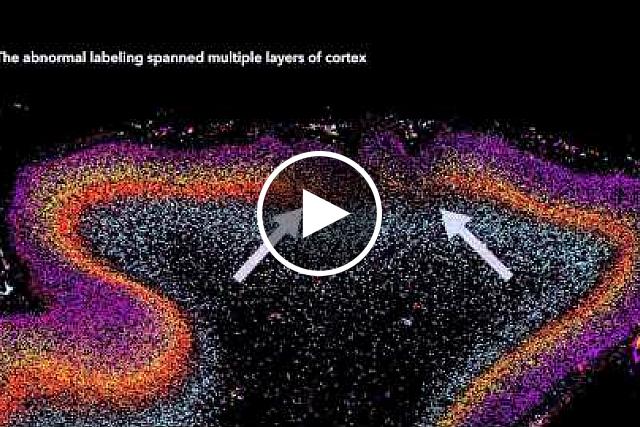 Patches of Disorganization in the Neocortex of Children with Autism.