A study of tissue samples from 161 marine mammals that died between 2004 and 2009 in the Pacific Northwest reveals an association between severe illness and co-infection with two kinds of parasites normally found in land animals. One, Sarcocystis neurona, is a newcomer to the northwest coastal region of North America and is not known to infect people, while the other, Toxoplasma gondii, has been established there for some time and caused a large outbreak of disease in people in 1995.

Scientists from the National Institute of Allergy and Infectious Diseases (NIAID), part of the National Institutes of Health, collaborated with investigators in Washington state and Canada in the research, published online May 24 in the open-access journal PLoS Neglected Tropical Diseases.

Toxoplasmosis, the illness caused by T. gondii infection, is generally not serious in otherwise healthy people, but the parasites can cause severe or fatal disease in people with compromised immune systems and can also damage the fetuses of pregnant women. The parasites are globally distributed and enter water via infected cat feces.

"Chlorination does not kill T. gondii, but filtration eliminates them from the water supply," noted lead researcher Michael Grigg, Ph.D., of the NIAID Laboratory of Parasitic Diseases. Although S. neurona parasites do not infect people, other closely related species of Sarcocystis parasites do. "The public health message here is that people can easily avoid the parasites by filtering or boiling untreated water. Limiting serious disease in marine mammals, however, will require larger conservation efforts to block these land pathogens from flowing into our coastal waters."

During the six-year study period, more than 5,000 dead marine mammals were reported on the coastal beaches of the Pacific Northwest, Dr. Grigg said. Some deaths ascribed to parasitic encephalitis (brain swelling) were assumed to be caused by T. gondii, he noted, because the parasite can infect most mammals and was well established in the region.

To determine the cause of death of the marine animals, Dr. Grigg collaborated with veterinary pathologist Stephen Raverty, D.V.M., Ph.D., of the British Columbia Ministry of Agriculture and Food and the University of British Columbia, and marine mammal researchers Dyanna Lambourn, of the Washington Department of Fish and Wildlife, and Jessica Huggins, of Cascadia Research Collective. Specimens were collected and animal autopsies (necropsies) conducted by members of the Northwest and British Columbia Marine Mammal Stranding Network.

Necropsies were performed on 151 marine mammals with suspected cases of parasitic encephalitis. The mammals included several kinds of seals and sea lions, Northern sea otters, a Pacific white-sided dolphin, porpoises and three species of whale. An additional 10 animals, all healthy adult California sea lions that were euthanized in the Columbia River to protect fish stocks, were included in the study as controls. Dr. Raverty’s group examined brain tissue from 108 animals positive for either S. neurona or T. gondii. They measured the number of parasites in the tissues and combined that with an assessment of the degree of brain inflammation to gauge whether the infection was likely to be the primary, contributing or incidental cause of death.

At NIAID, Dr. Grigg and his team screened 494 brain, heart, lymph node and other tissue samples with a variety of genetic techniques. "Our techniques are unbiased in that we do not directly search for any particular species of parasite," said Dr. Grigg. "Rather, the screens simply reveal evidence of any parasite in the tissue being studied." The team then applied gene amplifying and gene sequencing methods to identify the species and, often, the subtype or lineage of the microbes.

They found parasites in 147 of the 161 animals studied — 32 were infected with T. gondii, 37 with S. neurona and 62 with both parasites. The remaining 16 infections were caused by various other parasites, including several that had not been detected before in any kind of animal. Notably, all 10 healthy animals were infected with either one or both of the parasites.

"The presence of T. gondii did not surprise us, but the abundance of S. neurona infections was quite unexpected," said Dr. Grigg. The researchers theorize that S. neurona has been introduced into the Pacific Northwest by opossums, which gradually have been expanding their range northward from California and can shed an infectious form of the parasite in their feces. The ample rainfall in the region provides an easy route for infected feces to enter inland and coastal waterways and then contaminate shellfish and other foods eaten by marine mammals.

"The most remarkable finding of our study was the exacerbating role that S. neurona appears to play in causing more severe disease symptoms in those animals that are also infected with T. gondii," said Dr. Grigg. Among animals for which necropsy had suggested parasitic infection as the primary cause of death, the co-infected animals were more likely to display evidence of severe brain tissue inflammation than those infected by either S. neurona or T. gondii alone. The two parasites are closely related, and other studies had suggested that a mammal's acquired immunity after a first infection with one parasite might protect it from severe illness following infection by the other. However, that was clearly not the case in this study, noted Dr. Grigg. The study results also hinted that animals with lowered immunity, such as pregnant or nursing females or very young animals, were more likely to have worse symptoms when co-infected with both T. gondii and S. neurona.

"Identifying the threads that connect these parasites from wild and domestic land animals to marine mammals helps us to see ways that those threads might be cut," said Dr. Grigg, "by, for example, managing feral cat and opossum populations, reducing run-off from urban areas near the coast, monitoring water quality and controlling erosion to prevent parasites from entering the marine food chain."

NIAID conducts and supports research — at NIH, throughout the United States, and worldwide — to study the causes of infectious and immune-mediated diseases, and to develop better means of preventing, diagnosing and treating these illnesses. News releases, fact sheets and other NIAID-related materials are available on the NIAID Web site at http://www.niaid.nih.gov. 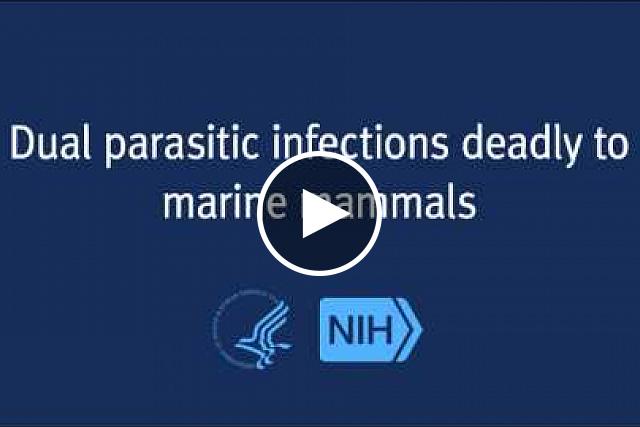 An NIH study finds that seal, sea otter and porpoise deaths are linked to co-infection with two parasites normally found in land animals.