Slicing optional. Scientists can now study the brain’s finer workings, while preserving its 3-D structure and integrity of its circuitry and other biological machinery.

A breakthrough method, called CLARITY, developed by National Institutes of Health-funded researchers, opens the intact postmortem brain to chemical, genetic and optical analyses that previously could only be performed using thin slices of tissue. By replacing fat that normally holds the brain’s working components in place with a clear gel, they made its normally opaque and impenetrable tissue see-through and permeable. This made it possible to image an intact mouse brain in high resolution down to the level of cells and molecules. The technique was even used successfully to study a human brain.

“CLARITY has the potential to unmask fine details of brains from people with brain disorders without losing larger-scale circuit perspective,” said NIH Director Francis S. Collins, M.D., Ph.D., whose NIH Director’s Transformative Research Award Program helped to fund the research, along with a grant from the National Institute of Mental Health NIMH.

Deisseroth, Kwanghun Chung, Ph.D., and other Stanford colleagues report on their findings April 10, 2013 in the journal Nature.

“This feat of chemical engineering promises to transform the way we study the brain’s anatomy and how disease changes it,” said NIMH Director Thomas R. Insel, M.D. “No longer will the in-depth study of our most important three-dimensional organ be constrained by two-dimensional methods.”

Until now, researchers seeking to understand the brain’s fine structure and connections have been faced with tradeoffs. To gain access to deeply buried structures and achieve high enough resolution to study cells, molecules and genes, they had to cut brain tissue into extremely thin sections (each a fraction of a millimeter thick), deforming it. Loss of an intact brain also makes it difficult to relate such micro-level findings to more macro-level information about wiring and circuitry, which cuts across slices.

In tackling this challenge, the researchers saw opportunity in the fact that the fats, or lipids, that physically support the brain’s working components, such as neurons and their connections, also block chemical probes and the passage of light. So replacing the lipids with something clear and permeable — that would also hold everything else in place — might make it possible to perform the same tests in an intact brain that previously could only be done with brain tissue slices.

Deisseroth’s team infused into brain a high-tech cocktail, including a plastic-like material and formaldehyde. When heated, it formed a transparent, porous gel that biochemically integrated with, and physically supported, the brain’s working tissue – while excluding the lipids, which were safely removed via an electrochemical process. The result was a brain transformed for optimal accessibility.

Using CLARITY, the researchers imaged the entire brain of a mouse that had been genetically engineered to express a fluorescent protein. A conventional microscope revealed glowing details, such as proteins embedded in cell membranes and individual nerve fibers, while an electron microscope resolved even ultra-fine structures, such as synapses, the connections between neurons.

In a series of experiments using CLARITY in mouse brain, the researchers demonstrated that, for the first time, standard immune- and genetics-based tests can be performed repeatedly in the same intact brain. Tracer molecules, such as antibodies, can be readily delivered for staining tissue — or removed — leaving brain tissue undisturbed.

The researchers found that CLARITY outperformed conventional methods across a range of previously problematic technical challenges.

When they used CLARITY to analyze a post-mortem human brain of a person who had autism, even though it had been hardening in formaldehyde for six years, they were able to trace individual nerve fibers, neuronal cell bodies and their extensions.

The mission of the NIMH is to transform the understanding and treatment of mental illnesses through basic and clinical research, paving the way for prevention, recovery and cure. For more information, visit http://www.nimh.nih.gov

The NIH Common Fund encourages collaboration and supports a series of exceptionally high impact, trans-NIH programs. These new programs are funded through the Common Fund, and managed by the NIH Office of the Director in partnership with the various NIH Institutes, Centers and Offices. Common Fund programs are designed to pursue major opportunities and gaps in biomedical research that no single NIH Institute could tackle alone, but that the agency as a whole can address to make the biggest impact possible on the progress of medical research. Additional information about the NIH Common Fund can be found at http://commonfund.nih.gov. 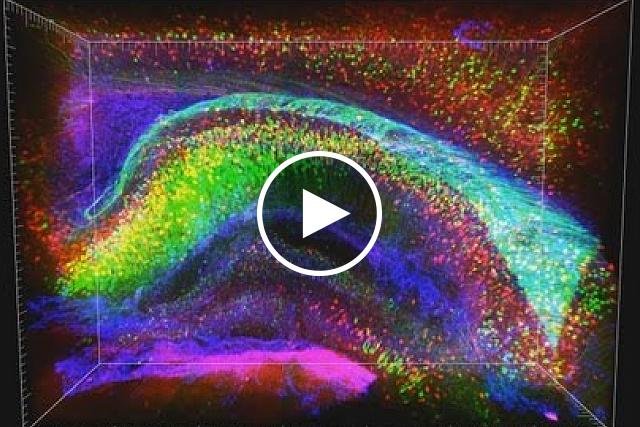 CLARITY provided this 3D view showing a thick slice of a mouse brain’s memory hub, or hippocampus. It reveals a few different types of cells: projecting neurons (green), connecting interneurons (red), and layers of support cells, or glia (blue). Conventional 2D methods require that brain tissue be thinly sliced, sacrificing the ability to analyze such intact components in relation to each other. CLARITY permits such typing of molecular and cellular components to be performed repeatedly in the same brain. Source: Karl Deisseroth, Stanford University 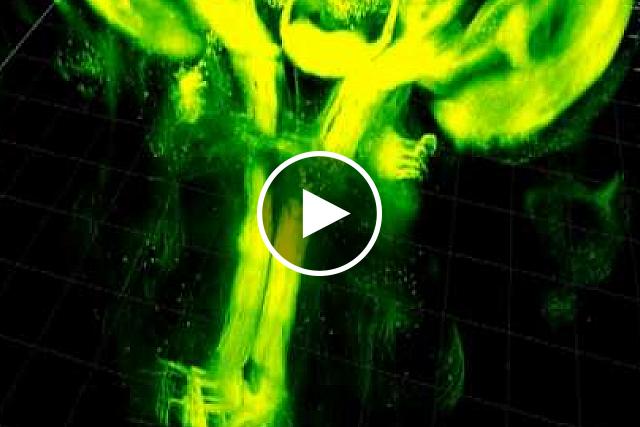 CLARITY makes possible this 3D tour of an entire, intact mouse brain. It was imaged using a fluorescence technique that previously could only be performed with thinly-sliced brain tissue, making it difficult to relate micro-level findings to macro-level information about wiring and circuitry.