Gene therapy preserved vision in a study involving dogs with naturally occurring, late-stage retinitis pigmentosa, according to research funded by the National Eye Institute (NEI), part of the National Institutes of Health. The findings contribute to the groundwork needed to move gene therapy forward into clinical trials for people with the blinding eye disorder, for which there is currently no cure.

Scientists from the University of Pennsylvania and the University of Florida, Gainesville also determined for the first time that gene therapy may be of potential benefit even after there has been significant loss of cells in the eye. Up to this point, animal studies had shown benefits from gene therapy only when it was used in the earliest stages of the disease.

“The study shows that a corrective gene can stop the loss of photoreceptors in the retina, and provides good proof of concept for gene therapy at the intermediate stage of the disease, thus widening the therapeutic window,” said Neeraj Agarwal, Ph.D., a program director at NEI.

Retinitis pigmentosa is the most common inherited disease that causes degeneration of the retina, the light-sensitive tissue lining the back of the eye. Roughly 1 in 4,000 people are affected and about 10 to 20 percent have a particularly severe form called X-linked retinitis pigmentosa, which predominately affects males, causing night blindness by age 10 and progressive loss of the visual field by age 45.

About 70 percent of people with the X-linked form carry mutations that cause loss of function of the retinitis pigmentosa GTPase Regulator (RPGR) gene, which encodes a protein important for maintaining the health of photoreceptors. These are cells in the retina that absorb and convert light into electrical signals, which are then sent to the brain. The disease damages both types of photoreceptors: rods (which allow us to see in dim and dark light) and cones (which allow for seeing fine detail and color).

To overcome the effects of RPGR mutations, the researchers packaged healthy RPGR genes into an adeno-associated virus that is not known to cause any human diseases. The aim is for the virus to deliver the genes into retinal cells and for the genes to produce the RPGR protein.

The researchers then tested the gene therapy in a naturally occurring canine form of RPGR X-linked retinitis pigmentosa that appears among some mixed breeds. Dogs with early to late stages of the disease were treated with the therapy in one eye; the untreated eye was evaluated as the control. Their results are published in Proceedings of the National Academy of Sciences.

Serial imaging suggested that the therapy halted the thinning of the retinal layer where photoreceptors are located and that commonly degenerates from the disease. Using immunolabeling, a technique that helps tag features inside cells, the researchers showed that the structure of rod and cone photoreceptors was improved in the treated eye and better preserved when compared to the untreated eye. Electrical recordings from the retina also suggested that the therapy preserved cell function. Overall, the findings suggest that gene therapy halted disease-associated cell death for at least the length of the 2.5-year study.

Even in dogs with later-stage disease, gene therapy halted the loss of retinal thickness and preserved the structure of surviving photoreceptors. By contrast, untreated eyes continued to lose retinal thickness and photoreceptor function. Visual performance under dim light in an obstacle course, and in a maze that required detecting a dim light, were also significantly better in dogs using their treated eye compared with the untreated eye.

Before the therapy can be tested in people, additional research is needed to assess its safety and the risk for potential toxicity, said the study’s co-leaders, Gustavo Aguirre, V.M.D., Ph.D., and William Beltran, D.V.M., Ph.D., of the University of Pennsylvania. In the meantime, study collaborators, Artur Cideciyan, Ph.D., and Samuel Jacobson, M.D., Ph.D., also at the University of Pennsylvania are carefully evaluating patients with RPGR mutations in preparation for a future clinical trial.

NEI leads the federal government's research on the visual system and eye diseases. NEI supports basic and clinical science programs that result in the development of sight-saving treatments. For more information, visit http://www.nei.nih.gov. 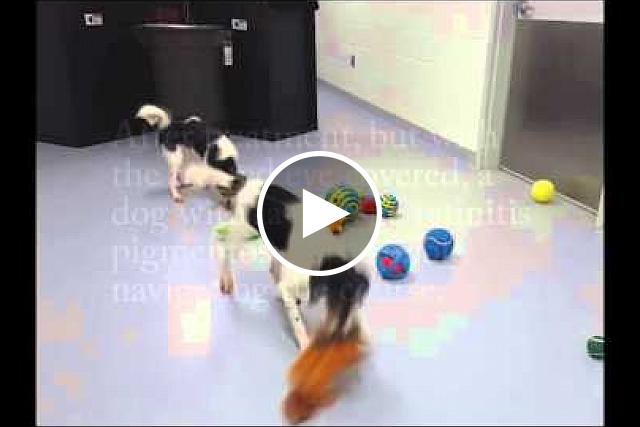 NEI-funded researchers, led by the University of Pennsylvania, tested the impact of gene therapy on a dog’s vision by comparing how well it navigated an obstacle course using its untreated eye, and then its treated eye.