An early education program for children from low-income families is estimated to generate $4 to $11 of economic benefits over a child's lifetime for every dollar spent initially on the program, according to a cost-benefit analysis funded by the National Institutes of Health.

For the analysis, researchers evaluated the effectiveness of the Chicago Public Schools' federally funded Child-Parent Centers (CPCs)(http://www.cps.edu/Schools/Preschools/Pages/Childparentcenter.aspx), established in 1967. The current analysis was part of a longer term effort to evaluate the benefits of intensive early education and parental support on children’s health and development. The researchers surveyed study participants and their parents, and analyzed education, employment, criminal justice and child welfare records for the participants through to age 26. A previous analysis found that children who had been enrolled in CPCs were more likely to go to college, get a full-time job and have health insurance (http://www.nichd.nih.gov/news/releases/early_interventions_082107.cfm). The same students were less likely to go to prison and less likely to suffer from depressive symptoms.

A cost-benefit analysis of CPC attendees revealed that the greatest benefits were realized among those who joined the program earliest. Children enrolled in preschool CPC received net benefits at age 26 totaling $83,708 per participant in 2007 dollars, compared with children who did not take part in the CPC program. When projected over a lifetime, economic benefits of the program, both to participants and society at large, amounted to nearly $11 for dollar spent, which corresponds to an 18 percent annual rate of return on the original investment.

Because the study did not assign children randomly to the two groups, it cannot prove conclusively that the CPC program resulted in the economic returns that the analysis revealed. However, the study results strongly suggest that the program produced lasting economic benefits — even for children who completed only part of it.

"These findings suggest that high-quality education programs focused on preschool through the elementary grades may produce long term benefits not only for the children enrolled, but for society as well," said Alan E. Guttmacher, M.D., director of the Eunice Kennedy Shriver National Institute of Child Health and Human Development (NICHD), the NIH institute that funded the study. "The findings also provide evidence that combining early education with job skills training and other instruction for parents also may increase benefits for children."

The analysis was conducted by Arthur J. Reynolds, Ph.D., Judy A. Temple, Ph.D., Barry A.B. White, M.A., and Suh-Ruu Oh, Ph.D., of the University of Minnesota, Minneapolis, and Dylan L. Robertson, Ph.D., of the Chicago Public Schools. Their findings appear in the January-February issue of Child Development.

Funded through Title I of the Elementary and Secondary Education Act, the CPC program is the second-oldest federally funded preschool program (after Head Start) and the oldest intervention providing co-located preschool-to-third-grade services. CPC facilities, located in or near elementary schools in poor Chicago neighborhoods, are staffed by certified teachers and offer instruction in reading and math, small group activities and educational field trips for children ages 3 through 9. The centers also provide meals and health screening. Center staff offer support services such as parenting or job skills training to parents and encourage them to volunteer in the classroom and to help supervise student field trips.

The researchers analyzed records for more than 1,500 children born in 1979 or 1980. Nearly 1,000 children started attending a CPC at age 3 or 4. The remaining children attended another program, or did not go to preschool. Ninety-three percent of the children in the study were African-American and 7 percent were Hispanic.

"The size of the study and the nature of the program suggest these results can be generalized to other settings," said James A. Griffin, Ph.D., who leads the Early Learning and School Readiness Program of the Child Development and Behavior Branch of the NICHD. "Although some evidence existed from other studies, these findings add significant weight to the idea that investing in early childhood education has returns for individuals and society."

High-quality instruction from well-qualified teachers, a high level of parental involvement, availability of family services and a low teacher-to-student ratio were particularly important to the success of the program, Dr. Reynolds explained.

Based on the percentage of students who graduated from high school or college, the researchers projected the earnings of children who attended CPCs by the time they turned 65, compared with students who were not enrolled in CPCs. The figures indicated that those who completed high school would make $277,000 more over their lifetimes than their counterparts who did not.

In addition to calculating the value of increased lifetime earnings, the researchers estimated the sum of taxes paid on these earnings. They also added the value of funds that were not spent for remedial education for students held back a grade; the cost of poor health, injury or treatment for depression; and costs for child welfare services or interaction with the judicial system. From these gains and savings, the researchers subtracted the cost of implementing the CPC program: employing teachers and other staff, providing support services, instructional materials and other supplies, and the cost of field trips.

For children enrolled in CPC for the shortest amount of time — beginning in first or second grade — lifetime benefits were about $4 for every dollar spent, a 10 percent annual return on the initial investment. For those with four to six years in the CPC program (this includes at least one year of preschool, kindergarten, and two or three years in elementary school), the researchers estimated an additional $37,357 of net benefits for each participant by age 26, compared with children enrolled in CPC for only one to three years. Over a lifetime, this represents a return of $8.24 for the participant, the participant’s family and society for every dollar spent on the program. The corresponding annual return on the initial investment was 18 percent.

"Children who were enrolled in the CPC program clearly demonstrated a significant return on the initial investment," said Dr. Reynolds. "These benefits appear to be derived from early gains made in the CPC program on school readiness, achievement, and parental involvement in the children’s schooling."

Further analysis of subsets of children indicated that the estimated benefits of attending CPCs for certain groups — boys, children living in neighborhoods with higher rates of poverty, and those from high-risk homes — were higher than for other children. For example, children from the highest poverty neighborhoods had returns four to 10 times higher than children living in less disadvantaged areas. Factors included in the evaluation of high-risk homes included parents’ age, income and educational level. 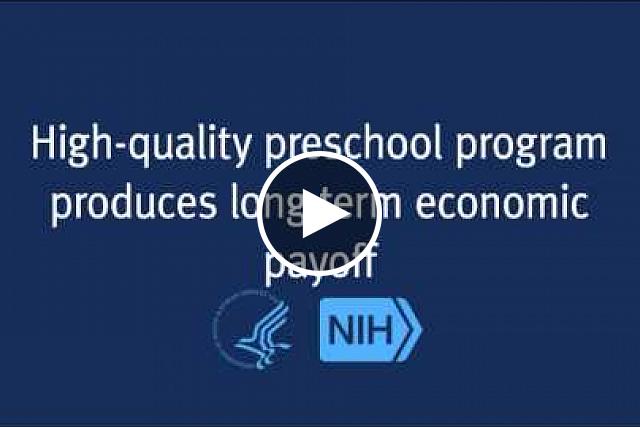 A cost-benefit analysis of early education finds $4 to $11 in benefits for every dollar spent on these programs.