An international effort to replace smoky, inefficient household stoves that people commonly use in lower and middle income countries with clean, affordable, fuel efficient stoves could save nearly 2 million lives each year, according to experts from the National Institutes of Health.

In a commentary in Science, the NIH scientists noted that indoor air pollution from such inefficient stoves affects about 3 billion people—nearly half the world's population. In addition to respiratory disease caused by smoke, the fuel needed by inefficient stoves leads to—deforestation, and environmental degradation.

"Many people in developed countries don't realize that smoke from indoor cooking fires is a terrible scourge upon the health of a large number of people," said Francis Collins, M.D., Ph.D, director of the National Institutes of Health and an author of the study. "International efforts to combat this scourge are now beginning. The NIH's role is to support the research that will determine the most efficient, cost effective means to do so while safe guarding human health."

The study authors stated that nearly half the world's population uses biomass (wood, crop residues, charcoal or dung) or coal as fuel for cooking and heating. "The primitive fires typically fill homes with dense smoke, blackening walls and ceilings and sickening those within."

Women and children are at greatest risk for the adverse health effects posed by inefficient stoves, the study authors wrote. Men tend to leave home during the day, but women and children remain. As a result, women and children have many of the same disease risks as do people who smoke tobacco. These risks include pneumonia, lung cancer and chronic obstructive pulmonary disease.

In many societies, women and girls typically gather fuel for the stoves. Fuel gathering is time-consuming and, because they must often walk several miles from the safety of their home communities, these women and girls are at increased risk for gender-based violence.

"By freeing up time, efficient stoves can even expand the opportunities for education and economic development of women and girls in these impoverished areas," the scientists wrote.

The study authors cited a recent report by the World Bank, which noted that, in addition to improving public health, clean, efficient stoves could have benefits to the environment and the climate, by reducing carbon dioxide emissions.

In recognition of the problem, the United Nations launched the Global Alliance for Clean Cookstoves. A public-private partnership, the alliance seeks to create a global market for clean and efficient cookstoves and fuels in the developing world. The alliance’s target is "100 by 20," which stands for the adoption of clean, efficient stoves and fuels by 100 million homes by the year 2020, with eventual worldwide adoption. The authors noted that the U.S. government has committed more than $50 million to the effort, including about $25 million in research funds for the NIH.

To succeed, strategies for replacing the world's inefficient biomass stoves with clean, efficient stoves must be market driven, the researchers added. So that cleaner stoves will be accepted, they must meet the needs of those who will use them.

"Promoting sustained changes in the way food is cooked to reduce [indoor air pollution] requires a fundamental understanding of traditions, social interactions, and family dynamics, which differ widely across cultures," the authors wrote. "Successful implementation invariably involves women in stove design, training, use in the home, and follow-up in the community."

Local manufacture of new stoves would have the added benefit of stimulating local economic development.

Educating people about the health risks of the stoves would also increase demand, as potential users understand that the initial expense of a more efficient stove would have health benefits in the long run, the authors wrote. Governmental subsidies to help the poorest people purchase the stoves would provide additional incentive, as would efforts to informal local peoples that the new stoves would cut household fuel costs.

The authors also called for more research on the potential health benefits of cleaner, more efficient stoves. It is not precisely known how much emissions must be reduced to produce health benefits. For example, preliminary data from one study suggest that reducing exposure to emissions by 90 percent is needed to substantially reduce the risk of pneumonia, and reducing exposure by 50 percent is required to modestly reduce the risk. Similarly, such studies could confirm the link between indoor air pollution and suspected health risks such as low birth weight, cataracts, cardiovascular disease, asthma, and tuberculosis.

The authors noted, however, that programs to replace inefficient stoves are already under way and that these programs have been undertaken without advance research into their potential benefits. Along with research to determine the amount of reduction in indoor air pollution needed to be effective, programs are also needed to evaluate the potential benefits of programs now under way.

The authors estimated the costs of a research program to on health and indoor air pollution to range from $150 million to $200 million. Although these costs might seem high, the authors wrote, they are typical of the costs of research investments needed to combat leading worldwide causes of death.

"The challenges are great, but the potential to use a relatively low cost intervention to save millions of lives, improve the environment, and encourage economic development is compelling," the researchers concluded.

Fogarty, the international component of the NIH, addresses global health challenges through innovative and collaborative research and training programs and supports and advances the NIH mission through international partnerships. For more information, visit: www.fic.nih.gov.

The National Institute of Environmental Health Sciences supports research to understand the effects of the environment on human health and is part of NIH. For more information on environmental health topics, visit our Web site at http://www.niehs.nih.gov.

About the Eunice Kennedy Shriver National Institute of Child Health and Human Development (NICHD): The NICHD sponsors research on development, before and after birth; maternal, child, and family health; reproductive biology and population issues; and medical rehabilitation. For more information, visit the Institute's Web site at http://www.nichd.nih.gov/. 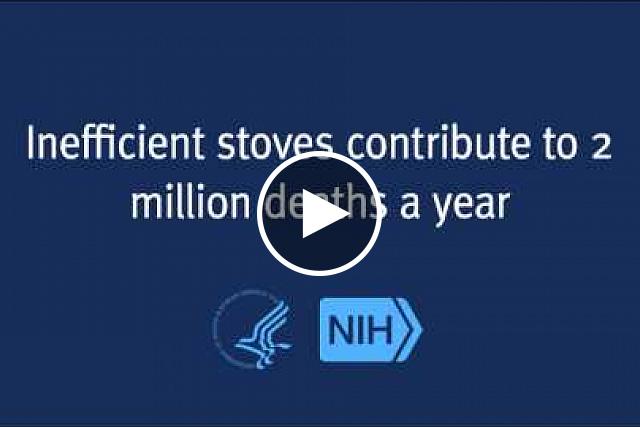 A team of NIH experts explain the impact of what the World Health Organization sites as the leading environmental cause of death worldwide.