Stroke patients who received intensive physical therapy improved their ability to walk just as well as those treated with a more complex rehabilitation program involving a body weight-supported treadmill.

In the largest stroke rehabilitation study ever conducted in the United States, stroke patients who had physical therapy at home improved their ability to walk just as well as those who were treated in a training program that requires the use of a body-weight supported treadmill device followed by walking practice.

The study, funded by the National Institutes of Health, also found that patients continued to improve up to one year after stroke, defying conventional wisdom that recovery occurs early and tops out at six months. In fact, even patients who started rehabilitation as late as six months after stroke were able to improve their walking.

The results of the study were announced today at the American Stroke Association’s International Stroke Conference 2011 in Los Angeles. NIH's National Institute of Neurological Disorders and Stroke (NINDS) provided primary funding for the study.

"More than 4 million stroke survivors experience difficulty walking. Rigorously comparing available physical therapy treatments is essential to determine which is best," said Walter Koroshetz, M.D., NINDS deputy director. "The results of this study show that the more expensive, high tech therapy was not superior to intensive home strength and balance training, but both were better than lower intensity physical therapy."

The walking program involves having a patient walk on a treadmill in a harness that provides partial body weight support. This form of rehabilitation, which is known as locomotor training, has become increasingly popular. After the patients complete their training on the treadmill, they practice walking.

Previous studies suggested that these devices, also called commercial lifts or robot-assisted treadmill steppers, are an effective intervention in helping stroke patients walk. But this walking program had not been tested on a large scale or examined in terms of the most appropriate timing for therapy.

The investigators of the Locomotor Experience Applied Post-Stroke (LEAPS) trial set out to compare the effectiveness of the body-weight supported treadmill training with walking practice started at two different stages--two months post-stroke (early locomotor training) and six months post-stroke (late locomotor training). The locomotor training was also compared against a home exercise program managed by a physical therapist, aimed at enhancing patients' flexibility, range of motion, strength and balance as a way to improve their walking. The primary measure was each group’s improvement in walking at one year after the stroke.

The investigators had hypothesized that the body-weight supported treadmill and walking program, especially early locomotor training, would be superior to a home exercise program. However, they found that all groups did equally well, achieving similar gains in walking speed, motor recovery, balance, social participation and quality of life.

At the end of one year, 52 percent of all the study participants had made significant improvements in their ability to walk. The timing of the locomotor training program did not seem to matter. At one year, no differences were found in the proportion of patients who improved walking with the early or late treadmill training program, nor did the severity of their stroke affect their ability to make progress by the end of the year.

The patients' measure of improvement was based on how well they were able to walk independently by the end of the study period. For example, severely impaired stroke patients were considered improved when they were able to walk around inside the house, whereas the patients who were already mobile at home were considered improved when they could progress to walking independently in the community. All groups achieved similar gains in the speed and distance of their walking, their physical mobility, motor recovery and social participation, resulting in an improved quality of life.

All study participants started out with usual care, which involved a variable number of physical therapy sessions of about an hour each, before they were assigned to one of the study groups. The study found that earlier was better when it comes to rehabilitation therapy. The patients who were not assigned to a study group until six months after their stroke recovered only about half as much as the participants who received one of the two therapy programs at two months. This finding suggests that either the treadmill training program or the at-home sessions are effective forms of physical therapy, and both are superior to usual care.

The patients in the body-weight supported treadmill and walking program group that started at six months made significant improvements in walking speed, despite the widely held assumptions and reports that most functional improvements after stroke are complete by six months. The researchers said this suggests that recovery beyond six months can be influenced by further therapy. Individuals in the locomotor training groups were more likely to feel faint and dizzy during the exercise, and those who received early locomotor training experienced more falls. Fifty-seven percent of participants experienced one fall, 34 percent had multiple falls and 6 percent had a fall resulting in injury. Falls are a common problem among stroke survivors, and the investigators say this study builds on evidence that additional research is needed to prevent falls.

The at-home group was the most likely to stick with the program; only 3 percent dropped out of this arm of the study, compared to 13 percent of the locomotor training groups. The authors noted that the physical therapy training programs in the study were progressive, intensive, and repetitive, and were highly effective in improving functional status and levels of walking ability, and quality of life at one year post-stroke.

"We were pleased to see that stroke patients who had a home physical therapy exercise program improved just as well as those who did the locomotor training," said Pamela W. Duncan, Ph.D., principal investigator of LEAPS, and professor at Duke University School of Medicine in Durham, N.C. "The home physical therapy program is more convenient and pragmatic. Usual care should incorporate more intensive exercise programs that are easily accessible to patients to improve walking, function and quality of life."

The home exercise programs require less expensive equipment, less training for the therapists and fewer clinical staff members. The LEAPS authors suggest that this intervention may help keep stroke survivors active in their own homes and community environments. More than 400 patients were randomly assigned into the three study groups and participated in 36 90-minute sessions over 12 to 16 weeks. They had either severe or moderate walking impairments. The average age of the patients was 62 years. Fifty-four percent were men and 22 percent were black. The trial took place at six inpatient rehabilitation centers including Brooks Rehabilitation Hospital in Jacksonville, FL; Florida Hospital in Orlando; Long Beach Memorial Hospital in Long Beach, CA; and Sharp Rehabilitation Center in San Diego, CA.

The study was funded primarily by NINDS with additional support by the National Center for Medical Rehabilitation Research. Recruitment for the study began in April 2006 and the study was completed in June 2009.

NINDS (www.ninds.nih.gov) is the nation's leading funder of research on the brain and nervous system. The NINDS mission is to reduce the burden of neurological disease – a burden borne by every age group, by every segment of society, by people all over the world. 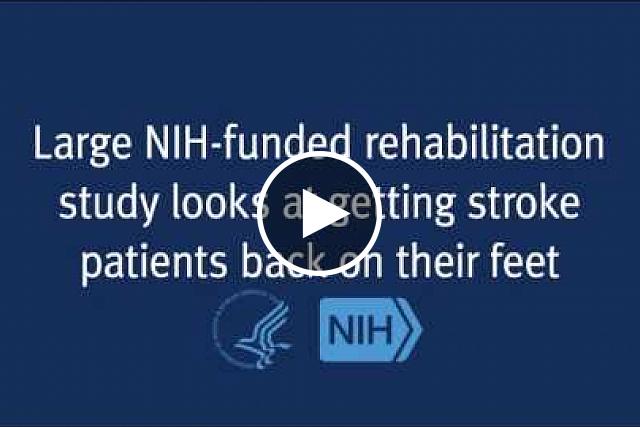 New research compares physical therapy options for stroke survivors. Stroke patients who had intense physical therapy at home improved their ability to walk just as much as those in a training program with a treadmill device. The study also shows that stroke patients can continue to improve up to one year after stroke, offering new hope to patients and their families.