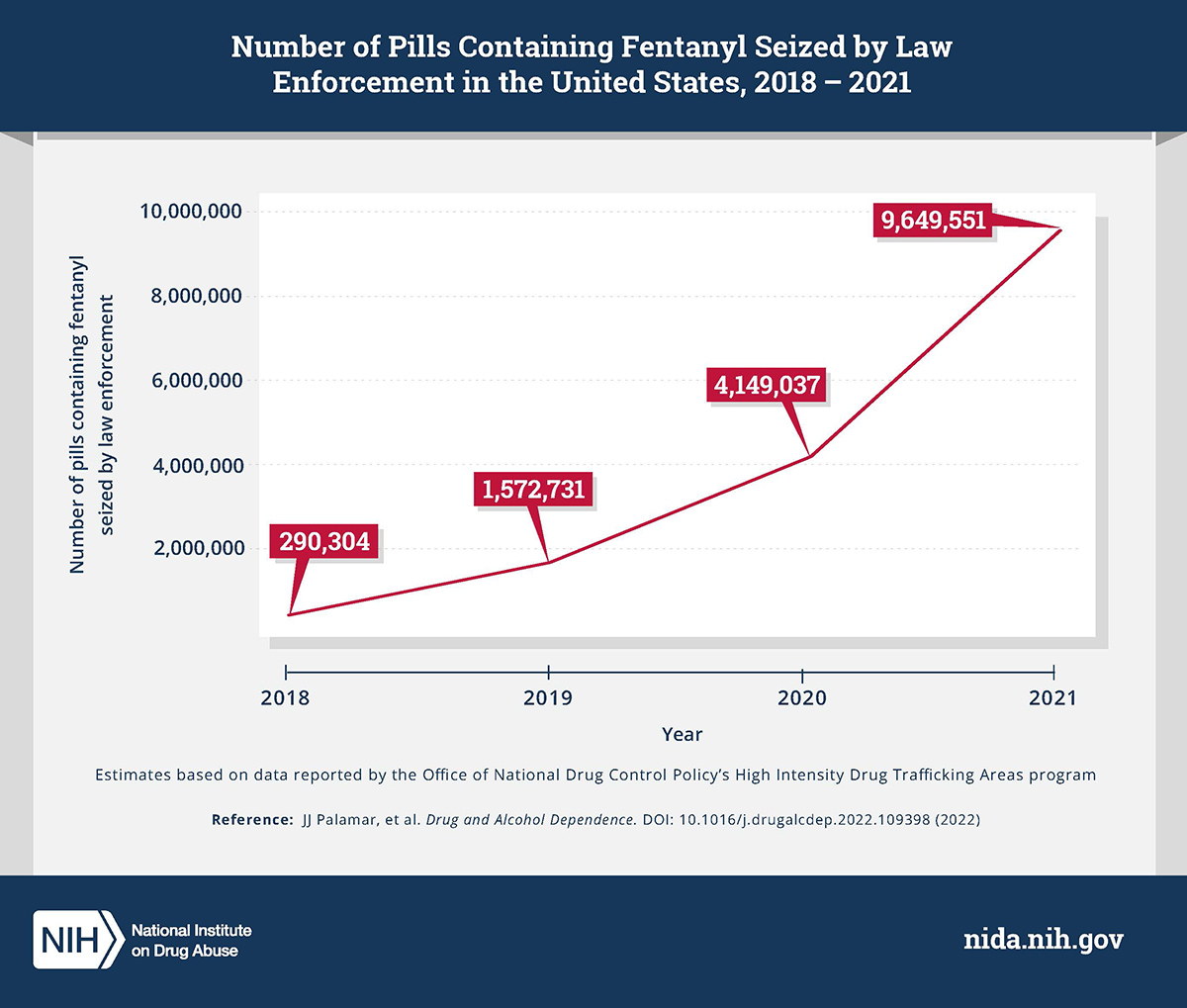 Law enforcement seizures of pills containing illicit fentanyl increased dramatically between January 2018 and December 2021, according to a new study. The number of individual pills seized by law enforcement increased nearly 50-fold from the first quarter of 2018 to the last quarter of 2021 and the proportion of pills to total seizures more than doubled, with pills representing over a quarter of illicit fentanyl seizures by the end of 2021. The study also found an increase in the number of fentanyl-containing powder seizures during this time.

This study was published today in Drug and Alcohol Dependence and funded by the National Institute on Drug Abuse (NIDA), part of the National Institutes of Health. According to the most recent Centers for Disease Control and Prevention data, the United States hit a record high in the number of overdose deaths ever recorded, estimating that nearly 106,000 people died from drug overdoses in the 12-month period ending in October 2021. This rise is largely driven by illicit fentanyl and other synthetic opioids.

Illicit fentanyl is highly potent, cheaply made and easily transported, making it a profitable narcotic. While people may seek out illicit fentanyl intentionally, many people are not aware that the drug they are using – including heroin, cocaine, methamphetamine, or benzodiazepines – may actually be fentanyl, or has been adulterated or contaminated with fentanyl. Because fentanyl is about 50 times more potent than heroin and a lethal dose may be as small as two milligrams, using a drug that has been laced with fentanyl can greatly increase overdose risk.

“An increase in illicit pills containing fentanyl points to a new and increasingly dangerous period in the United States,” said NIDA Director Nora D. Volkow, M.D. “Pills are often taken or snorted by people who are more naïve to drug use, and who have lower tolerances. When a pill is contaminated with fentanyl, as is now often the case, poisoning can easily occur.”

Illicitly manufactured powder fentanyl has been a known adulterant in drugs since 2013, but the extent that fentanyl is found in counterfeit pills has been largely unknown. To address this question, a team led by Joseph J. Palamar, Ph.D., M.P.H., associate professor at the NYU Grossman School of Medicine and co-investigator on the NIDA-funded National Drug Early Warning System (NDEWS), analyzed data on drug seizures by law enforcement. The data were collected between January of 2018 and December of 2021 from the High Intensity Drug Trafficking Areas (HIDTA) program, a grant program aimed at reducing drug trafficking and misuse administered by the Office of National Drug Control Policy in which the Drug Enforcement Administration and the CDC play an active role.

Unlike most survey data and surveillance systems which can be lagged for a year or more, HIDTA data are made available quarterly, allowing evaluation in almost real time. HIDTA also distinguish between the presence of fentanyl in pill or powder form. Analyzing these data can therefore help identify trends in availability of illicit substances and act as a type of early warning system to shift public health education or interventional resources more quickly.

HIDTA data does not differentiate between fentanyl and its analogs, nor estimate the amount of fentanyl present in seized substances; however, given the small amount necessary for an overdose, the authors note that the presence of any fentanyl is an important indicator of overdose risk. People who purchase counterfeit drugs, such as illicit oxycodone, hydrocodone, or benzodiazepines may be at risk for unintentional exposure to fentanyl, which is associated with increased risk of overdose death. Further, people who use these types of pills are less likely to have a tolerance built to opioids, and when coupled with the sedative effects of non-fentanyl opioids or benzodiazepines, may further increase risk of overdose and death.

“For the first time we can see this rapid rise in pills adulterated with fentanyl, which raises red flags for increasing risk of harm in a population that is possibly less experienced with opioids,” said Dr. Palamar. “We absolutely need more harm reduction strategies, such as naloxone distribution and fentanyl test strips, as well as widespread education about the risk of pills that are not coming from a pharmacy. The immediate message here is that pills illegally obtained can contain fentanyl.”

The researchers emphasize that drug seizure rates are not direct measures of actual drug availability. However, the increase in fentanyl-related drug seizures coincides with increasing synthetic opioid-related overdose death rates. These data also corroborate data from the DEA National Forensic Laboratory Information System showing a steady increase in fentanyl seizures in recent years, even across the earlier parts of the COVID-19 pandemic. For additional NDEWS research and reports, visit https://ndews.org.

“To address the overdose crisis, you need real-time, high-quality drug surveillance data to inform the public health response,” said Linda B. Cottler, Ph.D., M.P.H, principal investigator of NDEWS, and last author on the paper. “Through collecting and sharing data on drug use trends as we do through our NIDA-funded NDEWS, we aim to guide strategies to curb the overdose crisis of today, while also keeping our eye on the horizon to prepare for the problems of tomorrow.”

About the National Institute on Drug Abuse (NIDA): NIDA is a component of the National Institutes of Health, U.S. Department of Health and Human Services. NIDA supports most of the world’s research on the health aspects of drug use and addiction. The Institute carries out a large variety of programs to inform policy, improve practice, and advance addiction science. For more information about NIDA and its programs, visit https://www.nida.nih.gov.