Researchers at Northwestern University Feinberg School of Medicine have identified in mice a previously unknown protective mechanism by which the smallest blood vessels remove blood clots and other blockages from the brain. The findings provide insights into mechanisms that may be involved in age-related cognitive decline, Alzheimer’s disease and recovery from stroke.

Uninterrupted blood flow is critical for brain function, and the brain has developed various mechanisms to maintain it. Blockages in the smallest blood vessels can be cleared by processes that disintegrate or wash them out. However, not all blockages are cleared completely. Persistent blockage can reduce or stop blood flow, limiting the supply of oxygen and nutrients to the surrounding tissue and nerve cells. This, in turn, can lead to impaired communications between nerve cells and ultimately cell death.

The researchers used a newly developed imaging technique that can view the smallest blood vessels, known as microvessels, in the brains of living mice. They found that two to seven days after a blockage in brain microvessels, the cells lining the blood vessel wall engulf the remaining portion of the blockage, encapsulate it, seal it off from the interior of the blood vessel and finally expel the blocking material outside of the vessel. As a result of this process, blood flow is restored to the affected area. (See graphic below.)

"These are intriguing findings," said NIA Director Richard J. Hodes, M.D. "They open new avenues of basic research that may increase our understanding of how microvessels are maintained in the brain and throughout the body."

The research team demonstrated that this complex protective mechanism involves the activity of an enzyme, matrix metalloprotease 2/9, which breaks down large proteins and is known to play a role in blood vessel development and in stroke.

The researchers also found that the ability to move the blockage out of the blood vessel diminished with age. Young mice (age 4 months) were able to clear blockages more quickly and thoroughly than older mice (age 22 months). The incomplete removal of blockages in the brains of older mice led to a prolonged shortage of oxygen to the surrounding nerve cells and damaged the connections between nerve cells in the vicinity of the obstructed blood vessels.

"The reduced efficiency of this protective mechanism in the older brain and its effect on the function of nerve cells in the brain may significantly contribute to age-related cognitive decline," said Suzana Petanceska, Ph.D., of the Neurobiology of Aging Branch in NIA's Division of Neuroscience, which funded the research. "This may also be part of the mechanism by which vascular risk factors such as high blood pressure and diabetes increase the risk of Alzheimer's disease with age."

The NIA leads the federal effort supporting and conducting research on aging and the medical, social and behavioral issues of older people. For more information on research and aging, go to www.nia.nih.gov. 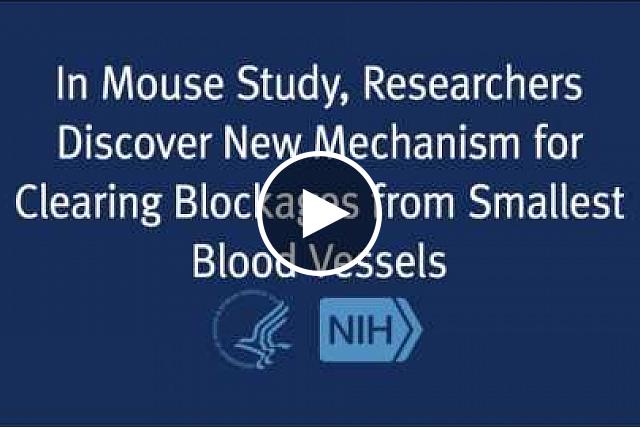 Researchers have identified in mice a previously unknown protective mechanism by which the smallest blood vessels remove blood clots and other blockages from the brain. The findings provide insights into mechanisms that may be involved in age-related cognitive decline, Alzheimer's disease and recovery from stroke.