As the school year begins, the National Institute on Drug Abuse (NIDA) encourages educators, community groups and parents to begin planning events for the fourth annual National Drug Facts Week in the last week of January. Hundreds of educational events are expected around the country to connect teens with scientific experts in the drug abuse field. The observance coordinated by NIDA, part of the National Institutes of Health, begins Jan. 27 and ends Feb. 2, 2014.

National Drug Facts Week encourages and stimulates community-based events where teens ask questions of addiction scientists or health experts. Events can be sponsored by a variety of organizations, including schools, community groups, sports clubs, and hospitals. Topics for discussion include the science behind illicit drug use, prescription drug abuse, and use of alcohol and tobacco. Event holders who register will receive free booklets with science-based facts about drugs, designed specifically for teens. The event registration site is http://drugfactsweek.drugabuse.gov.

“All over the country, communities have been asking for non-judgmental information about drugs that will engage teens,” said NIDA Director Dr. Nora D. Volkow. “This week-long observance gives us an opportunity to come together as a nation for one week to focus on the science behind drugs and clarify many myths about addiction fostered by our popular culture.”

NIDA provides an online toolkit that advises teens and their adult advisors how to create an event, publicize it, find an expert, and obtain scientific information on drugs. NIDA supports event holders by offering its popular teen booklet, Drugs: Shatter the Myths, free of charge as well as the online 2014 National Drug IQ Challenge, a 10-question multiple choice quiz that teens and adults can take to test their knowledge about drugs.

National Drug Facts Week is being supported by many federal agencies, including the White House Office of National Drug Control Policy (ONDCP); the National Institute on Alcohol Abuse and Alcoholism at NIH; the Office of Safe and Healthy Students in the U.S. Department of Education; the Substance Abuse and Mental Health Services Administration; and the Drug Enforcement Administration (DEA) in the U.S. Department of Justice. Each agency will post National Drug Facts Week information on its website and encourage the development of special events linking experts to teens.

“President Obama has outlined his vision of an America that is built to last — where our children are educated and healthy,” said ONDCP Director Gil Kerlikowske. “This administration’s drug policy is guided by neuroscience, and we are committed to using research to inform young people about the risks and consequences of substance use, including the negative impact it can have on their futures.”

The Office of Safe and Healthy Students will help promote National Drug Facts Week and encourage schools to participate. “We know there is a need to actively engage youth in an open dialogue about illicit drug use, and emerging threats like synthetic drugs,” said David Esquith, director of the Office of Safe and Healthy Students. “National Drug Facts Week provides a platform for this to happen.”

DEA will again share in efforts to encourage community-based events. “One way to help young people stay drug free is to have an honest exchange with them about the dangers of drug use,” said DEA Administrator Michele M. Leonhart. “National Drug Facts Week does just that – it opens a dialogue that gives youth the facts about drugs. We are proud to support NIDA’s efforts to communicate directly with our youth across America so that they have the tools to make informed choices about drug use.”

Also during National Drug Facts Week, NIDA scientists will hold their annual Web chat with teens around the country. Drug Facts Chat Day will be held Jan. 28 from 8 a.m. to 6 p.m. EST. Further details on the popular annual chat, including registration information and transcripts from previous years, can be found at http://drugfactsweek.drugabuse.gov/chat.

Organizations wishing to hold events can email NIDA at drugfacts@nida.nih.gov. 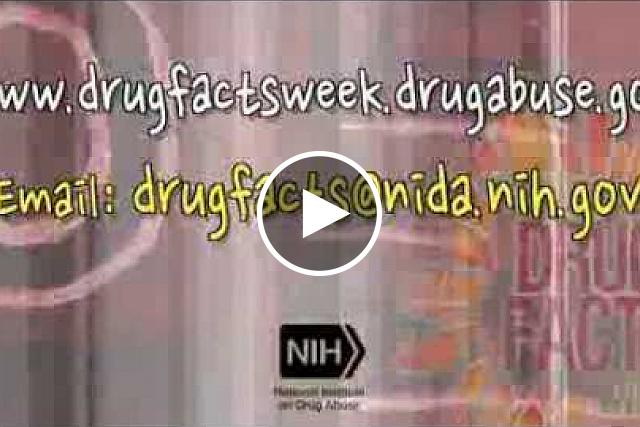