National Drug Facts Week, which brings together teens and scientific experts to shatter persistent myths about drug use and addiction, will be held Jan. 26 through Feb. 1, 2015. Ideas for community-based events, as well as success stories from previous years, are highlighted on the National Drug Facts Week Web portal.

“National Drug Facts Week has been growing every year, from 92 events at its inception almost five years ago,” said NIDA Director Dr. Nora D. Volkow. “This tells us how much teens — who are bombarded daily with misinformation about drugs — want science-based facts about drug use.”

National Drug Facts Week was launched in 2010 to counteract the myths that teens often hear from the Internet, TV, movies, music, or friends. One popular myth is that marijuana is harmless, although science tells us that marijuana use by teens may negatively affect brain development and impair school and athletic performance. Teen use of marijuana is up compared to five years ago, perhaps because fewer teens consider marijuana to be a harmful drug.

To help shatter the myths surrounding marijuana and other addictive substances, National Drug Facts Week encourages events that allow teens to ask questions of addiction scientists or health experts about drug use and addiction. Events can be sponsored by a variety of organizations, including schools, community groups, sports clubs, and hospitals. Topics for discussion can include not only what science tells us about marijuana, but also about prescription drug abuse, and the use of tobacco and alcohol.

NIDA provides an online toolkit that advises teens and their adult advisors how to create an event, publicize it, find an expert, and obtain scientific information on drugs. This year, NIDA has merged its National Drug Facts Week website with its popular NIDA for Teens site, http://teens.drugabuse.gov/national-drug-facts-week. This will enable easier browsing between event planning tools and NIDA’s drug information fact sheets, which are designed with teen-friendly language and graphics. Event holders who register online will receive free booklets with science-based facts about drugs, including one of NIDA’s most in-demand teen publications, Drugs: Shatter the Myths. Also this year, NIDA offers three interactive tools that can be projected on large screens at events or used with mobile devices:

“President Obama’s vision is for all of America’s children to grow up in healthy and safe communities,” said ONDCP Acting Director Michael Botticelli. “This administration’s drug policy is based on neuroscience, and we are committed to informing young people and health care professionals about the negative consequences drug and alcohol use can have on their futures.”

The Office of Safe and Healthy Students will help promote National Drug Facts Week and encourage schools to participate. “National Drug Facts Week allows NIDA staff to connect directly with youth and to share facts on drug use in a direct, evidence-based, and non-judgmental fashion,” said David Esquith, director of the Office of Safe and Healthy Students. “Once again, our office is pleased to help promote this week’s activities and to encourage schools to participate.”

DEA will again share in efforts to encourage community-based events. “National Drug Facts Week provides a unique opportunity to discuss drug abuse, relevant science, and the dangers of addiction. DEA is proud to encourage community-based events that engage teens in a dialogue about drugs,” said DEA Administrator Michele M. Leonhart. “Having an honest and open discussion about the dangers of drug abuse is a significant first step in drug prevention. We are pleased to support NIDA’s efforts to help youth make informed choices.”

Also during National Drug Facts Week, NIDA scientists will hold their annual Web chat with teens around the country. Drug Facts Chat Day will be held Jan. 30 from 8 a.m. to 6 p.m. Eastern time. Further details on the popular annual chat, including registration information and transcripts from previous years, can be found at http://teens.drugabuse.gov/national-drug-facts-week/chat-with-scientists. 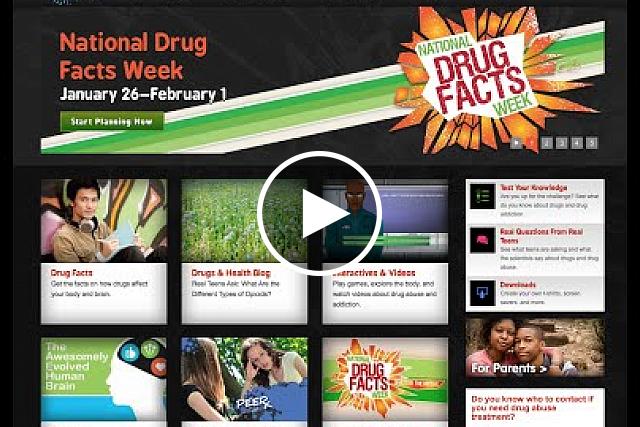