Colonoscopy; shows colonoscope inserted through the anus and rectum and into the colon. Inset shows patient on table having a colonoscopy.NCI

Higher rates of colorectal cancer incidence and mortality experienced by African-Americans may be driven largely by differences in health care utilization, and less by biology, according to a new study led by researchers from the National Cancer Institute (NCI), part of the National Institutes of Health.

In a study involving more than 60,000 people who were screened for colorectal cancer, researchers found that blacks and whites were equally likely to need a follow-up colonoscopy after a screening sigmoidoscopy, but blacks were less likely to actually receive the follow-up.

Lower rates of follow-up could lead to delayed diagnosis and treatment and higher mortality. The results of this study were published online April 6, 2010, in the Journal of National Cancer Institute (JNCI) and will appear in the April 21, 2010, print edition.

"Our research suggests that the biology of colorectal cancer may not differ by race, at least in the early stages of tumor development," said author Adeyinka O. Laiyemo, M.D., M.P.H., from NCI’s Division of Cancer Prevention. "Instead, health care utilization differences among races may play a more important role in colorectal cancer disparities."

Participants in this study were part of the ongoing Prostate, Lung, Colorectal, and Ovarian Cancer Screening Trial (PLCO), a multi-center, randomized, controlled screening trial designed to evaluate the effect of screening on cancer mortality. At the start of the colorectal cancer part of the study, participants were offered a screening flexible sigmoidoscopy, which is used to examine the lower, or sigmoid, portion of the colon. Subjects who had polyps or lesions detected during the sigmoidoscopy were referred to their personal physician for follow-up colonoscopy, the cost of which was not covered by the study.

Sigmoidoscopy; shows sigmoidoscope inserted through the anus and rectum and into the sigmoid colon. Inset shows patient on table having a sigmoidoscopy.NCI

In a colonoscopy, the entire colon, which is about five feet in length, is examined. During a sigmoidoscopy, only about the last two feet of the colon closest to the rectum is viewed. The records of the follow-up colonoscopies were collected and reviewed to determine which subjects had received them. Those results were analyzed to determine whether utilization of follow-up colonoscopy and likelihood of adenomas (pre-cancerous lesions) or colorectal cancer varied by race. In their analysis, to reduce the possibility that other factors were influencing the outcome of the study, the researchers documented age, education, sex, body mass index, smoking, family history of colorectal cancer, colon cancer screening within the previous three years, personal history of polyps, and center where the participant was screened.

Of the 60,572 study participants who received flexible sigmoidoscopy (57,561 whites and 3,011 blacks) at the start of the study, 23.9 percent of the white participants and 25.5 percent of the black participants had abnormal results, such as polyps or lesions. Among those with abnormal results, 72.4 percent of whites and 62.6 percent of blacks received a follow-up colonoscopy to determine whether cancer was present. The researchers found no statistically significant differences in the presence of adenomas, advanced adenomas, or cancer by race. It should be noted, however, that black participants were more likely to have cancer in the upper part of the colon, which would not be viewed during a sigmoidoscopy.

Overall, a total of 156 colorectal cancers were diagnosed among the participants who received a follow-up colonoscopy. Most of the cancers (75.6 percent) were stage I or II tumors, which are considered early stage disease. There was no statistically significant difference in the risk of colorectal cancer by race.

The reasons behind the lower follow-up rates among black men and women in this study are unknown. It is possible that lower socioeconomic status may have affected health care utilization due to the direct and indirect costs of care, such as copays and lost wages. Although the authors did not have direct information on the socioeconomic status of study participants, the overall educational level — an indicator of socioeconomic status — was lower in black participants than white participants. In addition, the need for multiple tests, including colonoscopy, following abnormal results of a screening sigmoidoscopy, and the cost and preparation required for those tests, could have deterred some people from receiving follow-up colonoscopies. Finally, a lack of knowledge about cancer prevention among patients and a lack of cultural competence on the part of the health care providers could be barriers to health care utilization.

When the authors analyzed the rate of follow-up colonoscopies by educational attainment, they observed differences at all educational levels, but the differences were only statistically significant among participants with a high school education or less. Because black participants in the PLCO study were, on average, more educated and health conscious than comparable members of the general population, the authors state that it is possible that their findings of lower health care utilization among blacks may actually be an underestimation of what would be seen in the general population.

"This research suggests that targeting interventions toward increasing the use of screening among minority populations might go a long way toward reducing disparities in colorectal cancer," said senior author Christine Berg, M.D., from the Early Detection Research Group in the NCI’s Division of Cancer Prevention.

NCI leads the National Cancer Program and the NIH effort to dramatically reduce the burden of cancer and improve the lives of cancer patients and their families, through research into prevention and cancer biology, the development of new interventions, and the training and mentoring of new researchers. For more information about cancer, please visit the NCI Web site at http://www.cancer.gov or call NCI's Cancer Information Service at 1-800-4-CANCER (1-800-422-6237). 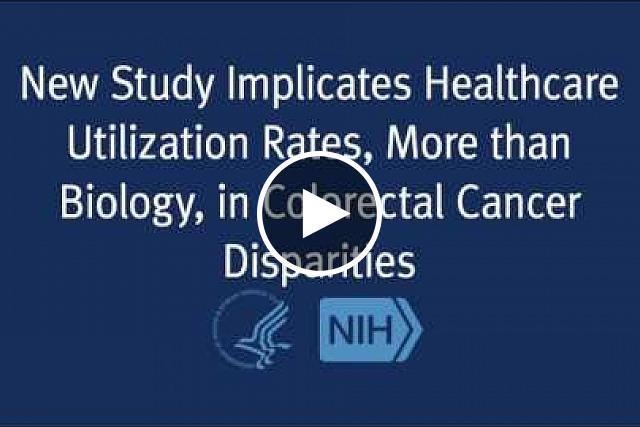 Higher rates of colorectal cancer incidence and mortality experienced by African-Americans may be driven largely by differences in health care utilization, and less by biology, according to a new study led by researchers from the National Cancer Institute (NCI), part of the National Institutes of Health.