Infants born with a severely underdeveloped heart who undergo a newer surgical procedure are more likely to survive their first year and not require a heart transplant than those who have a more traditional surgical procedure, according to a report by researchers supported by the National Heart, Lung, and Blood Institute (NHLBI), which is part of the National Institutes of Health. The study of 549 newborns, however, suggests that after the first year, the two surgical procedures for the relatively rare condition yield similar results.

The Single Ventricle Reconstruction (SVR) Trial is the largest clinical trial to compare treatments for congenital heart disease, and the first North American, multi-center, randomized trial of surgical therapy for congenital heart disease patients. Results are published in the May 27, 2010, issue of the New England Journal of Medicine. An editorial accompanies the article.

Congenital heart disease is the most common birth defect. Every year, about 1 percent of babies are born with abnormally formed hearts. The normal heart has two pumping chambers called ventricles. The right ventricle pumps blood to the lungs, and the left ventricle pumps blood to the body. This trial studied babies born with a severe form of congenital heart disease in which babies are born with a functioning right ventricle and a small, underdeveloped, nonfunctioning left ventricle. The condition is sometimes referred to as hypoplastic left heart syndrome. Without treatment, these babies usually die shortly after birth.

The SVR Trial compared for the first time two surgical procedures that are commonly used to treat babies born with only the functioning right ventricle to determine whether one procedure improves outcomes more than the other. The SVR Trial was conducted at 15 North American clinical sites that are part of the NHLBI’s Pediatric Heart Network.

"Rigorous comparison of patient outcomes is critical to fully understanding the risks and benefits of different interventions," said NHLBI Acting Director Susan B. Shurin, M.D., a board-certified pediatrician. "To conduct meaningful clinical research on rare conditions, however, we need collaboration among multiple study sites. This study demonstrates that through consortia such as the NHLBI’s Pediatric Heart Network, we can accelerate our ability to provide needed evidence on the best ways to care for some of our most vulnerable patients."

In general, three surgeries are needed to treat a single right ventricle. The first procedure, called the Norwood procedure, is usually performed within the first two weeks of life and is one of the highest risk procedures in congenital heart surgery. A shunt, or small tube, is implanted to provide a connection for blood to flow from the heart to the blood vessels in the lungs, or pulmonary arteries, so that blood can pick up oxygen and release carbon dioxide. Children later undergo a second surgery at 4 to 6 months of age, and a third procedure, known as the Fontan procedure, at 18 to 36 months. The operations are staged to allow the child to grow large enough that the corrective procedures can be performed. Heart transplantation may be required for children with single ventricles when surgery and other treatments fail.

In the SVR trial, participants were randomly assigned shortly after birth to receive one of two types of shunts for their initial surgery, as part of the Norwood procedure. About half of the newborn participants received a modified Blalock-Taussig (MBT) shunt, the traditional approach, which places the shunt from a branch off of the aorta, the major blood vessel that takes blood from the heart to the rest of the body, to the pulmonary artery. The other participants received a newer type of shunt, called an RVPA shunt, which is placed between the right ventricle and the pulmonary arteries.

Each type of shunt has advantages and disadvantages. A few small studies of the RVPA shunt have suggested that it provides better survival and other outcomes than the MBT shunt. However, randomized clinical trials have not been conducted to demonstrate whether one procedure is better than the other.

Researchers followed all study patients for at least 14 months. They evaluated the number of deaths and heart transplantations in each group at one year, as well as the number of complications linked to each type of shunt.

"We found that the right ventricle-to-pulmonary artery shunt improved the chances of being alive without a heart transplant one year after surgery. However, the benefit appears to be limited to the first 12 months, as the two shunts showed similar results after about two years," said Richard G. Ohye, M.D., head, Pediatric Cardiovascular Surgery Division, University of Michigan, Ann Arbor, and lead author of the study.

"We are continuing to follow these children, and this longer follow-up will be important to determine which shunt is truly superior in the long run," Ohye added. A follow-up study is analyzing the effects of the procedures in children 2 to 6 years of age.

The researchers report that after 12 months, 74 percent of infants with the RVPA shunt survived and didn’t need a heart transplant, compared to 64 percent of infants with the MBT shunt. The newborns with the RVPA shunt, however, had significantly more complications requiring additional interventions, for example, insertions of stents or balloons to keep the shunt open. Other outcomes, such as the size and pumping ability of the right ventricle at 14 months, were similar in the two groups of participants.

In a preliminary analysis of participants after an average follow up of 32 months, researchers found similar outcomes in the group of participants with the RVPA shunt compared to the MBT shunt.

"This study shows great promise for helping not only this high-risk group of patients, but also for improving the health and well being of many more babies and children with heart problems," noted Gail D. Pearson, M.D., Sc.D., a pediatric cardiologist, director of the NHLBI Adult and Pediatric Cardiac Research Program, and a coauthor of the paper.

The Pediatric Heart Network (PHN) is a multi-center clinical research consortium supported by the NHLBI since 2001 to study congenital and acquired heart diseases that occur in childhood. The PHN also provides training in clinical research to young investigators, and is the clinical cornerstone of the NHLBI's comprehensive Bench to Bassinet program in translational pediatric cardiovascular research.

To interview Dr. Gail Pearson, the NHLBI SVR spokesperson, please contact the NHLBI Communications Office at (301) 496-4236 or e-mail nhlbi_news@nhlbi.nih.gov. To speak with Dr. Ohye, please contact Dr. Ohye's assistant, Sandy Hall at (734) 936-4978 or e-mail ohye@umich.edu. To speak with Dr. Lynn Mahony, the chair of the PHN, professor of pediatrics, University of Texas Southwestern Medical Center, and a coauthor of the paper, please call (214) 456-2325.

Part of the NIH, the National Heart, Lung, and Blood Institute (NHLBI) plans, conducts, and supports research related to the causes, prevention, diagnosis, and treatment of heart, blood vessel, lung, and blood diseases; and sleep disorders. The Institute also administers national health education campaigns on women and heart disease, healthy weight for children, and other topics. NHLBI press releases and other materials are available online at www.nhlbi.nih.gov.

Further information about this trial (NCT00115934) can be found at http://www.clinicaltrials.gov/.

How the Heart Works: http://www.nhlbi.nih.gov/health/dci/Diseases/hhw/hhw_whatis.html

The Children and Clinical Studies website, providing accessible information in English and Spanish about participating in clinical research to families and healthcare providers: http://www.nhlbi.nih.gov/childrenandclinicalstudies/index.php. 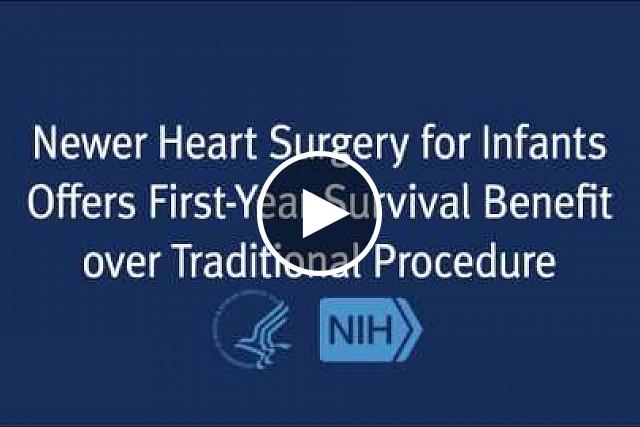 Infants born with a severely underdeveloped heart who undergo a newer surgical procedure are more likely to survive their first year and not require a heart transplant than those who have a more traditional surgical procedure, according to a report by researchers supported by the National Heart, Lung, and Blood Institute (NHLBI). The study is the largest comparative effectiveness study for congenital heart disease and the first North American multi-center randomized trial of congenital heart disease.