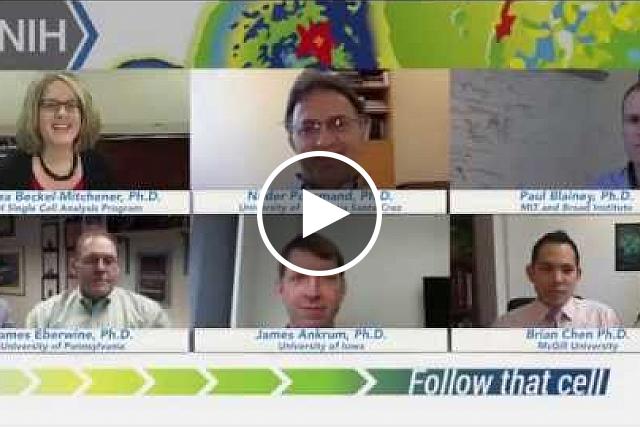 The National Institutes of Health has named two biological engineering researchers as winners in Phase 2 of its Follow that Cell Challenge. The winners will share $400,000 in prizes awarded for development of new tools and methods for predicting the behavior and function of a single cell in complex tissue over time – and how that reflects the health of the tissue. They were chosen from among several Phase 1 finalists.

Nader Pourmand, Ph.D., University of California Santa Cruz, is the first place winner with a prize of $300,000. A team led by Paul Blainey, Ph.D., of the Broad Institute, Cambridge, Massachusetts, will share the second place prize of $100,000.

Pourmand developed an advanced “nanopipette” technology with such a fine tip that it makes it possible to non-invasively sample tiny amounts of intracellular material to measure biochemical changes, multiple times in the same cell – without disturbing its function. Coupled with parallel development of “nanogenomics” technology, this will enable scientists to track molecular changes in cells that develop in response to treatments, such as the development of drug resistance in cancer.

“This is the only technology I know of that enables us to repeatedly interrogate a single cell without killing it,” said Pourmand.

Blainey’s team designed a new molecular technology to streamline cellular analysis and allow for wide adoption by labs. Instead of requiring complex physical sampling of cellular components, it takes advantage of cell secretion pathways to access molecules of interest inside the cell -- at multiple time points. Blainey’s findings demonstrated the ability of a cell to “self-report” gene expression.

Both prize winners will be recognized – and give short presentations on their solutions – as part of the 5th Annual Single Cell Analysis Investigators Meeting, on June 29-30, 2017 at Masur Auditorium on the NIH Campus in Bethesda, Maryland.

Launched in August of 2014, Follow that Cell seeks to incentivize innovation by awarding prizes based on completed work, in contrast to NIH’s traditional, prospective grant and contract mechanisms, which provide funding in advance.

The challenge is aimed at finding new ways to learn how cells transition from a healthy to a diseased state, become responsive to treatment, and offer opportunities for early detection and precision medicine. Under the auspices of the America COMPETES Act, it targeted a broader range of innovators than typically seek NIH funding. For example, its promotion included a video by then NIMH director Thomas Insel, M.D.

“By using the prize mechanism, the NIH pays only for projects that achieve the program’s objectives. It de-risks an inherently risky goal,” said James M. Anderson, M.D., Ph.D., director of NIH’s Division of Program Coordination, Planning and Strategic Initiatives (DPCPSI), which harbors the NIH Common Fund, whose Single Cell Analysis Program sponsored the challenge, with additional leadership provided by the National Institute of Mental Health (NIMH) and the National Institute of Biomedical Imaging and Bioengineering (NIBIB).

In March of 2015, NIH announced selection of 16 finalists from Phase 1 of the competition, which sought proposed theoretical solutions rather than hands-on experimentation. The submissions were reviewed by NIH scientific experts and, ultimately, by a three-judge panel composed of the directors of the sponsoring NIH components. Five of the Phase 1 finalists, including Pourmand and Blainey, were selected to share prizes totaling $88,000.

All of the Phase 1 finalists were eligible to participate in Phase 2, during which they were encouraged to execute their ideas in proof-of-concept studies. These were similarly reviewed in choosing the Phase 2 prize winners.

“The prize winners have brought some creative ideas to the study of single cells,” said NIBIB director Roderic Pettigrew, Ph.D., M.D. “We challenged competitors to develop new ways to monitor biochemical changes in individual living cells and they have demonstrated an impressive capacity for problem solving and innovation.”

“The winning solutions can have an immediate impact in research labs and will very likely lead to further innovations by these groups and others,” added NIMH director Joshua Gordon, M.D., Ph.D. “Running a prize challenge is relatively new for NIH and we are happy with the outcome. Kudos to all the solvers who participated and special congratulations to the winners.”

The winners’ own brief descriptions of their prize-winning solutions follow:

"We have developed a novel nanopipette technology that can be used to monitor the molecular properties of single cells over time. Initially, we developed the technology to monitor changes in gene expression (genomics) in single cells. Now, in addition to single-cell sequencing technology, we have integrated methods to monitor temporal changes in the phosphorylation and activation of transcription factors. This allows us to monitor the activation of different transcription factors and the array of genes each one regulates to investigate how different signaling pathways interact in controlling gene expression in a single cell. We have also integrated methods to monitor a cell's metabolic state over time by measuring intracellular pH and glucose. Thus, we can simultaneously monitor genomics, phosphoproteomics, and metabolomics in single cells. To establish the utility of this multiplexed technology, we are employing it to study a critical biological question: How do cancer cells develop drug resistance? While the proposed studies focus on the use of our nanopipette technology to study human cancer cells in culture, the cell monitoring capabilities of the nanopipette allow it to be used for in situ analysis of single cells in tissue biopsies and slices. This technology is also adaptable to instrumentation commonly used for electrophysiological measurements of single cells."

"Mammalian cell biology is dynamic, but today’s ‘omic approaches require destruction of cells to access their molecular contents and cannot resolve the full richness of cellular diversity in situ. The research community needs tools that can probe living cells in real tissues to produce high dimensional time-series data from cells of interest. Our technique entails export of cellular analytes via an engineered secretion pathway. We show that cells can self-report their internal transcriptional state in a quantitatively interpretable manner. We are working to render our approach a practically useful method for analyzing clinically relevant biological systems."

The NIH Common Fund encourages collaboration and supports a series of exceptionally high-impact, trans-NIH programs. Common Fund programs are designed to pursue major opportunities and gaps in biomedical research that no single NIH Institute could tackle alone, but that the agency as a whole can address to make the biggest impact possible on the progress of medical research. Additional information about the NIH Common Fund can be found at https://commonfund.nih.gov.

NIBIB’s mission is to improve health by leading the development and accelerating the application of biomedical technologies. The Institute is committed to integrating the physical and engineering sciences with the life sciences to advance basic research and medical care. NIBIB supports emerging technology research and development within its internal laboratories and through grants, collaborations, and training. More information is available at the NIBIB website: https://www.nibib.nih.gov.