Chicago physician James B. Herrick, M.D., published a paper in the November 1910 issue of the Archives of Internal Medicine that described the irregular shape of a patient's red blood cells " a hallmark of the condition now known as sickle cell disease. To honor Herrick's legacy and celebrate the research progress that has been made during the past 100 years, the National Institutes of Health will host the James B. Herrick Symposium " Sickle Cell Disease Care and Research Past, Present, and Future on Nov. 16 and 17 in Bethesda, Md.

"While we have made significant strides in the last century to improve the lives of those who have sickle cell disease, our work is far from over," said Susan B. Shurin, M.D., acting director of the National Heart, Lung, and Blood Institute (NHLBI), part of the NIH. "Researchers around the globe are continuing to search for better treatments to ease the significant burden of people who live with the disease and its cardinal manifestations of anemia and pain."

Treatment advances made by researchers working with volunteer participants in clinical trials, have prevented most of the complications that were life threatening in childhood even a few decades ago. In that era, children were at risk of overwhelming infection and damage to the spleen and lungs. More recent advances such as the drug hydroxyurea and the use of blood transfusions for the prevention of stroke in children now allow many people with sickle cell disease to live into their 40s, 50s, and beyond. Bone marrow transplants can cure sickle cell disease in some patients, but this treatment is limited by a scarcity of bone marrow matches.

As part of the NHLBI's continuing efforts to move important discoveries into practice, the Institute has asked a panel of the nation’s leading sickle cell experts to review the scientific evidence and create a set of clinical practice guidelines. These guidelines will target primary care providers to help them give the best possible care to those who live with sickle cell disease. The guidelines are expected to be released in 2011, supported by an NHLBI-led public awareness and education campaign.

In mid-November 2010, in conjunction with the Herrick Symposium, the public can comment on the expert panel’s draft recommendations on the use of hydroxyurea for adults with sickle cell disease. Members of the public will have the opportunity to comment on the complete draft guidelines in 2011.

Sickle cell disease affects between 70,000 and 100,000 Americans. Those who inherit this disease carry two copies of the sickle globin gene. The gene produces an abnormal hemoglobin, the protein in red blood cells that carries oxygen throughout the body. This genetic defect leads to the production of misshapen red blood cells, many of which have the sickle shape that gives the disease its name. Those who live with sickle cell disease have life-long anemia and can experience severe pain episodes known as crises. Variants of sickle cell disease occur when a person inherits a sickle globin gene from one parent and another abnormal gene, such as a thalassemia gene or hemoglobin C gene, from the other parent.

Red blood cells are normally round and smooth, which allows them to pass easily through blood vessels. Sickled cells tend to be sticky and can clump in blood vessels, which can lead in turn to blockages that trigger pain crises. If left untreated, sickle cell disease can lead to organ failure and other serious consequences.

Symptoms and complications of sickle cell disease vary widely depending on the severity of the condition. Some people have mild symptoms, while others experience severe symptoms that can require hospitalization. The disease is most prevalent in the African-American community, though individuals of Middle Eastern, Mediterranean, Central and South American, and Asian Indian heritage can develop the disease.

Part of the National Institutes of Health, the National Heart, Lung, and Blood Institute (NHLBI) plans, conducts, and supports research related to the causes, prevention, diagnosis, and treatment of heart, blood vessel, lung, and blood diseases; and sleep disorders. The Institute also administers national health education campaigns on women and heart disease, healthy weight for children, and other topics. NHLBI press releases and other materials are available online at www.nhlbi.nih.gov.

On Sept 17th, the incorrect date, listed in the original release in paragraph two, was corrected in the text above. 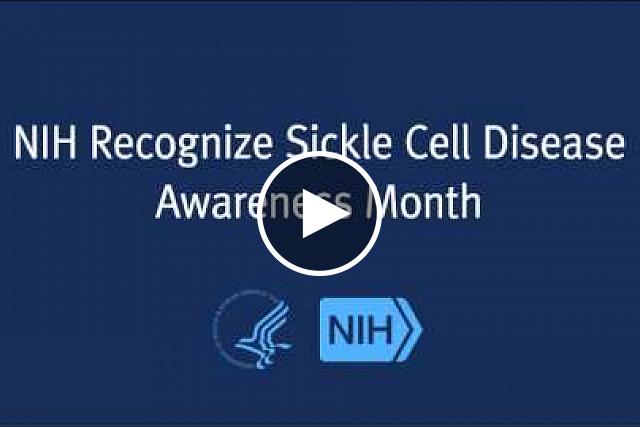 September is Sickle Cell Disease Awareness Month, with this year taking on added significance as it is the 100th anniversary of the first science paper published to describe sickle cell disease.