Based on just two questions from a newly released guide, health care professionals could spot children and teenagers at risk for alcohol-related problems. Alcohol Screening and Brief Intervention for Youth: A Practitioner's Guide, is now available from the National Institute on Alcohol Abuse and Alcoholism (NIAAA), part of the National Institutes of Health.

Developed in collaboration with the American Academy of Pediatrics, clinical researchers, and health practitioners, the guide introduces a two-question screening tool and an innovative youth alcohol risk estimator to help clinicians overcome time constraints and other common barriers to youth alcohol screening.

"We know that alcohol is by far the drug of choice among youth," says NIAAA acting director Kenneth R. Warren, Ph.D. "Underage drinking is also a marker for other unhealthy behaviors and it often goes undetected. This new tool was designed to allow busy practitioners who manage the health and well-being of children and adolescents to conduct fast, effective alcohol screens and brief interventions."

Research has shown that over the course of adolescence, the proportion of youth who have had more than just a few sips of alcohol increases dramatically, from 7 percent of 12-year-olds to nearly 70 percent of 18-year-olds. Binge drinking is dangerous and common, and increases with age. Underage drinking is associated with many adverse outcomes, ranging from immediate consequences such as academic and social problems, injuries, and death, to longer-term consequences including increased risk for alcohol dependence as well as potentially enduring functional and structural changes in the brain.

"Clinicians who care for young people are well aware of the many harms caused by underage drinking," notes Sharon Levy, M.D., M.P.H., chair of the American Academy of Pediatrics' Committee on Substance Abuse, and assistant professor of pediatrics at Harvard Medical School in Boston. "The guide takes much of the mystery out of intervening with young patients who are drinking, allowing clinicians to proceed within a clinical framework of low, moderate, or high risk. It will enable pediatricians and other clinicians who care for young people to easily incorporate alcohol screening across the care spectrum, from annual visits to urgent care."

To develop the shortest possible screening tool with the strongest evidence for predicting current and future alcohol problems in youth, NIAAA convened a working group of researchers to conduct extensive analyses of underage drinking data. Their analyses indicated that just two questions, one that asks about friends’ drinking, and another that asks about personal drinking frequency, had the greatest predictive power. Examples of these questions, which vary slightly for elementary, middle, and high school ages, include:

Friends' drinking: "Do you have any friends who drank beer, wine, or any drink containing alcohol in the past year?"

Personal drinking: "How about you--in the past year, on how many days have you had more than a few sips of beer, wine, or any drink containing alcohol?"

The friends' drinking question is an early warning signal that strongly predicts future drinking levels, while the personal drinking question is the best predictor of current risk for alcohol-related harm in adolescents who are already drinking. These questions can be asked quickly, an extremely important factor for clinicians and their patients.

"Routine screening and intervention for alcohol use in young people is critical to preventing the constellation of problems associated with adolescent drinking," says Howard K. Koh, M.D., M.P.H., assistant secretary for health in the U.S. Department of Health and Human Services. “The new adolescent alcohol screening guide developed by NIAAA provides health care professionals an opportunity to engage young patients before it is too late.”

"People who start drinking before the age of 15 are much more likely to have alcohol problems later in life than those who begin drinking at age 21 or older," adds Pamela S. Hyde, administrator of HHS’ Substance Abuse and Mental Health Services Administration. "By helping clinicians identify underage drinking early, this simple and straightforward tool will help young people avoid behaviors that prevent them from achieving their full potential."

In addition to the new two-question screen, the guide presents the first youth alcohol risk estimator chart, which combines information about a patient's age and drinking frequency to give a clinician a broad indication of the patient's chances for having alcohol-related problems. Coupled with what a clinician already knows about a patient, the risk estimator can help determine the depth and content of the clinician’s response. The guide outlines different levels of intervention, with tips for topics to cover. It also presents an overview of brief motivational interviewing, an interactive, youth-friendly intervention that is considered to have the best potential effectiveness for the adolescent population.

Alcohol Screening and Brief Intervention for Youth: A Practitioner's Guide, and its accompanying pocket-sized version, can be downloaded or ordered from the NIAAA website at www.niaaa.nih.gov. It can also be ordered from NIAAA by calling 301-443-3860. 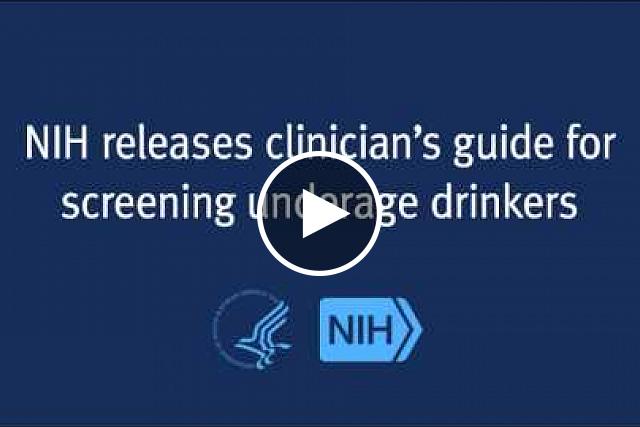 Based on just two questions from a newly released guide, health care professionals could spot children and teenagers at risk for alcohol-related problems.