Study may advance fundamental understanding of how brain cells communicate.

Brain cells talk to each other in a variety of tones. Sometimes they speak loudly but other times struggle to be heard. For many years scientists have asked why and how brain cells change tones so frequently. Today National Institutes of Health researchers showed that brief bursts of chemical energy coming from rapidly moving power plants, called mitochondria, may tune brain cell communication.

“We are very excited about the findings,” said Zu-Hang Sheng, Ph.D., a senior principal investigator and the chief of the Synaptic Functions Section at the NIH’s National Institute of Neurological Disorders and Stroke (NINDS). “We may have answered a long-standing, fundamental question about how brain cells communicate with each other in a variety of voice tones.”

The network of nerve cells throughout the body typically controls thoughts, movements and senses by sending thousands of neurotransmitters, or brain chemicals, at communication points made between the cells called synapses. Neurotransmitters are sent from tiny protrusions found on nerve cells, called presynaptic boutons. Boutons are aligned, like beads on a string, on long, thin structures called axons. They help control the strength of the signals sent by regulating the amount and manner that nerve cells release transmitters.

Mitochondria are known as the cell’s power plant because they use oxygen to convert many of the chemicals cells use as food into adenosine triphosphate (ATP), the main energy that powers cells. This energy is essential for nerve cell survival and communication. Previous studies showed that mitochondria can rapidly move along axons, dancing from one bouton to another.
In this study, published in Cell Reports, Dr. Sheng and his colleagues show that these moving power plants may control the strength of the signals sent from boutons.

“This is the first demonstration that links the movement of mitochondria along axons to a wide variety of nerve cell signals sent during synaptic transmission,” said Dr. Sheng.

The researchers used advanced microscopic techniques to watch mitochondria move among boutons while they released neurotransmitters. They found that boutons sent consistent signals when mitochondria were nearby.

“It’s as if the presence of mitochondria causes a bouton to talk in a monotone voice,” said Tao Sun, Ph.D., a researcher in Dr. Sheng’s laboratory and the first author of the study.

Surprisingly, when the mitochondria were missing or moving away from boutons, the signal strength fluctuated. The results suggested that the presence of stationary power plants at synapses controls the stability of the nerve signal strength.

“It’s known that about one third of all mitochondria in axons move. Our results show that brain cell communication is tightly controlled by highly dynamic events occurring at numerous tiny cell-to-cell connection points,” said Dr. Sheng.

In separate experiments the researchers watched ATP energy levels in these tiny boutons as they sent nerve messages.

“The levels fluctuated more in boutons that did not have mitochondria nearby,” said Dr. Sun.

The researchers also found that blocking ATP production in mitochondria with the drug oligomycin reduced the size of the signals boutons sent even if a mitochondrial power plant was nearby.

“Our results suggest that local ATP production by nearby mitochondria is critical for consistent neurotransmitter release,” said Dr. Sheng. “It appears that variability in synaptic transmission is controlled by rapidly moving mitochondria which provide brief bursts of energy to the boutons they pass through.”

Problems with mitochondrial energy production and movement throughout nerve cells have been implicated in Alzheimer’s disease, Parkinson’s disease, amyotrophic lateral sclerosis, and other major neurodegenerative disorders. Dr. Sheng thinks these results will ultimately help scientists understand how these problems can lead to disorders in brain cell communication.

NINDS is the nation’s leading funder of research on the brain and nervous system. The NINDS mission is to reduce the burden of neurological disease – a burden borne by every age group, by every segment of society, by people all over the world.;

This study was funded by the NINDS’ Division of Intramural Research. For more information, please visit: http://intra.ninds.nih.gov 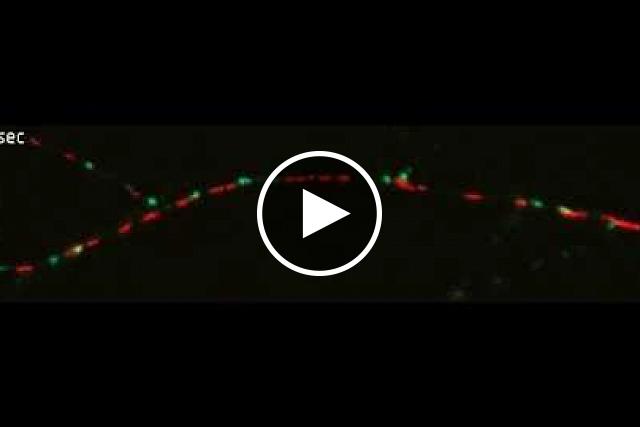