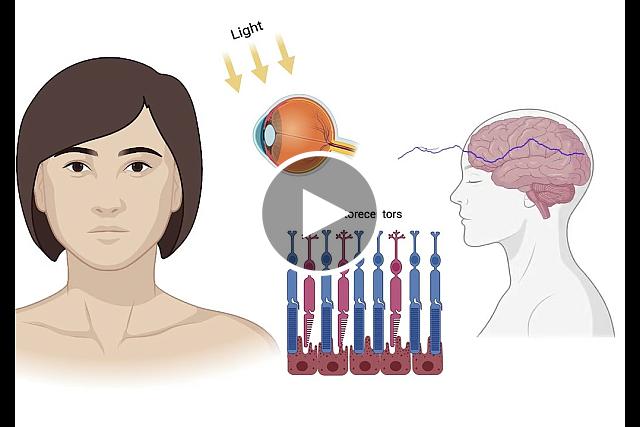 Scientists have discovered a mechanism by which an area of a protein shape-shifts to convert vitamin A into a form usable by the eye’s light-sensing photoreceptor cells. A previously uncharacterized area of the protein known as RPE65 spontaneously turns spiral-shaped when it encounters intracellular membranes, or thin structures that surround different parts of a cell.

This shapeshifting enables RPE65 to enter the endoplasmic reticulum – a network of sac-like structures and tubes – where RPE65 performs the crucial task of vitamin A conversion. The scientists say the discovery provides better understanding of RPE65’s function and will inform potential treatments for vision disorders linked to RPE65 gene mutations.  Researchers at the National Eye Institute, part of the National Institutes of Health, conducted the research, which published in Life Science Alliance.

Vision occurs when light hits photoreceptor pigments called opsins, triggering a series of chemical reactions that generate signals to the brain. The retinal pigment epithelium (RPE), a support tissue next to the photoreceptors, recharges opsins to restore their sensitivity to light. In a process known as the visual cycle, RPE65 is essential to convert the spent vitamin A derivative all-trans retinol, back into photosensitive 11-cis retinal. Mutations in the RPE65 gene are associated with early-onset severe blinding disorders.

“Methods such as crystallography, which we use to visualize the atoms of a protein in crystal form, failed to give us a complete picture of RPE’s structure with this crucial region missing” said Sheetal Uppal, Ph.D., a research fellow at NEI and the study’s first author. “We had to think of a new strategy to characterize this aspect of RPE65’s structure, so we turned to biochemistry.”

The NEI team discovered that in aqueous solution, a specific region of RPE65 lacks structure, but when it encounters membranes, it spontaneously forms an amphipathic alpha-helix – a special sort of spiral shape in proteins. This change enables RPE65 it to bind to the RPE cells’ endoplasmic reticulum membrane where 11-cis retinal is produced from all-trans retinol.

More than that, when a single specific amino acid within the previously uncharacterized region of RPE65 was modified by a specific lipid, it greatly expedited the formation of the alpha-helix, “locking” it into place, and facilitating its insertion into the cell membrane. This was something never seen before in a protein, according to Uppal.

Computer modeling of the molecular dynamic simulations was supportive of their results. “Our findings solve a longstanding puzzle in RPE65’s structure, clarifying its function, while expanding our knowledge of membrane-binding in a way that we hope will inform disease models in more accurate ways.”

This press release describes a basic research finding. Basic research increases our understanding of human behavior and biology, which is foundational to advancing new and better ways to prevent, diagnose, and treat disease. Science is an unpredictable and incremental process— each research advance builds on past discoveries, often in unexpected ways. Most clinical advances would not be possible without the knowledge of fundamental basic research. To learn more about basic research, visit https://www.nih.gov/news-events/basic-research-digital-media-kit.