Study may advance understanding of how brain cell tubes are modified under normal and disease conditions.

Fantastic Voyage. NIH scientists watched the inside of brain cell tubes, called microtubules, get tagged by a protein called TAT. Tagging is a critical process in the health and development of nerve cells.Roll-Mecak lab, NINDS, Bethesda, MD

In a new study, scientists at the National Institutes of Health took a molecular-level journey into microtubules, the hollow cylinders inside brain cells that act as skeletons and internal highways. They watched how a protein called tubulin acetyltransferase (TAT) labels the inside of microtubules. The results, published in Cell, answer long-standing questions about how TAT tagging works and offer clues as to why it is important for brain health.

Microtubules are constantly tagged by proteins in the cell to designate them for specialized functions, in the same way that roads are labeled for fast or slow traffic or for maintenance. TAT coats specific locations inside the microtubules with a chemical called an acetyl group. How the various labels are added to the cellular microtubule network remains a mystery. Recent findings suggested that problems with tagging microtubules may lead to some forms of cancer and nervous system disorders, including Alzheimer’s disease, and have been linked to a rare blinding disorder and Joubert Syndrome, an uncommon brain development disorder.

“This is the first time anyone has been able to peer inside microtubules and catch TAT in action,” said Antonina Roll-Mecak, Ph.D., an investigator at the NIH’s National Institute of Neurological Disorders and Stroke (NINDS), Bethesda, Maryland, and the leader of the study.

Microtubules are found in all of the body’s cells. They are assembled like building blocks, using a protein called tubulin. Microtubules are constructed first by aligning tubulin building blocks into long strings. Then the strings align themselves side by side to form a sheet. Eventually the sheet grows wide enough that it closes up into a cylinder. TAT then bonds an acetyl group to alpha tubulin, a subunit of the tubulin protein.

Some microtubules are short-lived and can rapidly change lengths by adding or removing tubulin pieces along one end, whereas others remain unchanged for longer times. Recognizing the difference may help cells function properly. For example, cells may send cargo along stable microtubules and avoid ones that are being rebuilt. Cells appear to use a variety of chemical labels to describe the stability of microtubules.

“Our study uncovers how TAT may help cells distinguish between stable microtubules and ones that are under construction,” said Dr. Roll-Mecak. According to Dr. Roll-Mecak, high levels of microtubule tagging are unique to nerve cells and may be the reason that they have complex shapes allowing them to make elaborate connections in the brain.

For decades scientists knew that the insides of long-lived microtubules were often tagged with acetyl groups by TAT. Changes in acetylation may influence the health of nerve cells. Some studies have shown that blocking this form of microtubule tagging leads to nerve defects, brain abnormalities or degeneration of nerve fibers. Since the discovery of microtubule acetylation, scientists have been puzzled about how TAT accesses the inside of the microtubules and how the tagging reaction happens.

To watch TAT at work, Dr. Roll-Mecak and her colleagues took high resolution movies of individual TAT molecules interacting with microtubules in real time. They saw that TAT surfs through the inside of microtubules and although it can find acetylation sites quickly, the process of adding the tag occurs very slowly.

In general, tagging reactions work like keys fitting into locks: the better the key fits, the faster the lock can open. Similarly, the rate of the reactions is determined by how well TAT molecules fit around tagging sites.

Dr. Roll-Mecak’s team investigated this idea by using a technique called X-ray crystallography to look at how atoms on TAT molecules interact with acetylation sites on tubulin molecules. Their results suggested that TAT fit poorly around the sites.

“It looks as though TAT can easily journey through microtubules spotting acetylation sites but may only label those that are stable for longer periods of time,” said Dr. Roll-Mecak.

This may help cells identify the microtubules they need to rapidly change shapes or send cargo to other places. Further studies may help researchers understand how microtubule tagging influences nerve cells in health and disease.

Part of the National Institutes of Health, the National Heart, Lung, and Blood Institute (NHLBI) plans, conducts, and supports research related to the causes, prevention, diagnosis, and treatment of heart, blood vessel, lung, and blood diseases; and sleep disorders. The Institute also administers national health education campaigns on women and heart disease, healthy weight for children, and other topics. NHLBI press releases and other materials are available online at http://www.nhlbi.nih.gov. 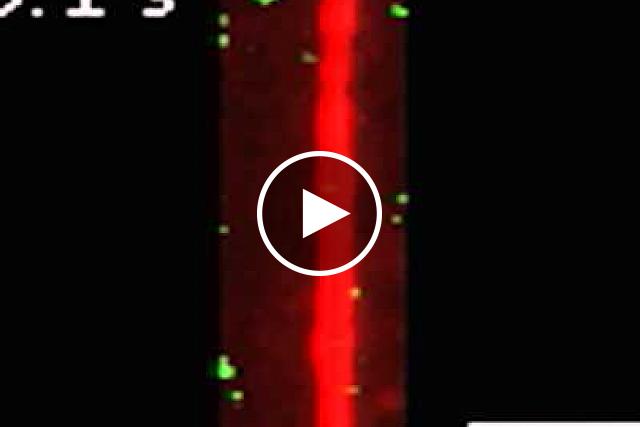 Researchers watched TAT proteins (green) journey into microtubules (red). TAT proteins are known to label the insides of the tubes. They observed that TAT can move quickly, back and forth, through microtubules while searching for sites to label. Video courtesy of the Roll-Mecak lab, NINDS.