A landmark study in mice identifies a biological mechanism that could help explain how tobacco products could act as gateway drugs, increasing a person's future likelihood of abusing cocaine and perhaps other drugs as well, according to the National Institute on Drug Abuse (NIDA), part of the National Institutes of Health. The study is the first to show that nicotine might prime the brain to enhance the behavioral effects of cocaine.

The gateway drug model is based upon epidemiological evidence that most illicit drug users report use of tobacco products or alcohol prior to illicit drug use. This model has generated significant controversy over the years, mostly relating to whether prior drug exposure (to nicotine, alcohol or marijuana) is causally related to later drug use. Before now, studies have not been able to show a biological mechanism by which nicotine exposure could increase vulnerability to illicit drug use.

In the current study, by researchers at Columbia University, New York City, and published in today’s Science Translational Medicine, mice exposed to nicotine in their drinking water for at least seven days showed an increased response to cocaine. This priming effect depended on a previously unrecognized effect of nicotine on gene expression, in which nicotine changes the structure of the tightly packaged DNA molecule, reprograms the expression pattern of specific genes, in particular the FosB gene that has been related to addiction, and ultimately alters the behavioral response to cocaine.

To examine whether the results from this study paralleled findings in humans, the researchers reexamined statistics from the 2003 National Epidemiological Study of Alcohol Related Consequences to explore the relationship between onset of nicotine use and degree of cocaine dependence. They found that the rate of cocaine dependence was higher among cocaine users who smoked prior to starting cocaine compared to those who tried cocaine prior to smoking.

These findings in mice suggest that if nicotine has similar effects in humans, effective smoking prevention efforts would not only prevent the negative health consequences associated with smoking but could also decrease the risk of progression and addiction to cocaine and possibly other illicit drug use. In the meantime, this mouse model provides a new mechanism to study the gateway theory from a biological perspective.

"Now that we have a mouse model of the actions of nicotine as a gateway drug this will allow us to explore the molecular mechanisms by which alcohol and marijuana might act as gateway drugs," said Eric Kandel, M.D., of Columbia University Medical Center and senior author of the study. "In particular, we would be interested in knowing if there is a single, common mechanism for all gateway drugs or if each drug utilizes a distinct mechanism."

The study, and a perspective by NIDA Director Dr. Nora D. Volkow, can be found online at http://stm.sciencemag.org .

The National Institute on Drug Abuse is a component of the National Institutes of Health, U.S. Department of Health and Human Services. NIDA supports most of the world's research on the health aspects of drug abuse and addiction. The Institute carries out a large variety of programs to inform policy and improve practice. Fact sheets on the health effects of drugs of abuse and information on NIDA research and other activities can be found on the NIDA home page at www.drugabuse.gov. To order publications in English or Spanish, call NIDA's DrugPubs research dissemination center at 1-877-NIDA-NIH or 240-645-0228 (TDD) or fax or email requests to 240-645-0227 or drugpubs@nida.nih.gov. Online ordering is available at http://drugpubs.drugabuse.gov. NIDA's media guide can be found at http://drugabuse.gov/mediaguide. 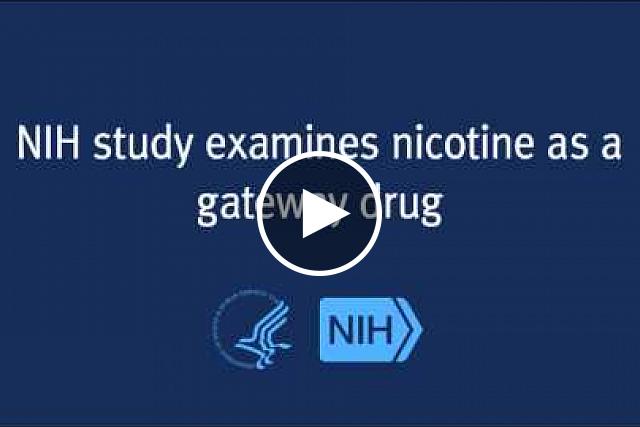 NIH-funded research in mice shows that nicotine primes the brain to enhance cocaine’s effects. This study identifies a biological mechanism, supporting epidemiological evidence that nicotine is a gateway drug.