Symptoms reduced in children and young people with moderate to severe disease.

A drug that targets the antibody immunoglobulin E (IgE), a key player in asthma, nearly eliminated seasonal increases in asthma attacks and decreased asthma symptoms among young people living in inner city environments, a clinical trial sponsored by the National Institutes of Health has found.

The findings will appear in the March 17 issue of the New England Journal of Medicine.

This investigational use of the drug omalizumab, sold under the brand name Xolair, was conducted in eight U.S. cities by the Inner City Asthma Consortium (ICAC), a nationwide clinical trials network supported by the National Institute of Allergy and Infectious Diseases (NIAID), part of NIH. Additional support for this research was provided by the NIH National Center for Research Resources and Novartis Pharmaceuticals Corporation.

“We know that treatment based on NIH asthma guidelines is generally effective in managing the disease, but many patients still experience asthma attacks requiring visits to emergency rooms and hospitalizations,” says NIAID Director Anthony S. Fauci, M.D. “The results of this study are extremely promising because they show that the addition of omalizumab to the NIH guidelines-based therapy for asthma offers improved asthma control and the potential to decrease the burden of this chronic disease in children and adolescents.”

In the United States, asthma affects approximately 18 million adults and 7 million children under the age of 18. Symptoms include wheezing, coughing, chest tightness and shortness of breath, any of which can be provoked by viral infections, allergens and air pollution. The number of asthma attacks rises in the spring and fall seasons when more allergens are in the air and the occurrence of respiratory viruses increases.

The primary goal of the study was to determine if adding omalizumab to NIH guidelines-based asthma therapy reduced the number of days that participants experienced any asthma-related symptoms. Another aim was to find out if the addition of omalizumab could also reduce the number of severe asthma attacks.

In addition to standard therapy, half of the participants were assigned at random to receive omalizumab, and the other half a placebo. Drug or placebo was delivered via an injection under the skin every two to four weeks over the 60-week period of study.

As the trial proceeded, participants returned to the clinic every three months for evaluation of their symptoms. As needed, their non-trial medications were adjusted according to the NIH asthma treatment guidelines.

"The spike in asthma attacks in the fall, which is associated with colds and other viral airway infections, disappeared in the kids in the omalizumab group," says William Busse, M.D., the principal investigator of ICAC and professor of medicine at the University of Wisconsin-Madison. "Because the drug specifically targets IgE, which is the antibody responsible for allergies, our observations show the possible interplay between allergies, respiratory viruses and IgE in provoking asthma attacks."

Omalizumab is a humanized monoclonal antibody, a pure form of a single protein, custom-made for use in humans, which binds to and blocks the activity of IgE, an important molecule in allergy. When allergens bind to IgE on the surface of certain immune cells, these cells release substances that cause allergic reactions. In the airways, these substances trigger the muscles to contract, trapping air inside the lungs and causing difficulty breathing.

“We continue searching for therapeutic strategies to reduce the enormous burden of asthma. Following on the findings reported here, ICAC studies now under way will help us to determine if adding omalizumab only during the period before fall seasonal asthma symptoms occur, rather than throughout the year, results in the same successful disease management,” says Daniel Rotrosen, M.D., director of NIAID's Division of Allergy, Immunology and Transplantation, which oversees the ICAC program.

Omalizumab is approved in the United States for patients ages 12 and older with moderate to severe persistent allergic asthma. The drug is jointly developed by Genentech Inc., a member of the Roche group, under an agreement with Novartis Pharma AG. Patients who are interested in adding omalizumab to their current asthma treatment should speak with their health care professional. For more information about omalizumab, visit www.xolair.com .

The NIH Guidelines for the Diagnosis and Management of Asthma can be viewed or downloaded at www.nhlbi.nih.gov/guidelines/asthma/.

The National Center for Research Resources (NCRR), a part of NIH, provides laboratory scientists and clinical researchers with the resources and training they need to understand, detect, treat and prevent a wide range of diseases. NCRR supports all aspects of translational and clinical research, connecting researchers, patients and communities across the nation. For more information, visit www.ncrr.nih.gov.

NIAID conducts and supports research—at NIH, throughout the United States, and worldwide—to study the causes of infectious and immune-mediated diseases, and to develop better means of preventing, diagnosing and treating these illnesses. News releases, fact sheets and other NIAID-related materials are available on the NIAID Web site at www.niaid.nih.gov.

WW Busse et al. A randomized trial to evaluate the impact of the addition of omalizumab to guidelines based therapy of inner-city children and adolescents with asthma. New England Journal of Medicine. DOI: 10.1056/NEJMoa1009705 (2011). 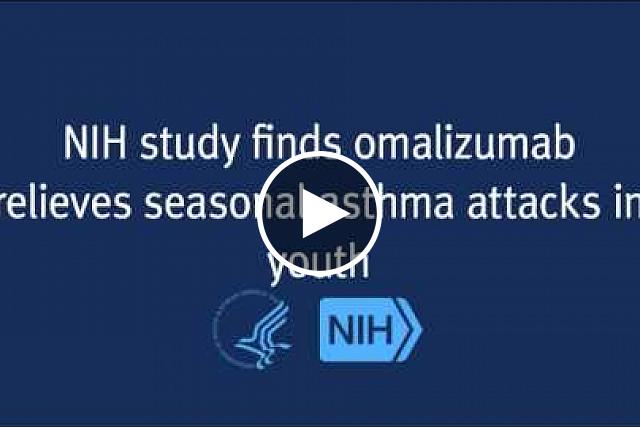 A study of the drug omalizumab, sold under the brand name Xolair, has been conducted in eight U.S. cities by the Inner City Asthma Consortium (ICAC), a nationwide clinical trials network supported by the National Institute of Allergy and Infectious Diseases. Results show it nearly eliminated seasonal increases in asthma attacks and decreased asthma symptoms among young people living in inner city environments. The findings appear in the March 17 issue of the New England Journal of Medicine.